In his remarkable book The Divine Name(s) and the Holy Trinity, Kendall Soulen pays very close attention to the way the revealed name of God (the Tetragrammaton) functions in the Bible and in Christian theology.

If you’re reading the Old Testament in an English translation of the Bible, you’ll see the four-letter name of God (represented in transliterated form as YHWH) concealed behind the typographical convention of all caps: “The LORD said to my Lord…” (Ps. 110:1).  Any time a word shows up all caps, it’s like a Geiger counter going off: you know the holy name is buried there in the original language.

But when you get to the New Testament, you no longer get these all-caps alerts that God’s name is present. Even when the New Testament quotes the Old Testament, it flattens out the Hebrew distinction: “The Lord said to my Lord….”  That happens in our English translations because they faithfully represent what has already happened in the Greek text.  As long ago as the Septuagint, the divine name had been rendered simply with the title “Lord.” For a long time, scholars have said things like what Soulen quotes C.H. Dodd as saying: the Septuagint made monotheism easier to grasp “by merely eliminating the name of God.” The divine name may be sticking out of your Hebrew text, but not the Greek version of the Old Testament, or (downstream from such translation decisions) the Greek New Testament.

But Soulen points out that conclusions like this are guilty of ignoring the actual documentary evidence. If you look at the actual Bible texts we have from the early Christian period, you don’t find a flattened-out approach to the holy name. What you find instead are all sorts of weird ways of signifying that God’s name is special: Greek texts that drop Hebrew letters in, special ways of writing the divine name, and above all a kind of holy abbreviation system marking out the “holy names,” the nomina sacra.

Soulen does an excellent job of explaining all of this polyglot stuff in English. His most telling example is from 1 Corinthians 8:6, where Paul argues that there are lots of gods out there, but only one true God. When the scribes copied down that argument of Paul, they treated “gods” and “God” differently. Not, as we do, with an initial capital letter, but with something more striking. They did an abbreviation with a line over the top. Here’s how Soulen shows the passage in English:

Soulen notes that “this representation is based upon the text as it actually appears in Codex Sinaiticus.” He admits in a footnote that he cleaned things up a bit (there’s a nettlesome textual variant here). But here’s that passage from Sinaiticus: 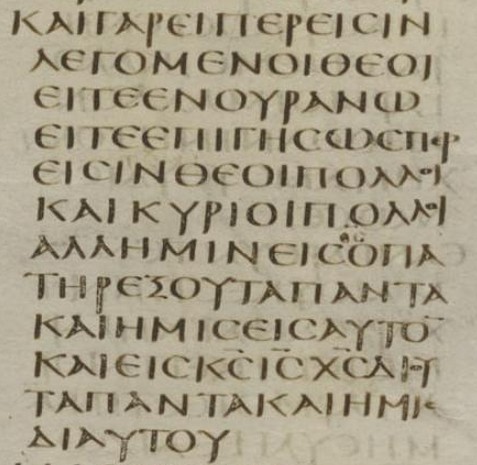 Even if you don’t read Greek, you can see that in the third line from the bottom, there are some funny horizontal lines over certain pairs of letters: those are the letters that look like KC, IC, XC, which are abbreviations for kurios iesous christos, KS IS XS, or LD JS CT as Soulen has it.

It’s interesting to think that early Christians had certain Bible-reading aids that we don’t have: holy names marked out typographically (if that word applies to hand-written documents). We are used to thinking of how many advantages we have in modern Bibles, and we’re right: I love those spaces between the words! But in the earliest New Testament documents we have, there is a special way of handling holy names, and that way is not one that we have chosen to incorporate into English translations.

Perhaps you’ve already noticed one of the most important things about this nomina sacra abbreviation trick: it is not only applied to the name “God,” but also to “Lord,” “Jesus,” and “Christ.” You can see, in the text above, a claim about the divine dignity of Christ.

In fact, the scribes who produced Sinaiticus got downright trinitarian with this abbreviation convention. Check out 2 Corinthians 13:14, “the grace of the Lord Jesus Christ, and the love of God, and the communion of the Holy Spirit be with you all:”

In the top line you can see KY IY XY (Lord Jesus Christ) again, and the first two letters of the third line are a theta and an upsilon for theou, God (or GD as Soulen would show it). But look at the fourth line down, toward the end: there’s a bar over the PN for pneuma, that is, the Spirit in Holy Spirit. This great trinitarian benediction has three names singled out to get the abbreviation-bar treatment: the Lord Jesus Christ, God, and the Spirit.

I’ve simplified a lot of the evidence here, even from Soulen’s careful simplification of it. More detail can be found by consulting the endnotes in Soulen’s book. But these nomina sacra really bring some new evidence to discussions of early Christian thought on the Trinity, and on how the name of God is to be approached.