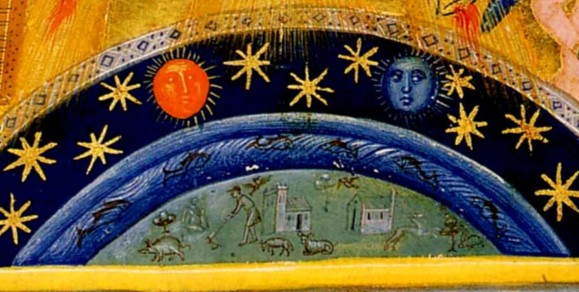 Just a few thoughts here, brief notes on how a doctrine of creation ought to be handled in systematic theology. I state them as theses, as if I am declaring how every theologian ought to handle the doctrine. But really I’m talking to myself in public.

1. Work backwards. The doctrine of creation occurs early in the sequence of traditional theological topics (Method –> Revelation –> God –> Creation –> Fall, etc). But if it is to be a Christian doctrine, rather than a general reflection on the world, it needs to be informed by categories that will only emerge in the later doctrines. One way to judge the success of a doctrine of creation is how well it does at taking its shape from later doctrinal pressures. Put another way, since the doctrine of creation occurs early in a big book of doctrine, it can be used preemptively to solve problems that would otherwise emerge later.

2. The purpose of creation is to have communion with what is beyond creation, God. Its purpose is not to turn into anything beyond creation (no deification, no exaltation to supernature), but to remain creation and commune with the Creator.

3. No need or compulsion forces God to create. When God creates, it is an extension and overflow of his inner plenitude, and it is a logical one. What God does outwardly lines up with, and makes sense in light of, what God eternally is. But before creation, or without creation, God was already complete and perfect as Father, Son, and Holy Spirit.

4. Begetting sharpens “creation from nothing.” In the conflict with Arianism, the early church learned the intellectual habit of insisting that the Son was above the line that distinguished God from not-God. In the process of working out the doctrine of the Trinity, in other words, we got a clearer doctrine of creatio ex nihilo as a bonus. The Son of God is, in Nicaea’s words, “Begotten, not made.” This contrast tells us something about the begotten one, but also something about that which is made.

5. Creation from nothing is the only creation properly so called. After causing the initial existence of all that is, God mostly produces things by distinguishing, delegating (“let the earth bring forth”), and shaping materials at hand (“formed man from the dust of the ground”). All this other work, loosely called creation, is perhaps better described as forming or crafting. It is ex vetera, from old (existing) things, not ex nihilo. This opens up a lot of space for talking more concretely about God creating everything in general, but crafting each thing in particular (in various ways).

6. Most general revelation isn’t revelation. There is such a thing a knowledge of God that everybody gets from creation. But Scripture tends to describe this knowledge as imparted by the created things rather than by God. We should think harder about how nature communicates truths about God to us, without slipping into talk about God speaking through nature. There is a big difference between God speaking through trees, and trees telling us about God. I tend to believe whatever mountains tell me, but it’s the word of mountain, not the word of God.

7. Humanity is the capstone of the work of creation. God is its center, angels are its highest point, Sabbath is its fruition, and earth has its own dignity considered apart from humanity. But humanity is the goal God worked toward for six days. Of each created thing, he said, “It is good,” but when he made man, he made a summary statement about all his works so far: “Very good.”

8. The created world is a gift given, because love wanted something to give. What God says to his human creation is, “here.” The world is the here that he gives.

9. The created world is a gift given back to God. Worship and thanksgiving are the proper human modes of being. In giving the world to God through worship, humanity acts in a priestly manner, bringing all creation into the love between God and his human creation. Saying that humanity is a priesthood is not saying that we offer praise on behalf of the world. We offer worldy praise on our own behalf. Squirrels either have their own priests or don’t need any.

10. The created world is a means of grace. God gives himself to us through every thing that is a thing. Calling this relationship “sacramental” misses the point, adds nothing legitimate, and distracts. Sacraments are sacraments. Creation is full of things, and God uses things.

11. Heaven is created, and is above earth. God didn’t just make “everything” or “the cosmos.” He made a differentiated unity, “the heavens and the earth.” The heavens are (1) the cloudy sky, (2) the starry expanse, and (3) the exalted but created place within the invisible world, from which God rules. Earthly life happens not just under God, but under a created ceiling. Heaven is the angel place, earth is the human place.