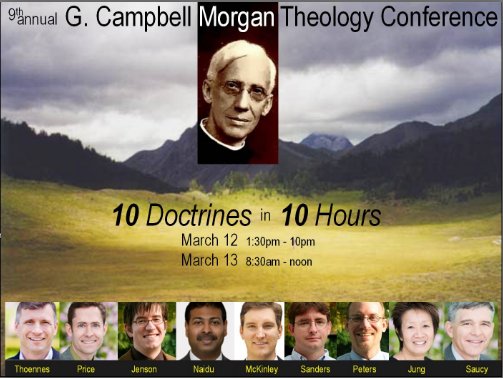 What if you could survey the entire scope of Christian doctrine at once: a brief enough summary to show the whole thing at a glance, but with enough detail to see the various parts and how they relate to each other?

As a stand-alone experience, that wouldn’t be especially valuable: it would be too much information, too fast, without enough emotional and experiential time for processing it. It would stuff your head full of bits of information, giving you intellectual indigestion and spiritual malnutrition all at once. Knowledge puffeth up, the mind can only retain what the seat can endure, book-larnin’ ain’t the same as wisdom, and all that.

This past weekend the freshmen and sophomores of Biola’s Torrey Honors Institute got exactly that: A high-altitude survey of Christian doctrine, at the ninth annual G. Campbell Morgan Theology Conference. In ten hours of lectures, we cover the ten major doctrinal areas, pointing out the major features, providing the key terms, and especially describing the relationships among the various topics. These students are used to a very Socratic and interactive style of learning, so the conference complements that with ten hours of relatively passive reception of information.

The lecturers are nine different theologians from Biola’s campus, drawn from Talbot School of Theology, the undergraduate Bible department, and the Torrey Honors Institute. I’ve organized and attended this event for nine years now, and it’s always worth my time to see some of the best theologians I know packing wisdom from decades of study into their 55 allotted minutes.

I didn’t take notes adequate to show the actual structure of the individual presentations, but here are a few quotes that stood out to me.

Erik Thoennes on Prolegomena and the Doctrine of Scripture (2 hours for our quarterback):

“This is not some vague, detached, dispassionate study. We are here to persuade one another that God is who he is.”

“According to the weakness of our knowledge is the slightness of all our acts toward God…Unless we understand his holiness, we shall leap from sin to duty.” -Stephen Charnock

“The world will do everything it can to reduce your Christianity to mere ethics.”

“The final question of theology is always, ‘Am I being obedient to Jesus?'”

“Good lovers are students of the beloved. I’ve thought about re-naming my theology 1 class “Good Lovin’ 101.”

“People talk about following Jesus but not believing the Bible, as if that’s possible.”

Rob Price on God and the world:

“By giving the world a little breathing room from God, you give the world freedom to be in relation to God.”

“The very creative command, ‘Let there be,’ is also a liberating command. It sets the world free to be what it is.”

“Obedience to God’s commands is the liberation of the creature.”

“The ultimate outcome of the Arian system… is a Christ suspended between God and man. It interprets God deistically, man moralistically, and Christ mythologically.”

“Deism, moralism, and a mythological Jesus: these are the three marks of counterfeit Christianity. Anywhere you see one of them, look around for the other two.”

“Do you know what kind of mind it takes to know the mind of God? A divine one!”

“If the doctrine of the Trinity falls, salvation falls right along with it.”

Matt Jenson on humanity and sin:

“Even describing humanity is an act of faith and hope.”

“If we seek to know what it is to be human by looking at ourselves, we will utterly fail. Self-knowledge is mediated… ultimately, as Bonhoeffer reminds us, through Christ.”

“A Christian lives not in himself, but in Christ and his neighbor.” –Luther

“To be human is to be one of those for whom God is.”

“There’s a feminist objection to the classical doctrine of sin that goes like this: Pride might be the chief form of sin for men, but not for women. I am hearing a lot of high-pitched laughter right now.”

“Jesus Christ is the most titled man in human history.”

“We often think that ‘Son of Man’ means the humanity of Christ. But in the Bible, the Son of Man is a being whose sphere of operations is heaven.”

“Luke desribes the departure of Jesus, Daniel saw the arrival of Jesus in heaven.”

“The name at which every knee shall bow is not the personal name Jesus, but the title Lord.”

John McKinley on the Holy Spirit:

“The Holy Spirit glorifies the Father and the Son. That tells us something. When we are being humble toward authority, we are being like God.”

“The Holy Spirit is a person. The Bible says all kinds of things about him that could not be said about some sort of magic.”

“The Spirit says to Philip, ‘go talk to that guy there.’ I think if we don’t hear from God like this, we need to pray.”

(I was unable to take notes on this lecture. I’m sure it was brilliant stuff with many quotable passages, though.)

Greg Peters on the church:

“The church as we see it is made up of the saved and unsaved. The church as God sees it is the actual totality of the redeemed.”

“We don’t have to run around the world asking where the church is. Calvin reminds us that wherever the word of God is preached purely and the sacraments administered, there is the church.”

“We are divided on the sacraments. That doesn’t eliminate our unity, just our uniformity.”

“Sanctification means being set apart FROM something, and also set apart TO something. It has a purpose.”

“God is initating, and our part is to respond. We never have to dream up anything, we just have to be attentive.”

“What God creates, he creates with integrity. That’s why you never find strawberries inside of banana peels.”

“Sometimes the phrase ‘spiritual disciplines’ puts the focus on what I need to do, and can become legalistic. ‘Means of grace,’ the term the Puritans would use, recognizes God’s power better.”

“Eschatology matters because only God knows the future.”

“It means something that the Jews have survived. This tribe descended from a wandering Aramean is still around. Where are the Canaanites and Hittites and all the other -ites and -bites of the ancient near east?”

“We love stories about kings, don’t we? The story of the Bible is the story of a king.”

“The vision at the beginning of Revelation? That’s what we call Scary Jesus. But that’s the one who reaches out his hand.”

Some of these quotes are approximate, subject to my ability to jot them down as we went along. And all of them are out of context. But it was a great weekend of theology.