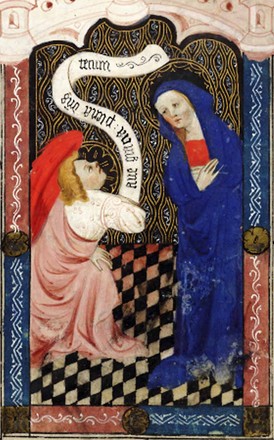 In the story of Gabriel’s annunciation to Mary, there’s a bit of wordplay that doesn’t show up well in English. It’s a little Greek punning between the angel and the virgin.

He says to her, “the child to be born will be called holy –the Son of God. And behold, your relative Elizabeth in her old age has also conceived a son, and this is the sixth month with her who was called barren. For nothing will be impossible with God.”

And she replies to him, “Behold, I am the servant of the Lord; let it be to me according to your word.”

But what Gabriel actually says to Mary in Greek, if we turn it into just barely English, is more like “for no word from God is impossible” (hoti ouk adunatesei para tou theou pan rhema). Which is why Mary responds that what happens to her should be according to the messenger’s word: Because he just said, “No word of God is impossible.”

Now as it turns out, “no word” is kind of idiomatic, like “no way” is in English. When I say “no way,” I’m not talking about a path or a road, and if you were translating my sentence into another language, it would be wrong to render it with words for path or road. That’s the kind of mistake robot translators make, turning “no way, man” into “there is not a road, human.” So almost every translation renders Gabriel’s strong summary statement as, “Nothing shall be impossible with God.”

But even though that’s the right way to translate Gabriel’s message, the fact that Mary’s response plays off of the word “word” means we’re losing a little something in the translation. A few translators can’t stand the loss, so they accept the trade off of looking like they don’t get idioms: “For with God no word shall be impossible.”

Rudolf Stier translated it that way, and defended himself thus:

Certainly we may render the passage with equal grammatical propriety ‘no thing,’ only Mary uses the former expression in her reply: ‘Be it unto me according to thy word,’ so that the real meaning seems to be –No word of divine promise, statement, or announcement, is impossible. All that God says and wills he can also perform. (Stier, The Words of the Angels, p. 36)

Since the annunciation is all about God keeping his ancient promise, it’s appropriate to draw extra attention to the word he gives.

No word from God will be impossible — Let it be according to his word.