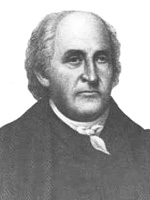 Today (June 3) is the day Philip William Otterbein was born in 1726. Otterbein was a German Reformed pastor who moved from Prussia to the American colonies in 1752, where he ministered until his death in 1813.

Otterbein presided over a conference of ministers in 1800 which led to the formation of the United Brethren in Christ denomination, but he himself never left the German Reformed church. The main stock of the old United Brethren denomination was one of the groups that merged to form the United Methodist Church.

Otterbein was a warm-hearted evangelical, whose pastoral work included training laypeople to do the work of the ministry, organizing prayer meetings, preaching evangelistically in the open air, and networking with evangelical ministers from other denominations. He was especially close in spirit to Martin Boehm the Mennonite, and Francis Asbury the Methodist.

I don’t know much about Otterbein’s own writings, but if you read Francis Asbury’s journal, you keep catching glimpses of Otterbein that let you know what kind of pastor he was. Here are a few of Asbury’s references to him.

Mar. 28, 1775: “I dined with Mr. Otterbein, the minister mentioned above, and spent the afternoon with him and Mr. Swope, another minister of the same profession. They both appear to be sincerely religious, and intend to make proposals to the German synod this year to lay a plan for the reformation of the Dutch congregations.”

June 19, 1776: “Spent some time with Mr. Otterbein. There are very few with whom I can find so much unity and freedom in conversation as with him.”

Mar. 22, 1813: “A heavy ride brought us to Baltimore. I gave an evening to the great Otterbein. I found him placid and happy in God. He says the commentators are mistaken, that the vials are yet to be poured out.” (this was the last meeting between Asbury and Otterbein before the latter’s death)

Mar. 24, 1814: “The holy, the great Otterbein… Forty years have I known the retiring modesty of this man of God, towering majestic above his fellows in learning, wisdom, and grace, yet seeking to be known only of God and the people of God. He had been sixty years a minister, fifty years a converted one. My mind is deeply impressed with the worth of souls and value of time.”