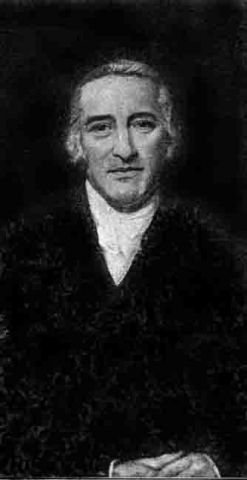 It’s a phrase Charles Simeon used fairly often in his preaching career, usually toward the end of a sermon in order to double-underline his point. “Permit me, then, to address you as dying persons, and to ask what you will think of these things when standing on the bring and precipice of eternity?”

He uses it to great effect in his sermon On Justification by Faith (reprinted in Let Wisdom Judge: University Addresses and Sermon Outlines). The sermon starts out cautiously enough, with Simeon rescuing the Reformation slogan “justification by faith” from some of the “so many misconceptions, not to say misrepresentations also,” against which it constantly labors. Justification by faith points to God’s express promises as written in his word; not to “a mere persuasion of the mind.” He then carefully places good works in their proper place in the Christian life, well away from justification. And then there are definitions: “We consider justification as an act of sovereign grace and mercy, vouchsafed to sinners on account of what the Lord Jesus Christ has done and suffered for them, and in no respect on account of their own merits or deserts. And it is solely through faith in our Lord Jesus Christ that we do, or ever can, obtain this mercy at God’s hands.” Then the bulk of the sermon is scriptural exposition: The Old Testament, the teaching of Jesus, of Paul and (yes!) of James.

And as he brings the sermon to a conclusion, he asks his listeners if they would stake their status before God on anything else: on their own works? On the depth of their repentance? On a combination of their works, their repentance, and the merits of Christ? On pretty good performance, plus God’s general leniency and his reasonable low standards? Or how about on having done as well as you could?

Then, not as a new appeal, but as the emphasis on all that he has said so far, Simeon asks his rude question:

Permit me, then, to address you as dying persons, and to ask what you will think of these things when standing o the brink and precipice of eternity? Now you can speculate, and dispute, and speak with confidence about the justness of your views. Now you can discuss these matters as if it were of little moment what your sentiments are, or what is the ground of your affiance. But if you hold fast any of the foregoing delusions, you will not find them so satisfactory in a dying hour as you now imagine. Doubts… will arise in your mind. …

Would you but place yourselves where you must al very shortly be, on a dying bed, we should not find it so difficult to convince you that it is better to trust in the righteousness of Christ, which is commensurate with all the demands of law and justice and adequate to the wants of the whole world, than to be trusting in any respect to any poor defective righteousness of your own.

If Simeon’s scriptural reasoning has not already been convincing, this blunt reminder of mortality will seem manipulative. But for listeners who know that things are as Simeon has argued, there is no better way to be talked to than as a dying person.