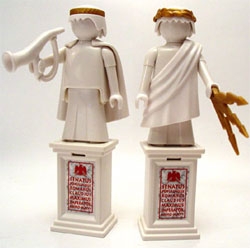 Left to my own lights, I would be a lifelong Lego nerd. But my kids have very clearly expressed a greater love of Playmobil. Hans Beck said in an interview that the toy line is popular (2.2 billion sold!) because it “does not impose specific play patterns on children, but rather stimulates their imagination.” Following Beck’s lead, Playmobil has avoided gimmicks like motors and noise-makers, sticking instead to a disciplined palette of basic forms. There’s not much to a Playmobil figure, but the company has generated an astonishing variety within those wisely self-imposed limits. They’re pretty hard to break, too. You have to be trying.

The German playmobil site has an obituary.