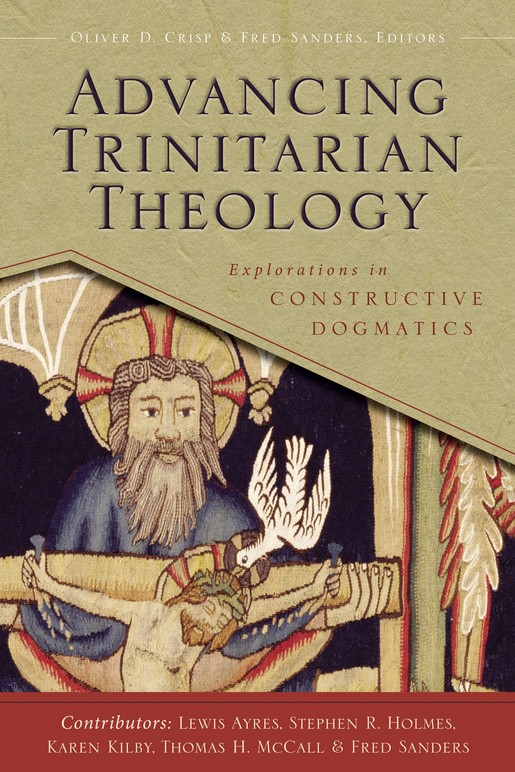 Zondervan has published select proceedings of the 2014 Los Angeles Theology Conference in a volume bearing the same title as the conference: Advancing Trinitarian Theology, edited by Oliver Crisp and Fred Sanders.

Slipping into advertising mode, I was going to say “Get the book, don’t wait for the movie!” But then I remembered that the movie’s actually been out for a long time: we made full video of all five plenary addresses available online not long after the January 2014 conference. So I suppose I should say “Don’t settle for the movie, get the book!”

The motif of this collection of essays is that progress in trinitarian theology is not always what it appears to be. For the better part of the past century, theologians have been declaring that a revolution has taken place, or ought to be taking place, in the doctrine of the Trinity. Western views were out, Eastern views were in –and another thing that was in was the very assumption that the East-West distinction was important. The unity of God was subordinated to a thick account of the three persons; contemplation of God’s being was subordinated to excitement about practical and political results; divine simplicity and the inseparability of trinitarian action were shouted down. In book after book, theologians assured readers that we were making progress of an especially revolutionary sort.

But in recent years, we’ve been hearing more and more objections to some of the conventional wisdom of the “Trinitarian Theology Project” (as we call it in the introduction). In various ways, a counter-revolutionary movement has begun to establish itself. Both the revolution and the counter-revolution are diffuse, so the conflict between them ( I wrote about some of the recent skirmishes here) is seldom a clean fight with clearly-aligned teams. So Advancing Trinitarian Theology is not a partisan book in that regard. But it is a sustained effort to point out the way forward for real progress in the task of articulating the classic doctrine of the Trinity, sometimes by trading recent orthodoxies for older ones, and sometimes by striking out along new lines not well developed by ancient or modern interlocutors.

Here is the table of contents:

6. “THE NAME ABOVE EVERY NAME”: THE ETERNAL
IDENTITY OF THE SECOND PERSON OF THE
TRINITY AND THE COVENANT OF GRACE . . . . . 114
R. Kendall Soulen

So Advancing Trinitarian Theology is neither a thesis-driven argument nor a loose collection of essays. It captures an important moment in the contemporary conversation on this central doctrine, and would work well as an introduction to contemporary trinitarianism.

This is volume 2 in the series called “Proceedings of the Los Angeles Theology Conference,” in which the volumes all bear the sub-title “Explorations in Constructive Dogmatics.” Here’s how the system works: We plan a big conference for January of every year, with five headliner speakers and nine other contributions selected from a call for papers. Before the year is over, the book of proceedings is published. At least that’s how it has worked twice in a row now, thanks to Katya Covrett and the team at Zondervan, and support from our host institutions, Biola and Fuller.

The upcoming conference is called Locating Atonement, featuring Michael Horton, Matthew Levering, Bruce McCormack, Ben Myers, and Eleonore Stump. It will be at Biola University on January 15 and 16, and registration is open now. In 2016 we’ll do the doctrine of Scripture (details and speakers to be announced at this year’s conference), and in 2017 we’ll turn our attention to the very idea of Dogmatics.