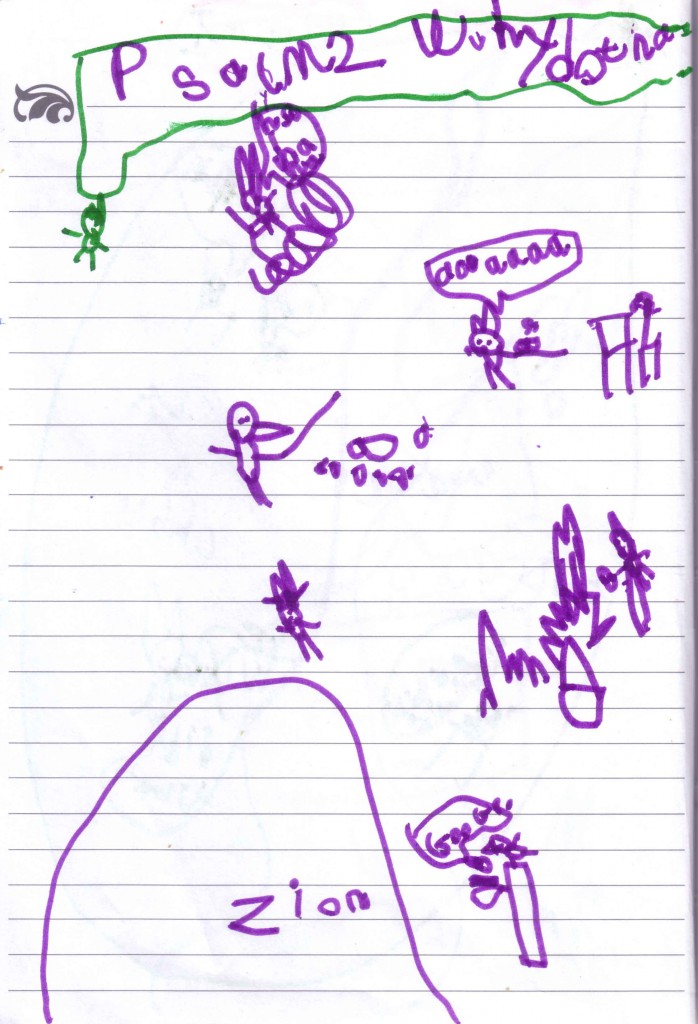 Phoebe Age Seven draws her way through the second Psalm. In her earlier psalmtoon work, she showed a strong commitment to unifying the entire page composition. In the second Psalm, for whatever reason, she has apparently abandoned the quest for a unified composition in favor of a looser assemblage of images. The page’s only unity comes from the fact that the individual drawings within it are of similar scale, and are the same tone of purple. The only deviation from purple is the small green cat at the head of the page, whose green word balloon serves as an umbrella banner stretching across the entire page. Written inside it: “Psalm 2: Why do the nations rage?”

Psalm 2 is a rich text for Psalmtooning, and Phoebe Age Seven stretches out to it with her young faith seeking visual understanding. 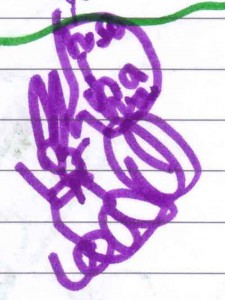 The first phrase she fixes on is “He who sits in the heavens laughs,” which she illustrates in an economical deployment of conventional cartoon forms: A billowing cloud represented by a purple scribble, surmounted by a stick-figure throne, occupied by a cat with large ears speaking the word balloon: “Ha ha ha.” 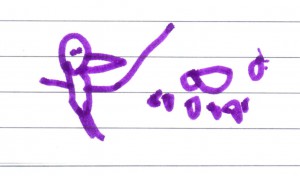 Next is the verse, “You shall break them with a rod of iron and dash them in pieces like a potter’s vessel.” Phoebe Age Seven represents this with a bird character waving a menacing rod over an intact coffee cup, surrounded by fragments of broken dishes. For all its use of the conventional visual language of cute animals, this is a terrifying image of judgment. Do not stare at it too long.

It should be noted that at this exploratory stage of her psalmtooning, Phoebe Age Seven has not settled on any particular animals to represent any particular figures in the Psalms. The Lord, the Psalmist, the enemies, and the other cast of Psalms characters, are portrayed with a flexibility that keeps us from regarding the images as stable or fixed forms. The messiah may be a bird here (a possible reference to the Birds-Head Haggadah?), but will likely be a cat or a bunny next time. 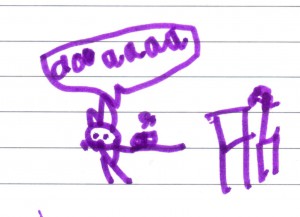 Next is a perplexing image: A cat holding a tray with a steaming bowl on it approaches a table and chair. The cat is saying “aaaaaa,” or perhaps “AAAAAAAAA.” What does this portray? Obviously, the verse “Serve the Lord with fear.” How would you draw serving, if not in the form of a waiter bringing soup? With fear: AAAAAAAA.

At the bottom of the page, too large for a detail view, is a hill labelled Zion, with a person hovering atop it: “I have set my King on Zion, my holy hill.” 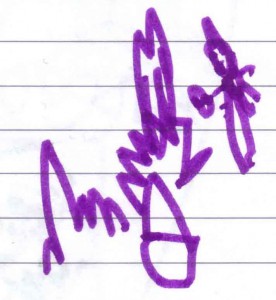 Another sub-image features a series of jagged lines gathered menacingly around a cat figure. These are highly stylized interpretations of enemies: “The kings of the earth set themselves,
and the rulers take counsel together,
against the Lord and against his Anointed.” Their jaggedness could also be a reference to the crowns of these kings of the earth. 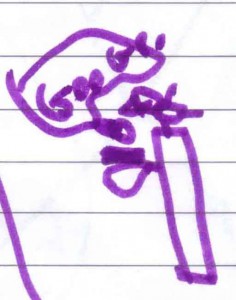 The last individual image is a bird perched in a minimalist tree, leaning solicitously over a nest, in which a barely-perceptible baby bird is saying “Goo goo.” Although “Today I have begotten you” may be echoing in the background of this image, it is intended as an illustration of the closing exhortation: “Kiss the Son.”

Phoebe Age Seven is not the only psalmtoonist to take up the second Psalm. Freddy Age Nine also turned in a commendable performance this time, in his characteristic orange pen.

What is this image? It seems like a stubby carrot, and an angry one at that. Perhaps a long turnip, in orange? But no, we can back out a little from this detail and see some context: 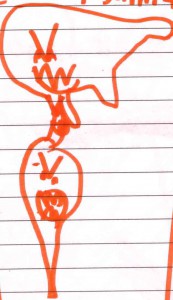 The odd shape above the carrot is… North America, which means the carrot is South America. And both Americas are angry, with the universal cartoon language of a v-shaped eyebrows and a mouthful of jagged teeth. What are they doing, these two hostile continents?

Well, obviously they are “furiously raging together,” prompting the question the Psalm begins with: “Why do the nations rage and the peoples plot in vain?” 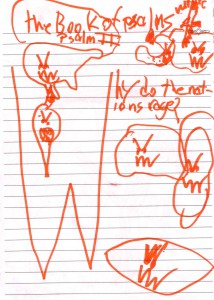 Answer me that, carrot South America and blobby North America! And while you’re at it, let’s hear a word of self-defense from the amorphous, not-to-scale Eurasia, and the football-shaped Antarctica.