(For the sermon that this is an excerpt from, go here.) 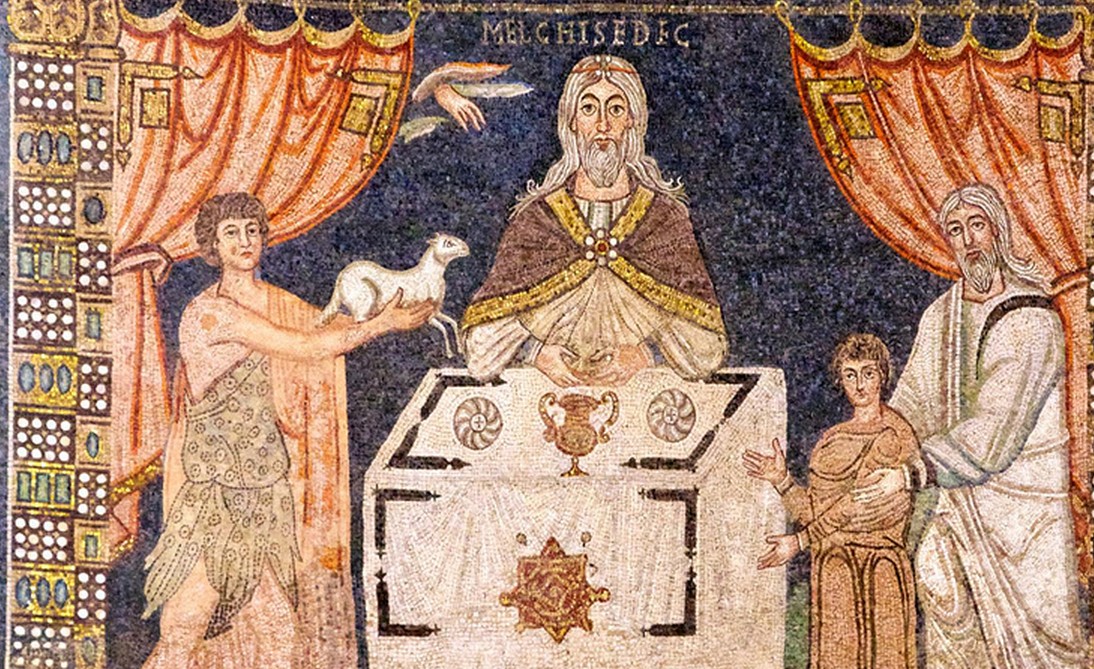 But Hebrews also provides training in how to hear when God drops hints. The author (or speaker, since Hebrews shows so many signs of being composed for oral delivery) seems to delight in bringing out minor scenes from the Old Testament and revealing how much was actually going on there. He presents them as if to say, “did you notice this? Did you hear what God was hinting at here?”

Here comes God’s hint. Pssst: Melchizedek, get it? Eh? See what he’s up to here?

Melchizedek skips across the surface of the Bible like a stone over a lake: Three short verses in Genesis. A thousand years later, one verse in a Psalm. A thousand years later, Hebrews. As W. H. Griffith-Thomas points out, “Melchizedek is mentioned three times in Scripture: in history (Gen 14); in prophecy (Ps 110); and in doctrine (as here), this last being based on the other two.”

Look at that first occurrence, in the history of Genesis 14:18:

18. And Melchizedek king of Salem brought out bread and wine. (He was priest of God Most High.) 19. And he blessed him and said,

“Blessed be Abram by God Most High,

Possessor of heaven and earth;

who has delivered your enemies into your hand!”

And Abram gave him a tenth of everything.

That’s it. You can do a comprehensive, exhaustive study of every mention of Melchizedek in the entire canon of Scripture by reading those three verses, one verse from the Psalms, and then Hebrews.

And he’s a priest.  In fact, this is the first use of “priest.” The first priest in the Bible is not a levitical priest, but a priest of the most high God way back in Genesis 14: Melchizedek.

In 7:4, Hebrews cries out, “See how great this man was!” Better than Abraham.  He blessed Abraham. The first priest, Melchizedek, basically takes God’s promise to Abraham and rephrases it as a blessing on him after his victory in battle.  And the blesser is above the blessed, so Melchizedek is better than, is above, Abraham. That’s a big deal in Bible terms: Matthew’s gospel traces Jesus’ lineage back to Abraham and calls Jesus the Son of Abraham, because that’s the very source and fountain of the covenant promise. But when you get alllll the way back to Abraham, there he is… Father Abraham has not yet had many sons… and standing there beside him is Mr. Melchizedek, full grown, no relation, got his own thing going on in another town, he’s the king and he’s a priest, and he blesses Abraham.

What did these two men do when they got together? They had church. Tithes were collected, a blessing was given, and bread and wine were eaten. That’s a church service! And then, apparently, Melchizedek must have packed up the portable pews and the offering plates and gone back to Salem to keep kinging and priesting it up with his people. Who was this guy? It doesn’t say.

This is why I think of Melchizedek, especially in these 3 verses from the history part of the Bible, as a kind of hint from God. We don’t get as much of his story as we’d like. I’d love to know the further adventures of Melchizedek. But let’s look at it this way: he’s the king of some people group at Salem way back in the days of Abraham. I don’t know the Salemites. Were they descendants of Ham or of Japheth who settled there?  Were they related to the Amorites, the Hittites, the Hivites, the Etcerites? We don’t know.

Here’s the hint part: God apparently had something going on with this people group, something we aren’t told much about. They’ve got a priest, one who leads them in worship not of idols or a false god, but of the most high God, the possessor of heaven and earth. That’s cool. Too often we read the story of the Bible and think, God’s got his chosen people, and the unchosen people are just collateral damage. God just cares about the messianic line, and everybody else is in the way. Does God care about Salemites? The hint from Melchizedek is that he does: they have some knowledge of him, they have a priest. The Bible’s not mainly about that, but there are hints.

In the Chronicles of Narnia, Aslan often shows up to explain things beautifully, and the people he’s talking to always change the subject and ask about somebody else in the story. Aslan’s reply is always something like : “I am telling you your story, not hers. I tell no one any story but his own.” I want to know about the Salemites. God’s not telling that story. Here’s where it gets tough:  more than 400 years later, the people of Israel are going to return to this land and God will command them to drive out and destroy the inhabitants. Why? Does God only care about the chosen people? No, he cares about all people, he’s the possessor of heaven and earth. Look over at Genesis 15:16, God tells Abraham his descendants will come back, but for now they have to leave the promised land. Why? “the iniquity of the Amorites is not yet complete.” Apparently God is keeping an eye on multiple timetables. The Salemites are doing okay, they’ve got a priest who gets it. The Amorites? They’re going to get worse and worse, and then in will come Israel like a broom to sweep them out.  Shall not the judge of all the earth do right?

All this and more is hinted at in Melchizedek.