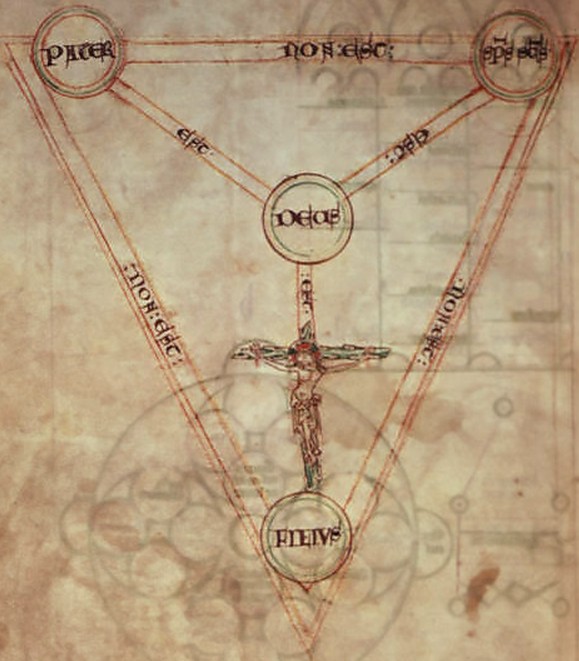 Theologian Brian Daley points out a curious feature of what happens when the doctrines of the Trinity and christology are (as they ought to be) put together. Each doctrine exerts a pressure on the other, so that anything you do in one area tends to have some corresponding effects in the other.

Daley says it much better than that, and with the necessary caution. It’s an observation he’s made several times, but I especially like the way he puts it in the essay “The Persons in God and the Person of Christ in Patristic Theology: An Argument for Parallel Development,” in the collection The Mystery of the Holy Trinity in the Fathers of the Church.

Gregory of Nazianzus observed something similar in the fourth century, as he sketched in his First Letter to Cledonius a “conceptual reciprocity” (Daley’s terms) between Trinitarian and christological language:

If we must speak concisely, the elements from which the Savior has come to be are one thing and another (allo men kai allo) –if indeed the visible and invisible are not the same thing, nor the timeless and the temporal– but not one subject and another (allos de kai allos) –no way! For both are one by combination, with God becoming human or a human being becoming God, or however one might express it. But I say “one thing and another,” the opposite of what is true in the Trinity. For there we speak of “one subject and another” (allos kai allos), lest we confuse the individuals (hypostaseis), but not of “one thing and another,” for the three are one and the same in divinity.

That is, the unity of the Trinity is interpersonal and essential (three whos, one what), while the unity of the incarnation is the joining of two natures in one person (one who, two whats). It only makes sense to put trinitarian and christological theology together; the fifth ecumenical council worked out some of the boundaries for that discussion, and I’ve written about its benefits (for evangelicals in particular) here.

But Daley’s observation about “conceptual reciprocity” goes a bit further:

The more ancient authors emphasize the complex personal unity of Christ as the agent of salvation, the more they are forced to acknowledge the irreducible threeness of God, even to the point of having to conceive of Father, Son and Holy Spirit as in some way ontologically ranked or subordinated, as sharing in the divine reality in differing degrees of fullness.

Conversely, the more ancient authors emphasize the radical unity of the divine Mystery, and see the threeness of Father, Son and Holy Spirit in what we might call perspectival rather than ontological terms, as a threeness of manifestation in history, corresponding to a threefold human experience of the Divine –the more, in other words, they express the Christian sense of God in a ‘modalists’ rather than a Trinitarian direction– the more they are forced to see Jesus, the Saviour, as subjectively double, and to understand his saving role in terms of God’s dwelling in a human being or acting in ways parallel to his human actions, rather than in terms of God’s personal identity with him.

There’s a lot in that, and Daley attempts to put more of a point on it:

To put it more concisely: one can see in the ancient debates, I believe, that a theology which emphasizes threeness of persons in God –even a theology that is to some degree ‘subordinationist’ in conceiving how those three can still be one– tends to stress the oneness of person in Christ the Savior, occasionally even to the point of seeming to compromise the fullness of his humanity.

On the other hand, a theology with a weak conception of the distinction of persons in God –a theology with a more ‘modalist’ way of conceiving God’s being– tends to stress the twoness of natures or substances in Christ, even to the point of tending to see him as a human person in whom the Word or Wisdom or Spirit of God has come to dwell, as a divine gift extrinsic to himself. (Daley, pp 12-13; paragraph breaks added for web reading)

Daley is mainly arguing a historical point in this essay: that there is “a much closer connection than historians of theology normally suspect” between these two topics.” So he spends the next twenty pages working through four examples of this tension in patristic theology (the late second century monarchian controversy, the third century deposition of Paul of Samosata, the fourth-century debate about Marcellus of Ancyra’s theology, and the fifth-century conflict over Nestorius). It’s a “somewhat sketchy survey” but it provides enough details to establish Daley’s admittedly tentative correlation.

It’s worth noting two reasons for this correlation between trinitarian and christological doctrines. The first reason is the one Daley actually traces: the doctrines grew up together, in the same times and places, as part of a single complex development. We may tease them apart to make them easier to teach or learn, but we shouldn’t expect to find the church fathers saying “Now, class, turn from the doctrine of the Trinity to the doctrine of christology.” They could recognize the conceptual differences (see the Nazianzus quotation above), but it was all part of one project. All the materials were always on the desk at the same time. “‘Trinitarian theology’ and ‘Christology’ are modern terms, not ancient ones, and represent tracts in the theological curriculum of the modern Western university rather than categories of Patristic discussion.” It may be legitimate for us to continue following our intellectual conventions of distinguishing them, but we should keep our wits about us and not retroject our categories; the sources don’t obey us.

And that brings up the second reason underlying Daley’s correlation. Not only in the history of the development of theology, but in reality, these two things go together. In fact, the doctrinal fields we are comfortable discussing as two distinct topics are actually zones within one more comprehensive field, a field that includes soteriology and is too vast to have a handy systematic-theological name. They are not actually “independent theological ideas, separate areas on the dogmatic map, or separate chapters in the catechism.”  What we’re really talking about is one thing:

the distinctively Christian understanding of h ow God is related to the world and to history; how God can be both transcendent Mystery –ultimate, infinite, free of creaturely limitations, uncircumscribed by human thought– and also ‘Emmanuel,’ God-with-us, God personally encountered in Jesus, God speaking today in the Scriptures and in the Church. The doctrine of the Trinity is really a narrative creed in miniature, a formulaic way of speaking about a God who is active in history, who reveals himself genuinely in the ‘economy’ of salvation witnessed to by the Bible, while remaining beyond history, beyond all human knowing. For Christian faith, Jesus reveals this God to us in his own person as Son, and draws us into this God’s inner life, in which his existence as Son is rooted. This is the ultimate reason we call Jesus Savior and Lord. (Daley, 32)

The “conceptual reciprocity” observation is helpful in several ways. As Daley identifies it in the historical evidence, it’s a useful angle on heresies. And in contemporary theology, it continues to be a useful, even if only tentative, tool: Next time you read a theology that is modalist about the Godhead, see if you don’t find that the corresponding christology turns out to be Nestorian (treating Christ’s two natures as two personal agents). In fact, there’s a traditional package that unites unitarianism in God with Nestorianism in Christ and Pelagianism in grace; I can introduce you to legalistic anti-trinitarians with a double-Jesus christology. And if you read someone whose idea of the incarnation is of some kind of mingling or mixing of God and man into one new substance, see if their view of the Trinity doesn’t verge on tritheism.

But keeping the discussion out of heresy territory, and within the bounds of orthodoxy, it’s very instructive to see how the threes and the twos line up in the emphases and tendencies in various theologians. Social trinitarians tend to prefer a christology that emphasizes the personal identity of the eternal-now-incarnate Son. Theologians who think the most important task in christology is to clearly distinguish divine and human natures, on the other hand, generally have a firm grasp on the unity of the Trinity and a harder time giving a thick description of the distinction among the persons. These correlations are not, as far as I can tell, logically binding; but they do describe the clustering patterns and tendencies of a lot of theologies I’ve observed.

Daley goes on to make a number of other fruitful suggestions (he has some surprising insights into ecclesiology at the end of the essay). But he concludes with the summary application: “Our theology and our Christology implicitly contain each other, and offer us together –but never separately– the intelligible framework for Christian meaning and Christian hope. Our God is the God of the economy revealed in the Church’s Scriptures; but this God, whom we have encountered and encounter still in Scripture and Church, is, we believe, God as he truly is.”