That’s the story according to Alexander Clogie (1614-1698), who retells it in his book Vox corvi, or, The voice of a raven that thrice spoke these words distinctly, Look into Colossians the 3d and 15th.. 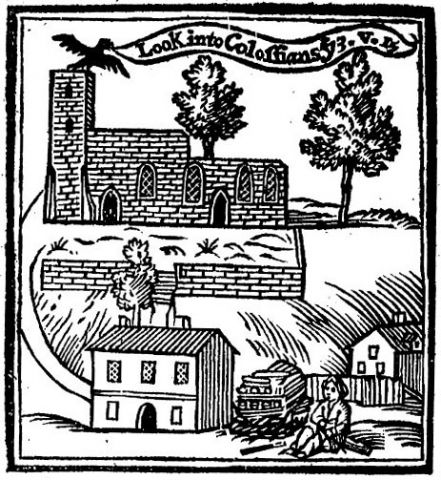 Clogie goes on with an even more extended sub-title, which lets the reader know that in his booklet, one will find “the text it self look’d into and opened in a sermon preached at Wigmore in the county of Hereford.”

On the 3d of February, 1691, about Three in the Afternoon, this Reverend Divine, a Person of the venerable Age of Eighty Years, and Forty of those a Laborious Teacher of God’s Word, in the Parish of Wigmore, in the County of Hereford, being int eh Hall of his own House, being with the Pious Matron, his Wife, some Neighbours and Relations, to gether with two small Grand-Children of his, in all to the number of Eight Persons; Thomas Kinnersley, one of the said Grand-Children, of but Ten Years of Age, starting up from the Fire-side, went out of the Hall-Door, and sate himself down upon a Block, by a Wood-pile before the Door, employing himself in no other Childish Exercise than cutting of a Stick; when in less than half a quarter of an Hour, he returned into the Hall in great Amazement, his Countenance pale, and affrighted, and said to his Grand father and Grand mother, Look in the Third of the Colossians, and the Fifteenth, with infinite Passion and Earnestnesse, repeating the Words no less than three times; which Deportment and Speech much surprizing the whole Company, they asked him what he meant by those words; who answered with great Ardency of Spirit, That a Raven had spoken them Three times from the Peak of the Steeple and that it look’d towards W. W.’s House, and shook its Head and Wings thitherward, directing its Looks and Motions still towards that House. All which words he heard the Raven distinctly utter three times, and then saw it mount and fly out of sight. His Grand father hereupon, taking the Bible, and turning to the said Text, found these words,