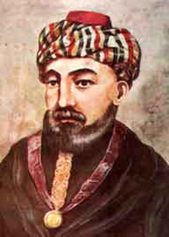 Today is the birthday of Moses Maimonides (born March 30, 1135, died 1204), the twelfth-century Sephardic Jewish intellectual who wrote The Guide for the Perplexed, which was a very influential book for international philosophical theology in the late middle ages and beyond.

In the history of Jewish thought, Maimonides is often referred to as the Rambam (an acrostic shortening of Rabbi Moshe ben Maimon), and is remembered for his explanation of the pentateuch called Mishneh Torah.

The Guide for the Perplexed is a long and ambitious book that explores a number of classic philosophical problems. Maimonides was especially interested in the relation of faith and reason. He starts the Guide by inquiring into the use of anthropomorphisms for God –does God really have hands, feet, eyes, etc., as he is said to have in the books of Moses? Maimonides is committed to a high view of God which puts him above all such ascriptions, and directs his readers to rely on a negative or apophatic understanding of God. That is, we cannot directly say what God is, but we can safely say what he is not: not limited, not physical, not mortal, not visible, and so on. Much of the Guide is made up of a leisurely application of this apophatic theology to the revelations of Scripture. Along the way, Maimonides explores the problem of evil, the powers of the intellect, the doctrine of creation ex nihilo, the structure of the universe (really!), and mystical encounter with God. And he tops it all off with an explanation of exactly what it was that Ezekiel saw in his vision by he river Chebar.

With all of this going on in his book, Maimonides poses for himself the question of whether most people can understand these deeper truths concealed in Scripture. The short answer is, no they cannot. This stuff would just perplex them more, and the point is to guide the perplexed. So he explains how texts like the Torah or even the Guide for the Perplexed can have a surface meaning and also an inner meaning for those who are able to reach further in. As a result of these musings, along with some hints that there are secrets hidden in the Guide, Maimonides has been read esoterically at various times. That’s what you get when you explain Ezekiel’s vision!

One summer when I was in seminary, I read through Thomas Aquinas’ Summa Theologiae for the first time, expecting to learn whatever I could from this quaint, sheltered, provincial, little medieval monk who wrote in the depths of the dark ages. I was pretty quickly disabused of all those inaccurate prejudices I started the reading project with: Aquinas’ staggering intellect knocked me around all summer. One of the many jolts I received was that Aquinas (1225–1274) developed many of his thought projects in running dialogue with some earlier thinkers I had never heard of at that time: Moses Maimonides (1135–1204) and Avicenna, (980–1037). That is, this Christian theologian’s work was shaped by a Jewish theologian and a Muslim theologian. Turns out I was the one who was sheltered and provincial, and that the middle ages (“dark ages,” as it turns out, only to me and to anybody who left themselves in the dark about this millennium) were populated by a cast of characters who were busily engaged in an international, interreligious discussion of philosophical theology covering the most important perennial questions of human thought.

Avicenna, Maimonides, and Aquinas were all part of the international Aristotle Revival Fan Club, and that commitment united their philosophical projects as much as anything else. The Arabs started it, and Maimonides (writing in Arabic) developed this Aristotelian treatment of the Bible further before the first Christians came on board. Most of the problems which really vexed Aquinas about reconciling Aristotle and the Bible had already been handled extensively by Maimonides. Aquinas solved them in his own way, but he had learned a lot from reading Maimonides’ own solutions.

The final words from the Guide for the Perplexed:

God is near to all who call Him, if they call Him in truth, and turn to Him. He is found by every one who seeks Him, if he always goes towards Him, and never goes astray. Amen.