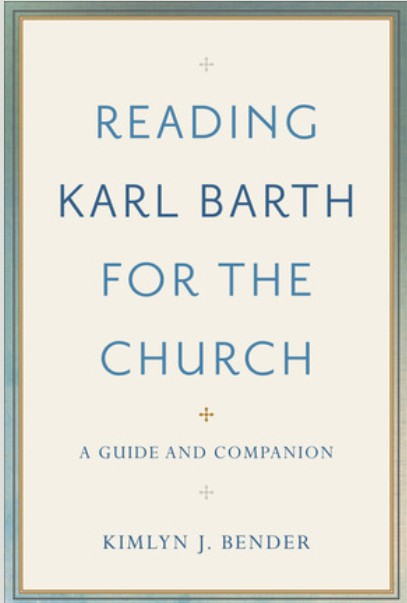 Kimlyn Bender has a fine new book out called Reading Karl Barth for the Church: A Guide and Companion. If you want to get the most out of reading Barth, but you don’t have a good teacher on hand or a class to sign up for, this book will equip you to pick up the Church Dogmatics for yourself and start reading from Volume I, part 1, page 1. It does stop at Volume I, but by then you’re well launched.

I wrote an endorsement for the book, in which I said that Bender’s interaction with Barth “provides a set of tools to keep new readers out of the ruts of some settled misinterpretations” and can help them “find detours around those places where Barth’s own idiosyncrasies distract from his main point.” I didn’t mean that last part as a backhanded compliment, exactly –as if Barth is somehow so incompetent a communicator that he stands in need of constant correction and careful handling, lest he spoil his own message. But I did want to acknowledge that Barth often writes with a rhetorical force that can overwhelm any reader, and (in my experience) can even exasperate those with delicate sensibilities. There are sections of the Dogmatics that feel like like standing under a waterfall. Bender doesn’t deflect any of the force of the cataract –to do so would be a betrayal– but he does a great job of slowing down the flow, so you can dip into it and understand what is happening.

My metaphor is labored, so I should just show you a glimpse of how Bender does it. On p. 110 of Reading Karl Barth for the Church, having made considerable progress in Barth’s early doctrine of the Trinity, Bender drops in a little excursus on “The Christocentric Basis of the Doctrine of the Trinity.” He quotes Barth’s statement:

[T]he doctrine of the Trinity, when considered historically in its origin and development, is not equally interested in the Father, the Son and the Holy Ghost. Here too the theme is primarily the second person of the Trinity, God the Son, the deity of Christ. (I/1, 315)

It’s a striking formulation, and raises a lot of questions. Surely here we must have an example of Barth’s imbalance in the direction of christocentrism. He says himself that the doctrine of the Trinity is “not equally interested” the three persons, but “primarily…Christ.” Having dropped in the (offending?) lines, Bender sets to work as guide and companion:

A number of things should be noted regarding this quotation.

First, Barth is, already here in the first volume of the CD, christological and indeed christocentric in his outlook and approach to dogmatics. The first and the third articles, those of the Father and the Spirit, are understood in light of the second, that of the Son. Those who may think that he became “christocentric” only with his revision of the doctrine of election in the second volume of the CD need to consider passages like this one. This is not in any way to downplay the remarkable achievement of his christological reorientation of the doctrine of election, nor to deny significant development in his theology. But his christological concentration is evident before that doctrine’s appearance.

Second, this christocentric outlook is a foundational conviction for Barth that he will consistently hold throughout his theological maturity, evident here in the first volume of the CD and unflinchingly held ever after. This statement that he made in the early 1930s will simply be restated in his lectures in Bonn in 1946 after the war. He never changes from this conviction that it is the second article of the creed (that dedicated to Christ) that illuminates the first (on the Father) and the third (on the Holy Spirit).

Third, all trinitarian reflection is on this account dependent for Barth upon a prior christological conviction. In other words, the doctrine of the Trinity begins with and is grounded in christological reflection. This is not to say that trinitarian reflection is of lesser importance. But the root of trinitarian reflection begins with a christological question—namely, the question of the unity, or one-ness, of Jesus Christ with the Father, and of the simultaneous inalienable distinction between them. This is the first and primary question that revelation presents to us as it is attested in the biblical witness. To say, as Barth does, that revelation is the root of the doctrine of the Trinity is simultaneously, and in the same way, to say that reflection upon Jesus Christ is the root of that doctrine (remembering that he can earlier equate revelation with Jesus Christ). The questions of the identity of the Father and of the Spirit thus follow upon that of the Son (see 315).

Following this order of moving from Christ to his Father and then to the Spirit is, Barth contends, not only the historical one of doctrinal development but also the one that the logic of Scripture attests (315).

Reading Karl Barth for the Church is full of that kind of helpful guidance. It’s a serious instrument for direct engagement with the text of Barth.