Consider today’s sketch, “how cats land on thier feet.” 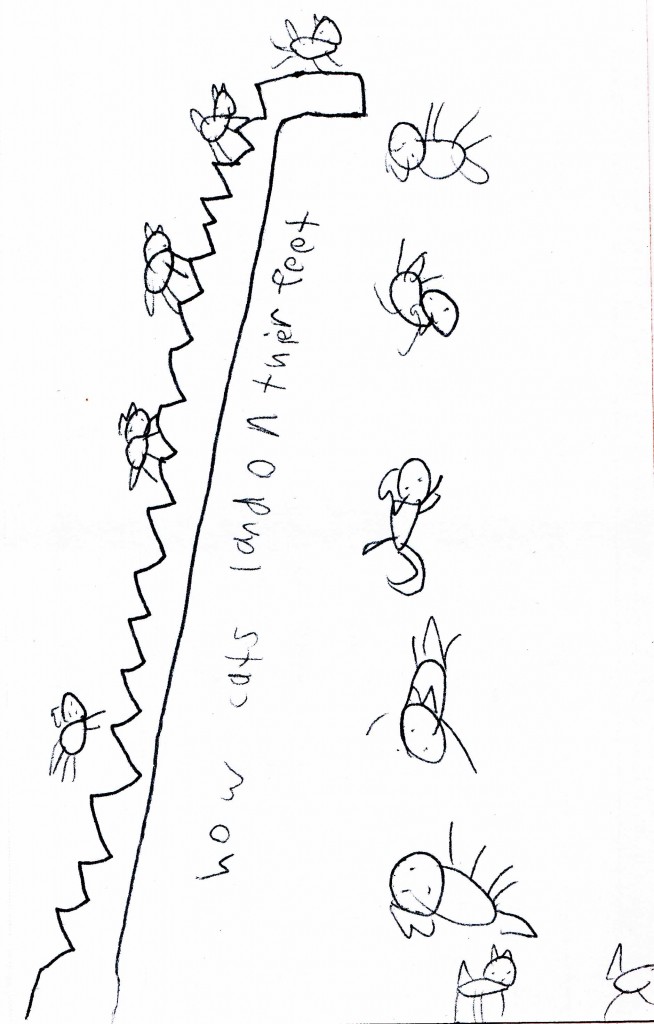 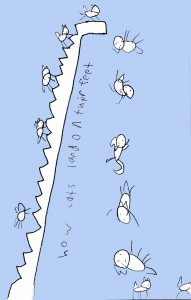 The central structuring element of the composition is the diving platform, which is a masterpiece of linework: A single line that enters from the bottom left, runs a riotous rickrack path toward the top center, then doubles back on itself by tracing a compact rectangle in midair before zipping back toward the bottom left of the page as a perfectly straight line.

That single line would be interesting just for its duality as both jagged and straight, but Phoebe Age Ten is not simply playing with lines. By bending it back to where it came from, and letting the two sides of the line run so near each other, she adds another dimension: a visually closed form, the diving platform itself. You can see the compactness of that form, and the remarkable, objective solidity it achieves, in this smaller, digitally enhanced view. I have turned the background light blue, which makes the diving platform fairly pop off the page. The viewer should bear in mind at all times that the platform is one single line!

Two other elements trace the same tilt as the platform. On the left, the series of four cats ascending the steps (I call  them Springy, Earnest, Quasimodo, and Mr. Friskers, but these appellations are only to facilitate critical discussion; the artist herself has not identified them) are necessarily tracing the same angle. But just to the right of the platform, and hugging it closely, are the half-dozen words that give the piece its title: “how cats land on thier feet.” We can assume the letters are all sans serif and lowercase in order to emphasize their function as a design element. They do not, one notices, hew perfectly to the line, nor run perfectly parallel, but draw gradually nearer to the line as they rise. This gives them the look of a dangling rope, a plumb line about to right itself. 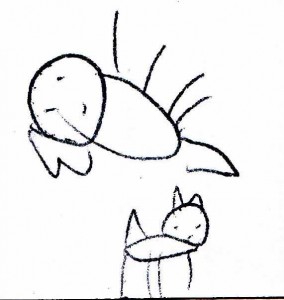 Which brings us to the descending cats, who do what the string of letters have visually hinted at, and fall straight down. There are five of them in flight, with a sixth and seventh on the ground and walking away.

It is tempting to look to the bottom cat for the information promised by the text: surely this is where we would see ‘how cats land on thier feet.” But that cannot be the right place: the last cat in flight is just as upside down as the first cat. Apparently nothing that happened above has helped his situation at all. And there is no transitional figure to get us from that utterly upside down cat (feet flailing uselessly in the air) to the cat who touches terra firma with four (okay, three) paws. The absolutely last cat, only half shown on the utter right edge, seems to acknowledge the anticlimax by simply walking away. 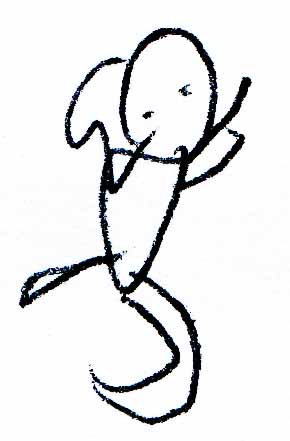 If the transition from air to ground is not the right place to look, where should we direct our eyes to find out “how cats land on thier feet?” I recommend the most transitional of all the transitional forms, the third airborne cat from the top.

When we come at last to this figure, words fail. The critic is nearly reduced to pointing, and asking breathlessly, “do you SEE it?” We could point out that it is the center of the composition, that the forces set in motion by the linear/solid platform all reach their climax at exactly this spot. We could ask the viewer to consider the two flying cats above and the two flying cats below, and note how they are all recognizably feline. We could ask the viewer to try to imagine encountering this central image out of context, unflanked by cats, and consider whether it could be confidently identified as a cat of any kind. We could break the image down into its constituent elements (eight lines and two dots, if I count correctly) and anatomize each of them.

And that is surely the point.