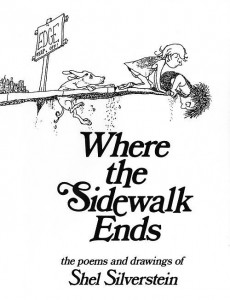 No one’s hangin’ stockin’s up,
No one’s bakin’ pie,
No one’s lookin’ up to see
A new star in the sky.
No one’s talkin’ brotherhood,
No one’s givin’ gifts,
And no one loves a Christmas tree
On March the twenty-fifth.

I mention it today just because it’s March 25, and because my 8-year-old is practicing her handwriting with this poem (all those nice commas an’ ‘postraphes!).

The litany of denials paired with Christmas references provokes a good laugh from the third-grade set, and the punch-line works well: March 25 is a comically long way from Christmas. It’s exactly, let’s see, seven, eight… nine months from December 25. Why, nine months is long enough to bring a baby to term. In fact, it’s the nine months from March 25 to December 25 that Jesus Christ grew from conception to birth.

So here’s a question: Did Silverstein write “Merry…” about annunciation day? March 25 is celebrated as the day when Christ was conceived by the Holy Spirit in the womb of the virgin,and Gabriel brought the good news to Mary. Mary, which sounds like Merry. Or is that really pushing it?

I’m just asking. It’s a beguiling little poem, and I’m never surprised to find stuff going on under the surface of an Uncle Shelby piece. On the other hand, Silverstein wasn’t exactly an artist imbued with the Christian mythos. He was sensitive to all kinds of human realities, and sometimes expressed a rough and playful spirituality. But Christian symbolism? Not so much (The Giving Tree is too polysemic to count as evidence here). I see that his birthday was September 25, so perhaps he keyed in on that. Or maybe he just picked a date that was comically far from Christmas.

Such commentary as I’ve seen on the poem suggests that it’s about keeping the Christmas spirit all year ’round.