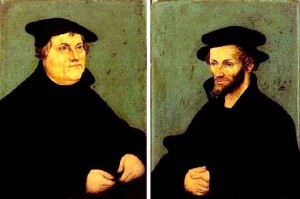 Today (August 1) in 1521 is the day Martin Luther wrote the advice, “Sin boldly. But believe even more boldly in Christ, and rejoice.” Protestants have been apologizing, and simultaneously not apologizing, for it ever since. To understand what it means, you have to be familiar with three things: Luther, Melanchthon, and justification by grace through faith.

It was the summer of 1521. Luther had grown a big beard and changed his name to Junker Jörg (that is, George the Knight). He was hiding out in one of Elector Frederick’s spare castles. He had been excommunicated by the Pope since January, and for the two months since the Diet of Worms, he had been under an imperial ban that made him an outlaw, wanted dead or alive. He made good use of the time, translating the New Testament straight from Greek to German –which was also against the law.

At the end of a letter to his friend Philip Melanchthon, Luther admonished Philip:

If you are a preacher of mercy, do not preach an imaginary but the true mercy. If the mercy is true, you must therefore bear the true, not an imaginary sin. God does not save those who are only imaginary sinners. Be a sinner, and let your sins be strong, but let your trust in Christ be stronger, and rejoice in Christ who is the victor over sin, death, and the world. We will commit sins while we are here, for this life is not a place where justice resides. We, however, says Peter (2. Peter 3:13) are looking forward to a new heaven and a new earth where justice will reign. It suffices that through God’s glory we have recognized the Lamb who takes away the sin of the world. No sin can separate us from Him, even if we were to kill or commit adultery thousands of times each day. Do you think such an exalted Lamb paid merely a small price with a meager sacrifice for our sins? Pray hard, for you are quite a sinner.

Pecca fortiter, sin boldly! It is a remarkable word, written by Junker Jörg holed up in the Wartburg, and sent to the pusillanimous Philip back in a Wittenburg that was being torn apart by radicals. Heiko Oberman called this statement his “most provocative words,” and Philip Schaff called it “the boldest and wildest utterance of Luther on justification.” There is a long and ignoble tradition, among Roman Catholic polemicists, of seizing on this word from Luther and urging it as evidence that the whole Reformation was just a pretext for a wild party. “See? Luther himself wanted people to be bold sinners! Why should we bother listening to this guy?” That kind of shadow-boxing is its own reward.

But even Luther’s charitable interpreters have their work cut out for them with this delphic utterance. G. C. Berkouwer asked, “Was Luther justified in speaking as he did? … It seems to us that Luther might have been more cautious. In an overheated theological atmosphere we should strive for intelligible formulations.” He goes on to quote a historian who warns that “It is rather a sentiment of the moment, and as such neither to be celebrated nor to be regretted but to be understood.” Berkouwer does his best to understand Luther at this point:

He does not say ‘Sin till you are blue in the face,’ or ‘Sin for all you’re worth,’ but ‘Sin bravely.'” With this word –whatever the libertine may do with it– he intends to exorcise the terror of the believer who has discovered some sin in himself and has now lost sight of the grace of God. An abundance of grace can subdue the power of sin… In order to signalize the superabundance of grace, he contrasts it –Luther is a vehement man– with a thousand sinful enormities a day. His intention is not to yield quarter to Antinomianism but to upset a construction which would make sin and grace of equal weight, and therefore he exhorts the sinner to have courage.

That’s good: “to upset a construction which would make sin and grace of equal weight.” Melanchthon was indecisive, and highly prone to attacks of conscience and scrupulosity. Whatever Luther said to him about grace, Melanchthon was likely to weigh it in the scales against the common-sense necessity to do good work and to maintain a clear conscience. Luther, always an instinctively contextual theologian, knew that he couldn’t let Melanchthon do that, especially at a time when he was under so much pressure. Melanchthon was in danger of collapsing the gospel back into the law, and letting his conscience become an idol standing in the place where God’s promises should stand. To Melanchthon he said, “sin boldly.” But later, when combating real antinomianism, Luther preached nothing but the moral demands of the law:

Our view has hitherto been and ought to be this salutary one– if you see the afflicted and contrite, preach Christ, preach grace as much as you can. But not to the secure, the slothful, the harlots, adulterers, and blasphemers.

Twentieth-century Lutheran theologian Dietrich Bonhoeffer decided that he had to deal with the “sin boldly” motto right up front in his book Discipleship (previously known as The Cost of Discipleship). After his classic opening blast against cheap grace, he argues that some propositions are true as conclusions but would be false as presuppositions: “Grace as presupposition is grace at its cheapest; grace as a conclusion is costly grace. It is appalling to see what is at stake in the way in which a gospel truth is expressed and used.”

What does it mean for Luther to say: ‘Pecca Fortiter, sed fortius fide et gaude in Christ” –‘Sin boldly, but believe and rejoice in Christ even more boldly!’ So you are only a sinner and can never get out of sin; whether you are a monk or a secular person, whether you want to be pious or evil, you will not flee the bonds of the world, you will sin. So, then, sin boldly, and on the basis of grace already given! Is this blatant proclamation of cheap grace carte blanche for sin, and rejection of discipleship? Is it a blasphemous invitation to sin deliberately while relying on grace? Is there a more diabolical abuse of grace than sinning while relying on the gift of God’s grace? Isn’t the Catholic catechism right in recognizing this as sin against the Holy Spirit?

To understand this, everything depends on how the difference between result and presupposition is applied. If Luther’s statement is used as a presupposition for a theology of grace, then it proclaims cheap grace. But Luther’s statement is to be understood correctly not as a beginning, but exclusively as an end, a conclusion, a last stone, as the very last word. …’Sin boldly’ –that could be for Luther only the very last bit of pastoral advice, of consolation for those who along the path of discipleship have come to know that they cannot become sin-free, who out of fear of sin despair of God’s grace. For them, ‘sin boldly’ is not something like a fundamental affirmation of their disobedient lives. Rather, it is the gospel of God’s grace, in the presence of which we are sinners always and at every place. This gospel seeks us and justifies us exactly as sinners. Admit your sin boldly; do not try to flee from it, but ‘believe much more boldly.'”

Bonhoeffer’s exposition is perfect, but note the change he has slyly introduced: “Admit your sin boldly.” Pecca fortiter is not a plan of action; it’s a script for a prayer of confession. When confessing sins to God, don’t excuse your sins, minimize them, or treat them as fictitious. Things like that don’t need forgiveness, or at least not very much. Instead, identify your sins and state them boldly. Face the fact that you are not sin-free, and that, in yourself, you never will be. Keeping a perfect conscience is just not a realistic part of the Christian plan. Learning how to get daily forgiveness from God: That’s the plan.

Philip Schaff, who called pecca fortiter Luther’s boldest statement, also said that it couldn’t be used as an argument against his doctrine of justification. “It loses all its force as an argument against him and his doctrine, first by being addressed to Melanchthon, who was not likely to abuse it, and secondly by implying an impossibility; for the fortius crede [believe boldly] and the concluding ora fortiter [pray boldly] neutralize the fortiter pecca [sin boldly].” And then Schaff makes a truly insightful observation: “Paul, of course, could never have written such a passage. He puts the antinomian inference: “Let us continue in sin that grace may abound” into the form of a question, and answers it by an indignant me genoito (Rom. 6:1). This is the difference between the wisdom of an apostle and the zeal of a reformer.”

The only thing I would add to this, as neither a wise apostle nor a zealous reformer, is that I am learning something very valuable from Luther as my young children get a little older (the oldest is approaching double digits). It is very tempting for me to think that I have completed my job as a Christian father when I have taught my kids how to be good. I think it is literally a temptation: It would be a parental sin, a sin of the foolish variety, to launch my children into adulthood armed with nothing but the advice not to sin. What they really need is the knowledge of how to deal with sin and guilt as they all-too-predictably acquire it. I don’t want them to be blindsided by the fact that they are sinners, or uninformed about what to do with consciences that rightly condemn them. They need to learn the Christian skill of taking it to God, of walking in the light, of believing Christ boldly, rejoicing, and praying boldly.

======
A coincidental aside: It was also on this day, August 1, but seventeen years later, that Luther cheered up poor old Philip again by chalking these words on his table: