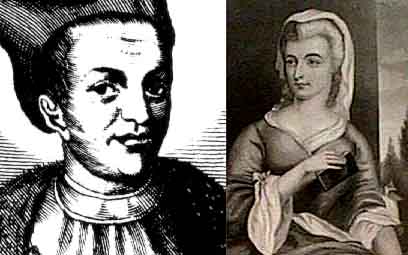 Imagine what it must have been like to be the mother of John and Charles Wesley. Susanna Wesley (1669-1742) managed the task somehow, but I’m not sure how. Charles was such a busy fellow that, having decided to be a hymn-writer, he produced over 5,000 hymns. And as for John, he was driven for years to find the most rigorous and all-encompassing standards of holiness available in the eighteenth century. These two Oxford-bound high achievers were only the standouts in the gigantic home-schooled family of ten children. Nine additional children died in infancy, for a total of nineteen live births, necessitating a mental picture of Susanna Wesley that ought to portray her as perennially pregnant for most of two decades.

The mother of this clan couldn’t afford to put up with much nonsense, and as a young man, John Wesley generated his share of good-hearted nonsense. When John discovered Thomas a Kempis’ influential classic The Imitation of Christ, he got a bit carried away with the Don’t-Enjoy-Things and Especially-Don’t-Talk-To-Women spirituality that breaks through that rigorous monkish tome. Susanna Wesley deftly dispatches the rigorism of Thomas a Kempis’ teaching on mortification with a few lines in a letter:

I take Kempis to have been an honest, weak man, that had more zeal than knowledge, by his condemning all mirth or pleasure as sinful or useless, in opposition to so many direct and plain texts of Scripture. Would you judge of the lawfulness or unlawfulness of pleasures? of the innocence or malignity of actions? take this rule –whatever weakens your reason, impairs the tenderness of your conscience, obscures your sense of God, or takes off the relish of spiritual things; in short, whatever increases the strength and authority of your body over your mind, that thing is sin to you, however innocent it may be in itself.

Susanna may have been writing to take the edge off of an extreme presentation of mortification, but she certainly isn’t handing her son over to loose or low standards. Her standard for deciding when a pleasure crosses the line into sin remains as realistic and rigorous as anyone could want.

Quoted by J. C. Ryle in his Christian Leaders of the Last Century (published in 1873)