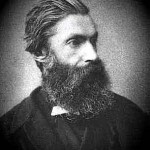 I know it disagrees with conventional wisdom, but I am persuaded that evangelical Christianity has always had a recognizable way of approaching the Bible, and that this approach has been tacitly trinitarian. To demonstrate this, I could cite a number of contemporary theologians who are proudly developing their accounts of Scripture in an increasingly trinitarian way. But I want to avoid giving the impression that a trinitarian theology of Scripture is a new thing that evangelicals have been waiting until the twenty-first century to discover or achieve. What I’d like to show instead is that this is something that’s been at work in the evangelical bloodstream for centuries.

To make this case, I will call on three witnesses from evangelical history. In this post, I will cite a popular Bible expositor from the 19th century, Adolph Saphir. In a later post, I will gather evidence from The Fundamentals by reading the longest of the ninety chapters, entitled “Life in the Word,” by Philip Mauro. And finally, I’ve discovered a source in which we can catch evangelicals singing their doctrine of Scripture: a hymnal compiled in 1911 by the celebrated preacher G. Campbell Morgan, which contains fifty hymns on Scripture, for use in Bible schools. Saphir, Mauro and Morgan testify to a tacitly trinitarian approach to Scripture which undergirds the high doctrine of Scripture characteristic off evangelicalism. I have tried to pick representative evangelicals, though I admit to finding representatives in whose work the trinitarianism emerges to become more explicit than tacit. I also chose evangelicals from one hundred years ago because, while they had their own problems, they did not have our problems. They have an approach to Scripture which had not yet been tested by the onslaught of late modernism or muddled with existentialist anglophone neo-orthodoxy and the evangelical reaction against it.

My first witness is Adolph Saphir (1831-1891). He is now mostly forgotten, so his name does not carry much weight or authority. But his words are the weightiest of all my witnesses. Saphir was a highly-regarded nineteenth-century preacher and Bible expositor. His entire family converted from Judaism to Christianity when the Scottish Free Church sent missionaries to Hungary in 1843. Saphir studied in Berlin, Glasgow, Aberdeen, and Edinburgh. He entered the ministry in 1854, and after time as a missionary to Jews in Hamburg, he was pastor of churches in Glasgow and in London from 1861-1888. From these parishes he carried out an influential writing ministry. Andrew Murray’s book are filled with extended quotations from Saphir, and R. A. Torrey described his best book, The Hidden Life, as “one of the most helpful books in English literature on the subject of prayer and the deeper Christian life.” He was a major influence on David Baron, and W. A. Criswell considered Saphir the best expositor of Scripture, period, on the basis of his Hebrews commentary. So much for the credentials of this unjustly forgotten saint; here are his words.

Saphir’s approach to Scripture could be drawn from any of his writings, but I will focus on his masterful book The Hidden Life: Thoughts on Communion with God. It is a book-length meditation on James 4:7, “Draw near to God and he will draw near to you.” Saphir writes to entice Christians to a direct encounter with God through Scripture. He teaches —and rejoices in— sound doctrine, but he constantly warns his readers not to confuse sound doctrine with the experienced reality of God drawing near. He says, “the most subtle idolatry and image-worship is when the soul rests in doctrine, however true. When delighted with the profound and comprehensive scheme of Scripture truth, it forgets that this is but the abstraction, the theory, the shadow of great and living realities.” To the contrary, Saphir says, “Draw nigh to God, and He will draw nigh to you —He Himself, although He may use various channels and instruments; it may be Paul, or Cephas, or Apollos; it may be affliction or prosperity; it may be through the voice of Nature or of Providence; it may be through the word or the example of a Christian; yet it is God Himself.”

You may be disconcerted by this list of instruments used by God for drawing nigh. Fear not. Saphir has no intention of using “direct encounter with God” to level all instruments to the same plane, demoting Scripture to the same status as nature or providence. He goes on: “But of all instruments and channels the written Word is of the utmost importance; it stands supreme. It is through Scripture, eminently, that God draws nigh to the soul. But let us never mistake the reading of the Scripture for that real drawing nigh of the living God, towards which it is the great help, and of which it is the great witness. Scripture is not the substitute for God’s drawing nigh to us, it is only the channel; the written Word of the past must become the living Word of the present.” What is the relation between “the written word of the past” and “the living word of the present?” It is a dangerous dichotomy, but Saphir’s whole point is not to dichotomize and separate, but to distinguish in order to unite. “God speaks in and through the Word. It is not that God spake long ago, and that the record of His acts and words, His revelation was embodied in a perfect manner, and preserved for us in Scripture. This is true. But God gave us the Bible, not to be silent now and let the Bible speak instead of Him, and be a guarantee for Him, but that He Himself may through His word speak, comfort, and confirm the soul, filling it with His light and love.”

To bring home his point about the direct communication that God speaks in Scripture, Saphir uses the metaphor of translation:

God draws nigh in the Word. Do we know what it is to read the Bible in the original? It does not mean in Hebrew or Greek. God speaks neither Hebrew nor Greek. This is the original language of Scripture —the love of God to the soul: “I have loved thee with an everlasting love: therefore with loving-kindness have I drawn thee.” And all God’s vocabulary is summed up in Jesus —Alpha and Omega, He is the Word. When God takes the written Word back from the paper into His own mouth, then we read the original; then it is again God- breathed, and the word which cometh out of His mouth shall not return void.

The doctrinal content of Scripture is real and unaltered, but Saphir highlights its effect in reaching its hearers and bringing them into an encounter with God Himself. As in its origin, Scripture is in its effect trinitarian: “And thus it becomes to us an engrafted, implanted Word, inseparably connected with the Father, with the living Savior, and with the indwelling Spirit. God reveals Himself continually to us in the Word —God in Christ and by the Holy Ghost.”

In the nineteenth century, evangelicals with a high view of Scripture were increasingly criticized as being book-worshipers, or Bibliolaters. Saphir knew better than to take this charge seriously on the lips of liberal theologians:

The charge of Bibliolatry (worship of the Bible) has been of late frequently preferred against those who maintain the supremacy of Scripture. As far as this objection is urged by those who do not fully and clearly acknowledge the Divine authority and inspiration of Scripture, it is easily refuted. But as far as we ourselves are concerned, we may do well to consider whether our opponents are not giving utterance to a truth which they themselves do not fully see, and warn us against a danger the existence of which we are apt to overlook. In other words, never mend whence and for what purpose the charge of Bibliolatry is made, —consider the thing itself; is there such a tendency, such an evil, such a danger? I know that many Christians will reply at once, “We cannot value, and reverence, and cherish the Bible sufficiently.” And this is quite true. The danger is not of a reverence too deep, but of a reverence untrue and unreal.” Saphir then puts forth a rule for esteeming Scripture rightly, and it is a rule that appeals to the tacit trinitarianism of hearing God’s voice in Scripture: “We cannot speak, think, and feel too highly of Scripture in its vital connection with Christ and the Spirit; but there may be a way of viewing Scripture by itself apart from Christ and the Holy Ghost, and transferring to this dead book our faith, reverence, and affection; and this surely would come under the category of idolatry, – substituting something, however good and great in itself, or rather in its relation to God, in the place of the living God.

Again, Saphir draws out his Christological and pneumatological presuppositions: “On such an important subject it is a duty to be explicit, although one is liable to be misunderstood. (124-125) … By Bibliolatry I understand the tendency of separating, in the first place, the Book from the Person of Jesus Christ, and in the second, from the Holy Ghost, and of thus substituting the Book for Him who alone is the light and guide of the Church.(128)”

Saphir warns that it is entirely possible to devolve from being pious to being “God-estranged text-worshippers,” and as an illustration of this result of Bibliolatry he cites a Rabbinic saying from his own Jewish background: “now that God has given the Law, He has no more need and right to interfere by further revelations.” Saphir warns that “under the pretence of honouring the Bible, they virtually treated God as one who had ceased to live and rule among them.” He identifies the inevitable result of this declension as the accelerated hardening of religion into dead rationalism:

And now the rule of man began. For if instead of God we have the Bible, the task of commentators, interpreters, casuists, commences. For the text is obscure, the commentary distinct; the text is severe, the casuist accommodating; the text is deep and many-sided, the interpreter shallow and one-sided; the text desires inward truth and radical cure, the tradition heals the hurt of the daughter of my people superficially and falsely. In course of time the tradition came to be regarded as more valuable, more necessary, more practical, than the Bible. Naturally so. Without a living God, viewing the Bible as God’s substitute, a clear and detailed interpretation of the code is in reality of greater importance than the code itself. (128)

For Saphir, it was all or nothing: either Scripture is the word of God in the full and direct meaning of that packed theological phrase, or it plummets to the level of supporting a book religion with commentators and legal argumentation as the functional authority. Christianity, on the other hand, is communion with God. And the only way to draw near to God is in the confidence that God draws near to us in the inspired word of Scripture, where we truly meet him.