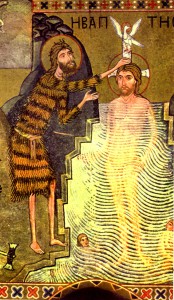 Pictures of the baptism of Christ are visually busy, filled with characters and details. Since it’s a baptism, it makes sense to start with a close look at John the Baptist. John is an important New Testament character, and Christian artists have assigned him his own iconographic details. You can read all about it, and see examples, in Saint Jean Baptiste dans L’art (Arthaud, 1957), by Alexandre Masseron, especially chapter seven, on the baptism of Christ. There are also entire cycles of illustration devoted to his career, shown by Gaston Duchet-Suchaux and Michel Pastoreau in their The Bible and the Saints [Flammarion Iconographic Guides] (Paris: Flammarion, 1994, p. 196). John is often pictured by himself in the wilderness.

In scenes of the baptism of Christ, John appears wearing his hairy garment (at first merely a classical toga or philosopher’s garment, but in later pictures a positively shaggy robe, like that worn by the decidedly ascetic John in the Capella Palatino in Palermo), and carrying a staff in his left hand. 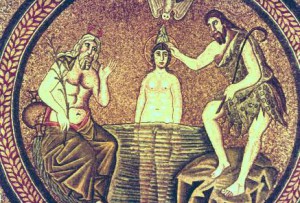 In the two baptisteries in Ravenna, there is already a difference observable in this staff: John in the Arian baptistery holds a simple hooked staff about the size of a cane. In the Baptistery of the Orthodox, however, he holds a tall and rather imposing jewelled cross. It was the cross that was to become his standard emblem, although usually it is much more slender than the one in this image. Thus it is John’s symbolic staff which guarantees that the baptism of Jesus frequently features a visual reference to the crucifixion.

However, in the middle Byzantine image, John’s cross-staff is usually not present (although it continues to be part of his personal iconography when he is pictured by himself, as the angelically-winged Forerunner). He is described by Vladimir Lossky in a work he coauthored with Leonid Ouspensky: The Meaning of Icons (New York: St. Vladimir’s Seminary Press, 1989, pp. 106-107). Occasionally the cross will be present in the picture as a kind of architectural monument, a column standing in the middle of the Jordan (see most notably the mosaic at Hosios Lukas). Gertrud Schiller explains that this cross-on-a-pillar is a reference to an actual landmark installed at the spot in the Jordan where Christ’s baptism was said to have occurred (Schiller, p. 142 and Robin Jensen’s “What are Pagan River Gods Doing in Scenes of Jesus’ Baptism?” Bible Review IX:1 (February 1993), p. 54 n.4). The primary written evidence is Bede’s eighth-century report in De Locis Sanctis 12. Bede also describes a square church set up right in the midst of the stream. Ouspensky informs us that when John is not holding the cross in his left hand, he may sometimes be represented holding a scroll to symbolize his prophecy, or simply gesturing toward Christ (Ouspensky and Lossky, Meaning of Icons, p. 164).

John has other standard iconographic attributes which sometimes accompany his appearance in scenes of the baptism. In evocation of his message of judgment and repentance, and specifically of the prophecy, “The axe is laid to the root of the tree,” there is often a long-handled, double-bladed axe near him, as well as a truncated tree. This detail can transform all the trees in the composition into possible vehicles of symbolic content: Why are some cut and some in full bloom? The single tree in the Hosios Lukas mosaic seems to have been cut back to a stump, from which new shoots have emerged; is it too much to say that this is repentance made visible in landscape? 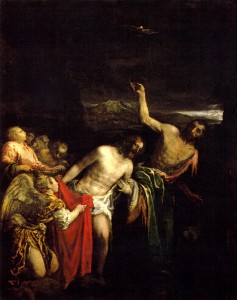 Another saying of John’s, “Behold the Lamb of God,” has caused artists to represent him with a lamb nearby, to which he may point. This lamb may be full-sized and at his feet (as in Grünewald’s famous Isenheim Altarpiece, not pictured) or extremely small and perched on the book in his hand. The Flamarion Guide reproduces a tiny black-and-white example of this on page 195. The lamb, however, is seldom pictured in scenes of the baptism of Christ. Most artists seem to have understood intuitively that the Lamb to whom John referred was there receiving the baptism, and that adding a literal lamb would have been superfluous and distracting. This is a confirmation of the logic contained in the famous 82nd Canon of the Quinisext Council of 692, which argued, specifically with reference to the depiction of symbolic lambs associated with John the Baptist, that “in order to expose to the sight of all, at least with the help of painting, that which is perfect, we decree that henceforth Christ our God be represented in his human form and not in the ancient form of the lamb.” (Leonid Ouspensky, Theology of the Icon. New York: St. Vladimir’s Seminary Press, 1978, Vol. 1, p. 92). 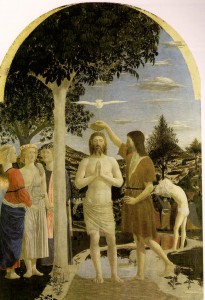 What John does with his right hand can vary widely, apparently in keeping with the baptismal practices of the age in which he is represented. In the classic Eastern image, John is always only laying his hand on Christ’s head as if to confer an office or blessing. Since Christ is generally at least up to his waist in the water in these images, it is clear that he is being baptized by immersion and thus needs no water poured on his head. Constantine Cavarnos makes much of this, maintaining that the importance of several iconographic elements in these icons is that they teach the Orthodox way of baptism by full immersion (Guide to Byzantine Iconography (Boston: Holy Transfiguration Monastery, 1993, vol. 1, pp. 152-153). Later artists throughout Europe will put a bowl or even a shell in John’s hand, from which he pours water, thus baptizing Christ by infusion. Somewhere between the clear immersion of the Hosios Lukas mosaic and the obvious infusion of Piero Della Francesca’s painting are a number of mixed types. 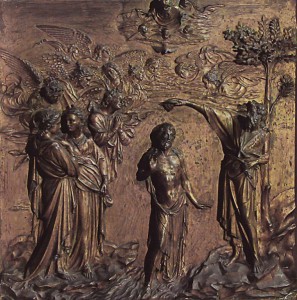 To further complicate this difficult question, a third liturgical act (distinct from either the laying on of hands or baptism by infusion) is sometimes incorporated into this scene: anointing with oil. Nicholas of Verdun’s altar at Klosterneuberg [figure 8] has it all: Jesus, waist-deep in water, bends his head to receive a blessing from John’s right hand and the poured-out contents of a bottle in John’s left hand. The bottle probably contains oil for chrismation, especially since the dove of the Holy Spirit is breaking through the clouds and extending a claw to touch the bottle, thus actively sharing in the selfsame motion of anointing. Schiller, in fact, says “the bottle always signifies oil for anointing” (Schiller, Iconography, p. 139). The liturgical significance of so dense a gesture is probably a matter for experts in the history of the sacraments to sort out. 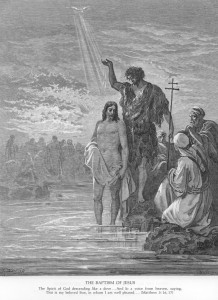 John is usually pictured as stooped over somewhat, bending gracefully at the waist in order to reach over to Jesus and lay hands on him. This posture varies according to the overall composition of the scene: in the Tres Riches Heures of the Duke of Berry, John is kneeling; in a mosaic at St. Mary Pammakaristos in Istanbul, he is bent over at a dramatically acute angle; El Greco has John standing quite upright.

The Baptist may be looking in either of two directions: either directly at Christ, or at the dove of the Holy Spirit. In either case, the direction of his gaze tends to provide a powerful focal tension in the image. Almost inevitably there is a powerful triangular tension at the center of these compositions, created by the juxtaposition of the dove, the head of John, and the head of Christ. The artist can, however, dismantle this structure by placing the dove extremely high in the composition (as in Gustave Doré’s theatrical setting, or making it considerably smaller than the heads of the two men (especially in many Russian icons), or by interposing the arm of the Baptist in a way that breaks up the intervening space (L. Ghiberti’s Baptistery in Siena. In other cases, the artist may seem to contrive other elements in the painting to echo and emphasize this structure (Piero Della Francesco has the two men’s heads exactly level with each other, and the Baptist’s arm cuts a strong diagonal between himself and the dove). 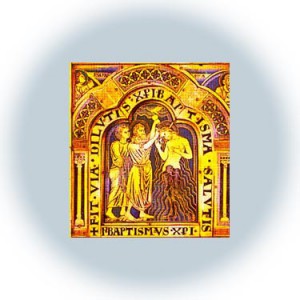 John sometimes stands on a rock which is distinct from the rest of the river bank. We have already seen that in the earliest images (from the walls of the catacombs), the piece of ground on which John stands is the only indication of landscape present. Likewise in both of the Ravenna baptistery mosaics, little mounds of river-bank seem to be nothing more than a bit of stage for the figures to stand on. According to Schiller, medieval legends and pilgrims’ tales identified the site of the baptism with the spot from which Elijah was taken up into heaven (Schiller, p. 132). It may lend credence to Schiller’s theory that the Hosios Loukas baptism, which features the cross-on-a-column so prominently, also emphasizes the ground under John as a distinct rock. Hosios Loukas, then, shows two signs that may be traced to pilgrims’ reports of the Jordan site itself. It is appropriate that John, whose ministry discharges the office of Elijah (Matthew 17:10-13), stands on this rock. It was Elisha, not Elijah, who caused a lost axe-head to emerge from the Jordan (II Kings 6:4-6). Otherwise, this would be another tantalizing parallel, linking John/Elijah, the Jordan, and the “axe laid to the root of the trees.”