In this leisurely exploration of the image of the baptism of Christ, we finally turn to a description of the three persons of the Trinity. They are linked in the center of the image by the vertical beam of light, running down from the Father through the Spirit to the Son. 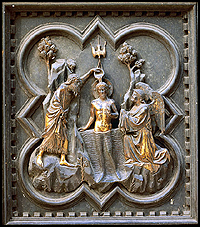 The question of representing God the Father in an icon raises the entire problem of the justification of religious icons in an especially acute manner. The classic justification for icons, as articulated especially by John of Damascus and the Seventh Ecumenical Council, hinges on the incarnation: Those theologians argued that God can be represented visually because God became human. “God,” of course, means in this case “God the Son,” the second person of the Trinity. The first person of the Trinity did not become flesh, and according to the classic incarnational rationale for icons cannot be depicted visually.

An aside: The issue of how to represent God the Father is more difficult than we can go into here. The Father, according to Greek patristic testimony, is invisible; but the Son is the perfect Image of the Father. Ouspensky’s Theology of the Icon (especially chapter 9) gives much more detail about developments in the Orthodox church. Francois Boespflug’s Dieu Dans L’art (Postface by Leonid Ouspensky; Paris: Editions du Cerf, 1984) provides a reasonable account of the same issues in Roman Catholicism (including a translation of some eye-opening papal documents from the eighteenth century). Thus the problem for the iconographer who wishes to remain within canonical guidelines in the serious matter of making an icon of the Trinity is, how can the presence of God the Father be depicted without actually depicting God the Father?

One alternative is to refuse any indication of the Father’s presence whatsoever. The earliest images, as we have seen, took this approach. Christ and the dove are pictured, but no indication of the Father is given at all. From the catacombs to the Ravenna baptisteries, and on to more restrained artists east and west [see the Florence baptistery door, this was apparently an adequate account of the baptism of Christ; the Father just went without saying. The first Person of the Trinity is, hypostatically, the source and ineffable abyss of the divine mystery; indicating his presence requires not only a disciplined imagination, but the humility to recognize imagination’s helplessness. 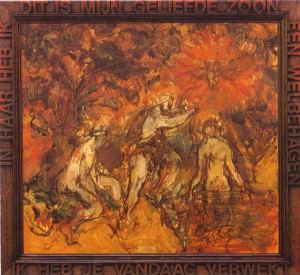 But the Father’s presence was in fact manifested at the event of the baptism itself, as a voice from heaven. The voice from heaven declared, “This is my beloved Son, in whom I am well pleased.” The idea of depicting the voice rather than the person of the Father suggests itself immediately, but it is not an option that has been used much historically. Perhaps there was something about this particular type of integrated combination of words and pictures that did not lend itself to the imaginations of pre-moderns. A scroll with these words in it could perhaps be placed at the top of the icon, but to my knowledge this solution was not used until fairly late in the middle ages. Wherever the message from heaven is written in a scroll, it is attached, like the word balloon of a modern cartoon, to its speaker: an anthropomorphic God the Father (as in Rogier van der Weyden’s altarpiece). The modern Dutch artist who depicted the whole baptism as an epiphany of flame did in fact present the Father as bare text, inscribing the words of the heavenly voice around the edges of the painting’s wooden frame. Except in such isolated cases, however, the written words alone were not considered adequate, and a more direct pictorial indication of the first person of the Trinity was sought. 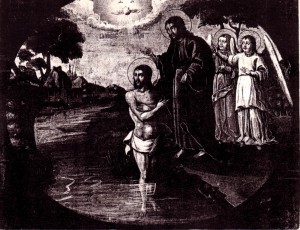 A small hint that the Father’s voice is resounding at the moment pictured by the icon can be given by having a spectator, usually one of the angels, looking up into the sky above the dove. Looking up to where there is nothing visible, the angel can be interpreted as listening to a voice. This is a fine visual cue, but it proved insufficient, and frequently the angel’s eyes seem almost to wander to the Holy Spirit in mid-air instead of to the heaven above. So the next incremental step toward securing a visual cipher for the Father’s presence became the concentric semi-circles, usually blue, which symbolize the opening of the heavens. This is a highly satisfying convention for many reasons, not least of which is that it provides a source for the shaft of light that shines onto Christ. The artistic imagination, however, did not always rest at the restrained, elegant simplicity of this solution. If the circles represent heaven, then it makes sense to portray heavenly things inside of them. With this logic a development began in which a few angels were painted in the semi-circle, on either side of the beam of light, looking downward. Eventually an elaborated image of “the gates of paradise” found its home inside this semi-circle, which sometimes rounded itself off into a complete circle: Angels teem within the circle, surrounding the inmost sphere, which itself has two large ornate doors thrown open to reveal still more angels inside. This is a powerful visual interpretation of what it means for the heavens to open, but it is normally considered too busy to be included in the standard icon. 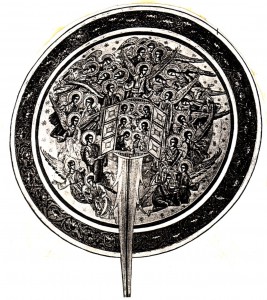 Furthermore, an image of the angelic host is still not a reference to God the Father, the source of the voice at the baptism. At this point we cross a decisive line between those artists who remain within the incarnational restraints of orthodox iconography, and those who feel free to depict God the Father visually. Once the heavens have been opened, artists of the latter type naturally paint God there, seated on a throne and bearded. This is not uncommon in the West; a bearded God the Father in a circle above Christ seems almost to be the rule rather than the exception in books of hours (see both the Visconti Hours and the Tres Riches Heures of the Duke of Berry). Even in the fresco of Giotto, the Father can be seen reaching down to send the Holy Spirit on Christ. In 1745 Pope Benedict XIV set forth the justification for this centuries-old depiction of God the Father as a bearded old man: It is based on Daniel 7:9, in which the Son of Man (interpreted as Jesus Christ) stands before the Ancient of Days (interpreted as God the Father). See his letter Sollicitudini Nostrae (1745), section 32, reprinted in Boespflug, Dieu Dans L’art, p. 47. For the parallel discussion (with the opposite conclusion) in the Russian church, see (Ouspensky, Theology, chapter 16: “The Great Council of Moscow and the Image of God the Father”). However, the depiction of God the Father is not a phenomenon limited to the West; the East, which is supposed to know better, is also full of examples of this type. Again, Ouspensky provides details about the conflict this obviously caused. 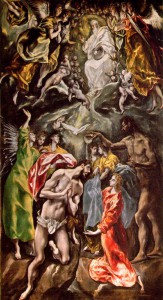 Once the artists had enthroned God the Father in the circle at the top of the baptism icon, the angels seemed to recede to almost mere decoration behind him. Few artists felt the need to combine both a fully-realized heavenly host and the image of God the Father. El Greco, however, had the requisite singlemindedness to take this entire conception to another level of realization, giving the heavenly world almost as much space on his huge canvas (thirteen feet tall, six feet wide) as the earthly scene of the baptism. The figures on the banks of the Jordan (John, Jesus, and six angels) strain toward the heavens which are just above them. The passage between earth and this open heaven, however, is only a narrow zone through which the dove of the Holy Spirit, trailing a stream of fire, descends with wings outspread. El Greco’s expressive image of the coming together of the realms of nature and grace is rooted in a profound Roman Catholic religious vision, and is masterfully realized within the admittedly mannered possibilities available to him. This rescues it from being just the ultimate example of a single iconographic detail grown to ridiculous proportions. Other artists (Orazio Genteleschi for example) divided their compositions evenly between heaven and earth, and did not meet with El Greco’s artistic success. This development serves to put a question mark beside the entire search for a pictorial indication of the Father’s presence.

The main stream of iconic tradition, however, stopped somewhere on the conservative side of halfway. Eager for a visual hook that would indicate not just the presence of God in heaven, but the distinctive hypostatic reality of the Father, icon-makers early and intuitively settled on the image of a hand reaching down from heaven making a sign of blessing. One hand, usually with a cuff or sleeve, extends from the topmost part of the picture. In Verrochio’s Baptism, two hands are shown. They spread apart as if releasing the descending dove, thus emphasizing the Spirit as the gift of the Father, but thereby distracting from the Father’s spoken benediction. The hand image, rooted perhaps primarily in the Old Testament expressions about “the hand of God” or “the arm of the Lord,” is not to be understood as a compromise which settles for depicting only part of God the Father. It is not a representation of God’s hand, but a kind of pictogram for the Father’s presence and blessing. It is almost a hieroglyph, a sign only slightly more visual than a letter of the alphabet. No information whatsoever about the visual appearance of God can be gleaned from it; only the divine presence and beneficence. In the wider iconographic tradition, a hand reaching down from heaven, either from a cloud or from the concentric semicircles, does not always represent the Father. It should not be thought of as a “monogram of the Father” which always, in any icon, serves as a cipher for the first Person, portable to any context. In other iconic configurations it should probably be understood as symbolizing the presence of God the Trinity. Sometimes it is even flanked by the abbreviation IC XC, indicating that it is Christ whose presence is indicated by the hand from heaven (Ouspensky, Theology, p. 373, n. 5). It is only at the baptism that the hand symbolizes the Father, but in that context, given the manifestations of the Son and Spirit, it does so decisively. The presence of the hand of God serves as a clear reminder of the hypostatic particularity of the Father, who is the summit and source of this icon’s trinitarian axis.