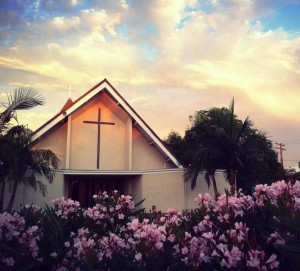 I got invited to preach on Trinity Sunday (May 26, 2013) at Redeemer Church of La Mirada, a church just down the road a bit,  where a lot of my friends and colleagues attend. The sermon is available for download at their website for the time being, and I’ll see if I can figure out how to make it available here at the Scriptorium more permanently. It’s 38 minutes long.

Here’s the text (manuscript, not transcript) of the introduction. I hope to post text of the rest of the sermon later this week.

I’m here to share Trinity Sunday with you and celebrate the blessing of the Trinity.

Many of us don’t experience the doctrine of the Trinity as a blessing; it can seem like more of a burden. It seems like one of the tough parts that was into the Christian faith at some point to test our commitment. All the other stuff about the Christian faith seems to be obviously good news: forgiveness, reconciliation, peace with God, the power of the indwelling Spirit… even some parts of the faith that are hard to believe because they are miraculous, like the resurrection, are at least good news. We know common sense and science tell us dead people don’t get back up, but if that dead person, Jesus, got back up never to die again, that’s good news indeed!

But the doctrine of the Trinity, that one God is one being in three persons, that Father, Son, and Holy Spirit are the one, true God, while each is fully God: that sometimes just seems like unnecessary roughness on the belief system. And if we do manage to believe it, what good does it do? Doesn’t it just get us kicked out of the simple monotheist club, where we’d like to hang out with our Jewish friends and Muslim neighbors?

For churches that observe the traditional liturgical calendar, there is an annual reminder of the doctrine: Trinity Sunday. Church tradition seems to prescribe some reflection on the Trinity as part of your recommended annual doctrinal allowance. So maybe it’s supposed to be good for you:

Or maybe it’s a blessing in disguise: like a sickness that clarifies your life, simplifies things for you. The kind of blessing nobody signs up for.

Or maybe it’s a blessing you can’t afford, like a gift from a rich friend who doesn’t understand that your personal budget doesn’t allow you to pay the upkeep on an exotic fish, or to stable a horse, or to store a yacht.

But I say unto you, the doctrine of the Trinity is a great blessing, and I’m thrilled to share Trinity Sunday with you to celebrate that blessing. Here’s the thing about the blessing of the Trinity: one Sunday a year isn’t enough to get it. If you don’t regularly confront this doctrine as a good thing, nothing I can say from up here on this day is likely to swing your vote.

In fact, Trinity Sunday almost didn’t exist, for this very reason. The church got along fine without it for a thousand years. It was around the year 1000 that somebody proposed setting aside a Sunday for the doctrine, and when the Pope (Pope Alexander II (1061-1073)) heard the proposal, he said NO. It seemed to him that every day was Trinity day, every Sunday was Trinity Sunday, and the church sang “glory be to the Father, and to the Son and to the Holy Ghost” all the time.

But a few hundred years later, Pope Benedict XI instituted it. It was not a major observance. It was upgraded to universal recognition by Pope John 22 in 1316.  In the technical language of liturgy, he made the feast into a “double of the second class.” So there’s Trinity Sunday stuff built into western liturgy for the past 700 years, which is young by universal church standards. We’re trying out this Trinity Sunday thing to see if it sticks, it’s had a good first seven centuries. It wasn’t until 1911 –-July 24, 1911—  that Pope Pius X made it a primary feast of the Catholic year. 1911! That was yesterday.

So Trinity Sunday is not OLD old, just kind of old. And it had to justify its existence. But now it’s built in to the Christian year, and it concludes the festival part of the year. That is, we’ve been counting toward it since Advent and Christmas (the birth of Jesus), with the major stopping points of Good Friday and Easter (death and resurrection of Jesus), then Ascension and Pentecost, where Jesus goes to the right hand of the Father and sends the Holy Spirit.

Once we’ve marched through the Father’s sending of the Son and the Father and Son’s sending of the Spirit, we’ve got the full story, the clear demonstration of the God of the gospel as Father, Son, and Spirit. So this Sunday, without adding anything new, sums up and states clearly what we’ve already experienced. Trinity Sunday, one scholar says, is “derived from the fact that the revelation of God’s nature as Father, Son, and Holy Ghost, which the church has been unfolding since Advent, is now completed” (Walker Gwynne, p. 271).   Anglicans count every Sunday from now to Advent as “Sundays after Trinity,” as in “first Sunday after Trinity,” “second Sunday after Trinity,” up to 27 Sundays after it. Half the church year in the shadow of the full revelation of the Trinity.

But notice that this Sunday sticks out and doesn’t make much sense unless you’ve been following along for six months of Sundays. If you’ve been marking God’s major moves of self-revelation, Trinity Sunday is a kind of harvest of understanding and, yes, blessing: this is what God was getting across to us all along. This is where we draw a circle around the completed thought, and say to each other, “do you get it?” “Have you been noticing it?” “You haven’t missed it, have you? God the Father so loved the world that he gave his Son, and the Son is with us to the end of the age by the Spirit who he poured out from the right hand of the Father.”

So since you’ve marked the major events in that annual church calendar, I get to come in and deliver the punch line: Trinity! Get it?  And more importantly, I have it on good authority that this is a healthy church that gets regular exposure to the thing itself, the presence of God the Father in the work of Christ the Son by the power of the Holy Spirit. So my job as a guest is easy: to declare unto you what you already have experienced and known, to make sure you see it and know it in all its fullness, all its scope, all its richness, all its application.