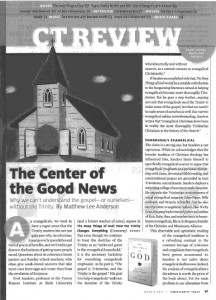 The new issue of Christianity Today has a nice, long review of The Deep Things of God: How the Trinity Changes Everything. Guess what: They like it, give it five stars, and recommend that you ought to drop everything and go buy multiple copies right now. Well, that last part might be between the lines, but you could tell that’s what they were thinking.

The review, under the headline “The Center of the Good News,” is by Matt Anderson, friend-of-Scriptorium and blogger at mere orthodoxy. He does a great job describing the central argument of Deep Things in his own words: How we are led from the experience of salvation to the contemplation of God in himself. He calls the doctrine of the Trinity “the necessary backdrop for everything evangelicals emphasize.”

As is appropriate for a piece in CT, Anderson’s review describes how the ideas in Deep Things fit within the evangelical movement today. As Anderson notes, in this book I play the role of cheerleader for evangelical trinitarianism:

This charitable and optimistic reading of the evangelical tradition is a refreshing contrast to the constant barrage of criticisms and complaints that evangelicals have grown accustomed to. Sanders is not naive about the evangelical shallowness (indeed, his analysis of evangelicalism’s decadence is worth the price of the book alone). Yet the main problem is our alientation from our Trinitarian roots, which extend ‘not just into the history of the movement, but into the reality of who we are in Christ.’

One of the tensions in contemporary evangelicalism is about whether the gospel itself extends to social justice, or whether the gospel transforms individuals who then (in a next step, as it were) pursue social justice. Though Deep Things doesn’t engage that conversation, Anderson notes that its message of gospel-based trinitarianism is a “welcome reminder that regardless of whether the gospel is for society or individuals, its primary purpose is to draw us into the inner life of God.” I’m so glad that astute observers like Anderson are picking up on this. At the risk of sounding too expansive (or too abstract), what I’m attempting in Deep Things is to re-order evangelical habits of thought, so that we are more consistent in starting with God, then moving to the history of salvation, then moving to our own experience (for the less highfalutin’ version of that, see the choo-choo train diagram on p. 187 of the book).

The CT review also picks up on the special emphasis on salvation as adoption. The reason for this emphasis is, partly, that a trinitarian doctrine of salvation is just bound to highlight the Father’s action to bring us into his family through his only-begotten Son and their indwelling Spirit. But Anderson also notes the way this contrasts with what we are used to hearing in evangelicalism broadly:

The uniqueness of Sanders’s account of the gospel for evangelical Protestants is clear by the relative absence of language about justification. Sanders expands the horizon of salvation beyond justification to include our adoption as children of God, whch he dubs ‘the mightiest of God’s mighty actsof salvation.” Sanders is explicit that this does not minimize justification but rather puts it in its proper context. Salvation is more, but not less, than justification –and that more is our adoption as sons and daughters of God.

That is exactly right. But I also hasten to point out that on the pages of Deep Things where I make this case, I am careful to quote card-carrying evangelical authorities who have already said this. In other words, don’t blame me for relativizing justification by faith, blame John Calvin and J.I. Packer!

Anderson ends the review with some substantive critiques, especially pointing out that “it’s not clear what Sanders wants evangelicals to do differently –other than read his book– to more deeply embed the Trinity into our movement.” He’s got me there, I want people to read the book. On the lack of action points, I have no defense to offer. I’m praying that the book falls into the hands of people with more ministry experience and know-how than I have, who can devise the action points and take the next steps. I’m just a perfesser who reads and thinks and talks all day; this is as practical as I get. Writing Deep Things is my way of passing the baton to pastors, worship leaders, and people like Matt Anderson, who can run the next lap.

Last year Matt Anderson –former student of mine, friend, endorser of the book– read an earlier working draft of Deep Things which included some sweeping promises about all the swell things I was going to do in later chapters –chapters I ran out of space for, never finished, and moved to an open folder marked “sequel.” And in his final critiques, Anderson points out that this restructuring left some pretty significant gaps in the message: where is the church, where is world mission, where is the invitation to explore the great, ancient tradition behind evangelicalism? Indeed. Those are crucial links in the chain of gospel trinitarianism. All I can say is that I’m writing as fast as I can. And so are lots of other folks, in what I hope is a movement of renewal for a deeply trinitarian evangelicalism.