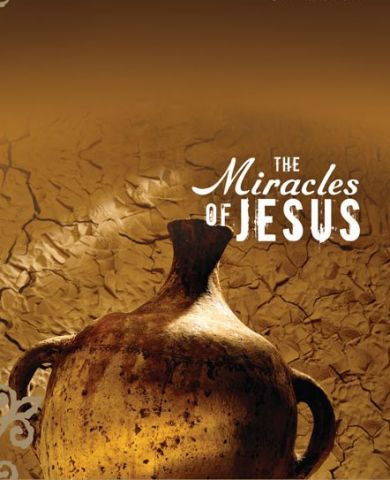 Miracles are all about getting attention. The miracles reported in the Bible are no exception, and are sometimes designated as signs and wonders, that is, pointers and shocks. The miracles that Jesus Christ did during his earthly ministry bear this twofold structure prominently: they startle and indicate; they shock and they point to something. What is it that they point to?

C. S. Lewis believed (and he claimed to have learned it from Athanasius) that the miracles of Jesus pointed to his deity. They didn’t point to his deity simply by being amazing feats of strength that only God could perform; rather, they pointed to Jesus’ deity by being miniature versions of what God does on a universal scale. Lewis viewed the miracles of Jesus not as “arbitrary and meaningless violations of the laws of Nature,” but as “the re-telling in capital letters of the same message which Nature writes in her crabbed cursive hand; the very operations one would expect of Him who was so full of life that when He wished to die He had to “borrow death from others.”” (from Lewis’ introduction Athanasius’ On the Incarnation) Jesus’ miracles weren’t sheer power displays, they were actions in the family style of the Son imitating the Father. As he elaborates in his book Miracles, “I contend that in all these miracles alike the incarnate God does suddenly and locally something that God has done or will do in general. Each miracle writes for us in small letters something that God has already written, or will write, in letters almost too large to be noticed, across the whole canvas of Nature. They focus at a particular point either God’s actual, or His future, operations on the universe.”

It’s a good hypothesis, and Lewis applies it, with characteristic insight, to representative types of Jesus’ miracles. But for all the help he provides in getting the big picture on miracles, Lewis’ schema (finding the cosmic design reduced to human scale in each of Jesus’ miracles) sometimes has to be forced onto a particular miracle, leaving the reader wondering what else that miracle might teach aside from illustrating Lewis’ big point. Lewis shows that the miracles of Jesus have content, and that content makes sense.

However, to dig deeper into what sense is made by each of the miracles of Jesus, you would have to pay much closer attention to each of them as they are reported in the New Testament. Each of Jesus’ miracles has depths of meaning in it that should be pondered, discussed, and explored at length. I recently came across a great resource to help with that. It’s a Bible study designed for small groups, called The Miracles of Jesus in the Deeper Connections series. The central component is a DVD with six different studies on it, each led by big-name Bible scholars (Witherington, Strauss, Burge, etc.), along with a 130-page book. I haven’t tried it out with a group yet, but it’s pretty perfectly designed to feel a lot like watching a TV show (interesting locations, a hip young host, music and snappy editing) and yet direct you to examine Scripture.

My favorite sequence in the Miracles of Jesus DVD features Talbot professor Mike Wilkins talking about the feeding of the five thousand and Jesus walking on the water (Matthew 14). Wilkins, a surfer, speaks from a beach overlook, and as the sun goes down he describes the events, the backgrounds, the story behind the story, and just generally has a great time talking through the text. He sounds like he’s following a loosely-drafted script that he wrote out himself, which gives you the best of both worlds: conversationally direct delivery, but focused, substantive, orderly teaching.

What’s the meaning of this miracle? It’s not something that Lewis’ schema would deliver. In Matthew’s gospel, this scene is all about Rabbi Jesus leading the disciples from their fragmentary notions of who this Messiah is supposed to be, to a sharper and sharper knowledge of just who they are dealing with. As the disciples experience the breakthrough (or breakthroughs) and come to worship Jesus, Wilkins makes the connection to reading the Gospel today: we are in need of that same journey of understanding.

Partial images that we all carry around need to be completed in our lives and in our thinking. For example, if we think of Jesus as a friend, we need to recognize that he’s not just a buddy, he’s the Lord of the universe. If we understand Jesus to be this nice, meek, gentle shepherd, we better think of him also as the revolutionary who condemned the religious establishment of Israel. Jesus is all those images, but he’s actually much more … We may have a limited walk with Jesus if we only focus one one aspect over another. A clear understanding of Jesus for all that he is will cause us, like the disciples in the boat, to worship him.

The other five segments are also good, and the DVD has 3 hours of teaching on it. I suppose Bible Study products are like vacuum cleaners: the best one is the one you actually use on a regular basis. This Deeper Connections series is really usable. There are two other DVDs in the series besides Miracles: “The Parables of Jesus,” and “The Prayers of Jesus.” General Editor Matt Williams really found a way to cram in all the historical background, scriptural focus, and real life application without making the whole package intimidating.