In the summer of 1912, the Bible Institute of Los Angeles had been in business for four years, and was about to make major changes. They were putting up an important building in downtown Los Angeles, and hiring the most famous evangelist in the world, R. A. Torrey, as their first academic dean. That July, they published an editorial in their monthly magazine, The King’s Business, putting their plans into perspective. 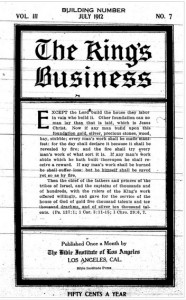 I don’t know who wrote the unsigned editorial. It could be the work of one of the main operational founders, billionaire oilman Lyman Stewart or urban pastor T. C. Horton. It could also be the work of J.H. Sammis (author of the hymn Trust and Obey), who wrote a lot of the text of the King’s Business at that time. The ideals and vision of the institute were so much held in common in 1912 that any one of them could speak for the others in public. Whoever wrote it, this short piece (Read the original page images here.) puts the founding of Biola in context: Its historical context as the next step in a movement started by Moody: its ecumenical context as an interdenominational supplier of trained laypeople for all the churches; and its global context as a strategic plant on the Pacific Rim, very close to Latin America.

If you’re overly excitable, you might want to read it in small doses. These men and women had vision that we need to recover for our time.

Bible schools have come to stay! The test of a generation has demonstrated this. They are safe and permanent investments; foundations to stand until the Lord Comes. The schools of Spurgeon, Guinness, Moody and Gordon, the great pioneers in the field, have sowed the earth with evangelists, teachers, missionaries, home and foreign, secretaries and parish helpers noted for loyalty to God’s Word, personal holiness, sane and consecrated zeal, and abundant fruitfulness.

Those clear eyed men of God foresaw the approaching lapse from primitive faith and evangelism, and prepared to meet it. They saw the old and ever need of sappers and miners, men and women of unsophisticated faith, and the inability of standard methods, and prolonged processes, to supply it, and bequeathed the Bible training school to the Churchy. We must multiply our inheritance.

The conditions they foresaw are upon us. Great is our OPPORTUNITY; equally great our RESPONSIBILITY; and equal to both our ABILITY, if those who can pray, PRAY; those who can labor, LABOR; those who can give, GIVE. 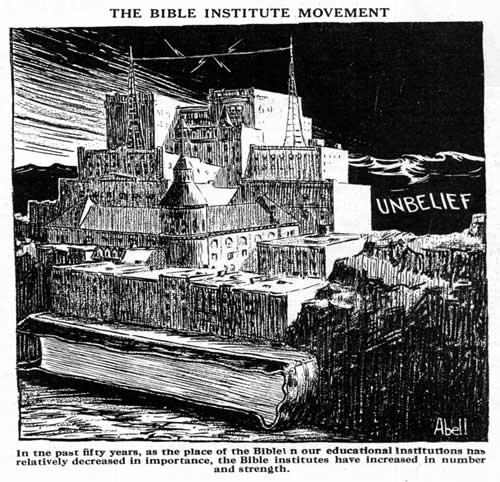 The need was never so great! Populations grow by leaps and bounds.They become more and more complex. The craze for riches; the lust of luxury; the passion for pleasure; the traps for the young; godless and aggressive infidelity; unashamed debauchery; crude and lawless socialism; and the bewildering maze of antichristian religions, these, all, present a satanic situation with which the now available forces are unable to cope.

What Spurgeon did for Great Britain, what Moody for the East, we must do for our West, and join all for the world.

“They were all scattered abroad EXCEPT THE APOSTLES and went everywhere preaching the Word.”

The first evangelists who “turned the world upside down” were versed only in that gospel which they were conscious had regenerated and sanctified their own souls. God give us, and increase, a host of men of the highest intellectual and scholastic culture, with that same spiritual experience, but it is in that rank and file on which the early Church relied that they and we all must hope today, if we are to measure up to the demands of the hour. We need “apostles” but more now we need “evangelists” in the broad sense of the word.

THE BIBLE INSTITUTE OF LOS ANGELES

Is preparing to train an army of good soldiers of Jesus Christ able to endure hardship; drilled to wield the Sword of the Spirit, and handle shield and buckler, content with their wages; ready to go where they are sent; to be massed on the foreign field; to garrison post or outpost at home; to do scout and picket duty, in all manner of direct evangelism. The conditions must be met by re-inforcing present agencies with such a host, men and women of tried Christian character and experience trained in the knowledge of the Bible, God’s alone instrument of salvation.

What might be accomplished if the Churches of this City multiplied tenfold such work as is done by our Bible women, city missions and out door evangelism. What if all towns and cities were as liberally supplied? We labor pastors; workers that should be acceptable to all evangelical denominations, because trained to the faith and not to a form.

NOW IS THE ACCEPTED TIME

The hour strikes! “The army that moves first,” said Grant at Shiloh, “will win this battle.” “We will move first,” replied Sherman. But first or last the time to move has come. The Church must call out her reserves; she must mobilize her entire force; or as in other ages and regions be overwhelmed by the powers of darkness.

Los Angeles is our logical center for such a work. California bids fair to double her population by the end of the first quarter of the 20th century. The sum of her census should reach 6,000,000 by that time, and of these Los Angeles may claim a sixth. Practically a million souls will live within the city’s limits.

Now take your map. You see that what New York is on the eastern coast, Los Angeles is destined to be on the western. What that city is to the Atlantic and Europe, we are to the Pacific and Asia; a more populous continent, more numerous isles, and a more needy hemisphere. Japan is our next door neighour; China only a door beyond; China immense, in motion, claiming her place in the advance of civilization. Alaska, and the Philippines are ours, and South America’s coastline embraces 50,000,000, as needy of the Word of God as Pagan Asia. Mexico is on our borders, and in the last decade, only, 33,384 of her citizens crossed them. Presently the great canal will link the seas, and the commerce of the world passing to and fro, from Occident and Orient, discharge their migrants and merchandise at our projected and commodious harbor.

This city with its assured metropolitan prospects, and cosmopolitan concourse; affording opportunity for the most varied experience in practical ministry; its strong Christian community, more than three times that of San Francisco; its unsurpassed climate, advantageous to student life, and perennial out of door service; its already established and influential Bible Institute; is the natural seat of such an evangelistic plant as we propose.

Biblical education is for edification as well as evangelization. Scores, not on our register, avail themselves of the instruction of our class rooms, and hundreds listen to the popular lectures of the auditorium. This must have an important effect on the Christian and Church life of our city and vicinity. Think of the influence when our class rooms are open day and night; when thousands assemble in our great auditorium and sit at the feet of the world’s greatest evangelists and Bible teachers.

Worldly philanthropy endows lectureships and institutions for popular education in science, politics, economics, and art. Why should not lovers of God provide as liberally for the edification of the Lord’s people who hunger and thirst after His Word? We exult in the thought of the thousands that shall receive instruction and incentive to broader knowledge and higher living in the ways of God, through generations to come if He delays His appearing.

“The field is the world” and we must sow it with the seed of the Word, and the Children of the Kingdom.

CHRISTIAN CAPITALISTS WE CLAIM A SHARE IN YOUR INVESTMENTS, AND CAN PLEDGE YOU IN THE NAME OF THE LORD CELESTIAL DIVIDENDS (Mat. 19:24, 29)

“Gold is merely gold until transmitted into spiritual values in the souls of men. In the lives of careless posterity gold degenerates to lead or baser metal, but in the lives of the people born again, through Christian character, motives, deeds, material values ascend into the glory of God with blessings for mankind.”