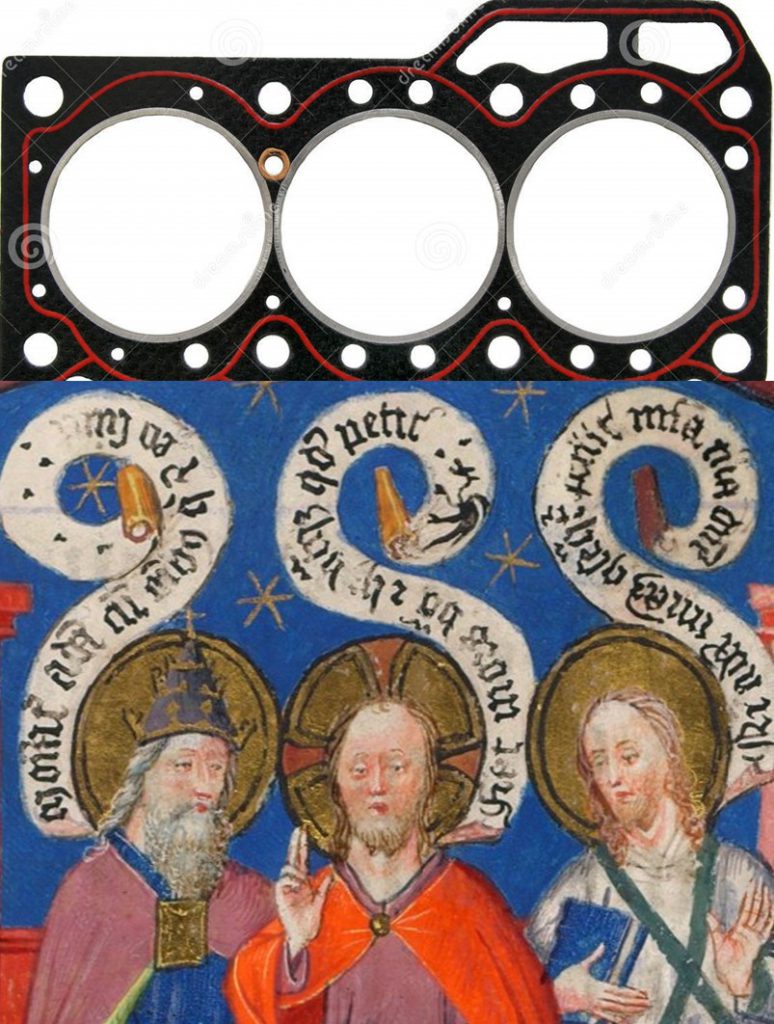 To speak accurately about the triune God, theology has to indicate that he is high and lifted up, inhabits eternity, and has Holy as a name; yet simultaneously to indicate that he is intimately present with the contrite and lowly. His eyes are too pure to look on evil, yet he girds his loins and goes out to confront it in its own camp. He is just and the justifier of those who believe: that is, just with a justice that he doesn’t fetch from afar but enjoys in its eternal fullness, and the justifier who takes on the whole catastrophe of fallen finitude.

If you set these contrasting truths in two columns, the sheer distance between them would be an invitation to do some theological work. What concepts would we throw across the gulf between them in an effort to say something intelligible about the God who sits so high and stoops so low? We would do what we could, doctrinally: describe transcendence and immanence; speak of the inner works and the outer works of God; praise the one who gave condescension a good name.

But the two columns would also pose another theological task: it’s not that they’re so far apart, but that they’re so different. There is the austere simplicity of the eternal triune Lord on the one hand, and the passionate involvement of God with us on the other hand. Yonder is God without accidents enthroned without incident, and here among us is the same God, giving his only Son, or carrying a cross, or being internationally poured out. And the more you play up one side, the more you have to insist on the other as well. The more you load up the first side with all the trappings of “classical theism” (aseity, immutability, impassibility, simplicity, beatitude), the more you have to specify that your intention to affirm that this is the God who is deeply immersed in the costly work of revelation, reconciliation, and redemption. And vice versa.

To think those strongly contrasting themes together, to say them in a way that doesn’t juggle one of them away or leave them at odds with each other (as the above paragraphs are in danger of doing), Christian theology works out some conceptual tools. One of the classic concepts that helps fit the two together is the concept of covenant. Look how the Westminster Confession of Faith (7.1) introduces the idea:

The distance between God and the creature is so great, that although reasonable creatures do owe obedience unto Him as their Creator, yet they could never have any fruition of Him as their blessedness and reward but by some voluntary condescension on God’s part, which He hath been pleased to express by way of covenant.

Notice the challenge (“distance so great…never have any fruition”) and the way covenant is brought in as a solution. The two-sidedness of the covenant structure lets it function as a kind of conceptual gasket, fitting perfectly on each side (though installed, if we were to continue the mechanical metaphor, exclusively from the divine side via “voluntary condescension”). The point is not just the formal observation that “the divine decree functions as a hinge between theology’s two great themes: God and all things in relation to God.” (Swain, Christian Dogmatics, 107). The point is that it decree/covenant sits between the two and enables us to say what we need to say on both sides.

Covenant is of course a directly biblical concept, but in the hands of Reformed scholasticism it was honed in a particular way and pressed to serve particular ends. I would say it was developed into a theologoumenon, a confessional hypothesis about what must be true if we are to affirm all the things we know we have to affirm about the God we learn of in Holy Scripture.

When this kind of theologizing about the covenant reached its high point in post-Reformation Reformed scholasticism, it was elaborated with a formidable array of conceptual specifications: the order of the decrees, the pactum salutis, and so on. And in recent years it is being retrieved by Reformed theologians with increasing vigor and sophistication. Michael Horton’s multi-volume work has done a lot toward this end, and John Webster gave a programmatic shove in the right direction with his use of the pactum salutis to balance Perfection and Presence. Just this year, Michael Allen and Scott Swain’s Christian Dogmatics gave the covenant of redemption a surprisingly prominent position in a table of contents with only sixteen entries (among which stands no distinct pneumatology entry). And J.V. Fesko has released The Trinity and the Covenant of Redemption, a patient rehabilitation of the topic with special attention to its biblical character. Matthew Barrett offered a brief and bloggish introduction to the doctrine this summer, with reference to recent online controversies, and Mark Jones, having dissertated on them, also deployed similar resources (perhaps to different ends).

I think this theological gasketry is promising. It takes some work to hold the austere classical trinitarianism of the great tradition’s doctrine of God together with the passionate self-giving of God in the Father’s sending of the Son and the Holy Spirit. The conceptual moves that make up the doctrine of the covenant of redemption make room for a divine disposition that is a reality ad intra, yet is directed ad extra; free but not essential; truly rooted in God yet truly not necessary. If it works, it lets you have your cake and eat it, too.

Gary Badcock once made a very insightful comment about this theologoumenon. He said:

The decrees of the Reformed are in fact surprisingly akin to the doctrine of the divine energies in Eastern Christianity. Both doctrines are susceptible to trinitarian explication; for example, both have an application to the divine life of the three persons ad intra, or from all eternity, and also ad extra, or in relation to the created order (though these are always rooted in the relations ad intra). We might add as well that neither view is commonly understood within mainstream Western theology.” (Covenant Theology: Contemporary Approaches, ed Mark J. Cartledge and David Mills, Paternoster, 2001) 71-72.

I think that comparison, though jarring, is right, and I don’t intend it as a critique of the doctrine of the covenant of redemption as handled by Reformed scholasticism or its recent champions. Some such gasket is needed. Theologians who aren’t convinced that the essence-energies distinction delivers on its promise would do well to look into the pactum salutis. Theologians who aren’t convinced that the covenant of redemption delivers on its promise either had better provide their own gasket. Because here is a challenge for all Christian theologians.