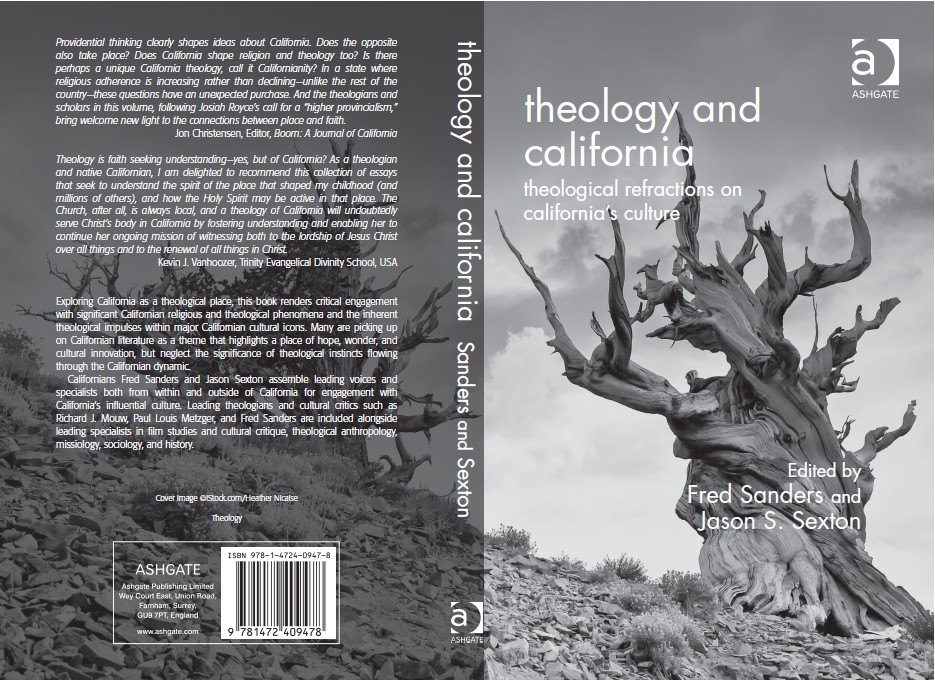 I’m pleased to announce the publication of a strange, new book: Theology and California: Theological Refractions on California’s Culture (Ashgate, 2014), edited by Jason Sexton and me. It’s available in hardcover for your libraries, softcover with a gorgeous cover photo, and e-book for portability.

As Kevin Vanhoozer asks back-handedly on the back cover, “Theology is faith seeking understanding –yes, but of California?”

Yes, of California. This book of essays is the result of several years of collaboration in a project called Theological Engagement with California Culture, which Jason and I dreamed up around 2010 and have been pursuing ever since, in a series of small interdisciplinary workshops and conferences where we’ve been joined by a host of interesting scholars. TECC’s work is ongoing: we’re hosting two more sets of papers at this November’s ETS & AAR meetings in San Diego, where –spoiler alert and I kid you not– Richard Mouw will introduce Gerhardus Vos as a California poet.

And with the publication of this Ashgate volume, we’ll be doing some book release events at places like Biola University, Cal State Fullerton, Vroman’s Books in Pasadena, and Green Apple Books in San Francisco. That last event, by the way, features a conversation with eminent California historian Kevin Starr.

This is something relatively new under the warm California sun, and may take a while to figure out, so here’s a taste of it. Consider this table of contents with a representative quotation from each of the chapters.  And consider buying the book, or recommending it to your library.

1 The Enigma of California: Reflections on a Theological Subject (Richard J. Mouw)

We can generalize here on the images we applied to California cuisine: innovation and eclecticism. California means innovative drawing together from diverse sources, perhaps even suggesting some sort of stable locatedness from which to draw. This produces much that is good –there is much to thank God for in what we have received from Silicon Valley and various other things the California imagination and industry has given to the world. But the resulting way of life can sometimes become a surface thing, lacking depth, an absence of rootedness.

“California Studies” is now, as they say, a thing. It has classes, courses of study, academic conferences, a journal, and in the inevitable logic of academia, it will no doubt have majors and graduate degrees before long. In this interdisciplinary conversation, theologians have not been prominent so far. As a result, the conversation has lacked a depth and seriousness which theological categories could provide.

A theological reckoning with California identifies a culture that uniquely creates “myth” and re-creates this same vision for others. And what kind of theology can engage with this culture? The kind that doesn’t let the siren calling myths have the final say, confronting them by the coherence of the indicative nature of Christian witness (Acts 1:8), and expressing good news in various evangelistic ways, especially in meaningful localized forms of service for the common good.

The California missions provide an argument for the state’s cohesion… Frs Serra and Lasuen did not distinguish between north and south in their minds as they set up the missions –to them, it was all one piece of land. As such, Fr Serra, Fr Lasuen, and the other Franciscans can be viewed as establishing California by uniting the 21 missions in the same way that the Founding Fathers can be viewed as establishing the US by uniting the original 13 colonies. Perhaps this can be a good historical rethink of California and the British colonies framing the founding of our nation –it was not just a one-directional sweep from East to West, but rather Spain landed on the West, Britain on the East, and they met just over the Sierras.

From its love affair with spectacle and broadcasting to its emphasis on eternal youth, celebrity, and most importantly, human perfection, the culture has provided heady material for an ad hoc belief system I have called, for lack of a better word, California-ism. Among other things, this belief system allows for the propagation of man-made forms of transcendence, especially in and around Hollywood, based on the imperial idea that people and their manufactured systems can be their own gods.

6 In Pursuit of the Consumer Crown or the Crucified Crown? (Matthew S. Farlow)

Is the model of the megachurch driven towards the empowerment of the individual and their consumeristic mindset? Or does it promote and embody a Christ-centered reality that seeks to participate in Christ so as to elevate the “other” as opposed to commodifying them? This chapter suggests that the theological underpinnings of the church are dramatic in that they require participation as opposed to observation.

7 From the Beach Boys to Surfer’s Chapel: A Theology of California Surf Culture (Robert S. Covolo)

In contrast to a facile romanticism or, conversely, a nihilistic fatalism, the biblical narrative views the sea through a complex lens as both a vehicle of judgment and grace –a foreboding and providential realm. Emulating the Bible’s complex understanding of the sea, surfers speak of the sea as both terrible and beautiful –a means of both revelation and judgment: “You are simultaneously propelled by the wave and pursued by it. The best position is the worst; the greatest power is closest to the curl. Apotheosis and annihilation are separate by the narrowest margins.”

My thesis is that by viewing the entrepreneurial ethos of Silicon Valley through a biblical lens, we shall gain insights into the business climate which has produced such remarkable entrepreneurial success. Through this study I hope to offer fresh insight into the social, cultural, and moral conditions which have contributed to the ethos of Silicon Valley, and I hope also to gain wisdom capable of contributing to the cultivation of productive and soul-enriching work in modern society in general.

Churches from across the city and the region must come together in solidarity to address the problem of social fragmentation and what it entails for gang violence. It will not do to engage in drive-by evangelism, where affluent churches in well-to-do sections of town, the suburbs or outlying areas engage in charity events and quick-fix solutions and make inner city ministries victims of their charity or worse.

10 Is There a Theology of California? (Fred Sanders)

As for an application of such a higher provincialism, or localization, of theology to the subject of California, that task is perhaps best thought of as somewhere between “A Theology of California” and “Theology from California.” Those two phrases would encapsulate the two main emphases of such a project. The former, “Theology of California,” indicates bringing theological reflection to bear on this entity which is California, to offer a theological account of its existence and character. The latter, “Theology from California,” indicates that we’re doing theological reflection about the usual subjects (for example, God, creation, providence, humanity, sin, redemption, church, eschatology, and others) in this particular location, intentionally cultivating resources that are Californian.

11 Is There a Theology of California? A Sociologist’s Response (Richard Flory)

In the end, I think one way to think about California and theology is not to focus on the unique or unusual characteristics of California, or theology of/from here, or to argue for some sort of California theological exceptionalism. Rather, perhaps one goal might be to create a prophetic role within and for the theology that results from this project that is rooted in the experiences and realities of California that then might serve as a model for thinking about theology more broadly. As my USC colleague Manuel Pastor likes to say, “California is America, only sooner.” Thus perhaps a theology of/from California(s) can make a contribution to theological discourse that, while rooted in the California experience, transcends that experience.

12 Is There a Theology of California? An Historian’s Response (Richard Pointer)

Reading some of the other chapters in this book makes it clear that the TECC Project wants to pursue what might be labeled a “Theology for California.” By that I mean work that will be of direct service to the church and Christian activity in California. Crafting such a theology or theologies will naturally fall primarily to the theologians. But they will do well to keep inviting the sociologists, historians, and other students of the Golden State to the table.