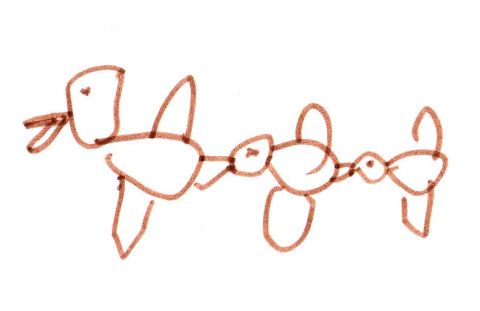 Phoebe Age Six has drawn three birds flying. She depicts each bird with a severe simplicity: Four ovals, two lines, and dot. The first bird gets a bit of special treatment: the two lines of his beak are expanded to be flattened ovals themselves. Each bird has its own minor distinctions, and the rapid loops with which the artist defined the wings show signs of having been laid down sometimes clockwise, sometimes counter-clockwise. But these three birds are quite similar in their basic construction: one form, repeated three times, decreasing each time as you read the image left to right.

Because of the stark simplicity of the bird form, Phoebe Age Six has set up a perfect instance of visual ambiguity: How are we to interpret the decrease in the size of the birds? Is this in fact an aerial convoy of Biggest Bird, Medium Bird, and Smallest Bird? That might explain why each bird is tailgating the previous bird so very closely: the smaller birds could be drafting off of the airflow of the larger, leading bird. They are practically bumping into each other in this close flight pattern.

On the other hand, if all three birds are the same size, then the smaller ones are actually further back from the viewer. In that case, they are not bumping into each other at all, but flying with considerable lateral distance between them. Phoebe Age Six, on this interpretation, would be using two conventional visual tricks to suggest perspective: Decreasing size inversely proportional to proximity to the viewer, and outline overlap in which closer objects impinge over further objects and block out part of their form. However, even working together, these two tricks cannot send the viewer enough information to disambiguate the forms. The outline overlap, for one thing, does not eclipse enough of the smaller birds’ forms: rather than overlapping, they are nearly contiguous. And the decreasing size, since it is the visual problem we are trying to interpret, cannot provide us the materials for a solution.

But there are more tricks in an artist’s toolkit than outline overlap and decreasing size. There is also something called atmospheric perspective, which decreases the clarity, darkness, or focus of objects further away. Notice how the application of atmospheric perspective adds new information to this image: 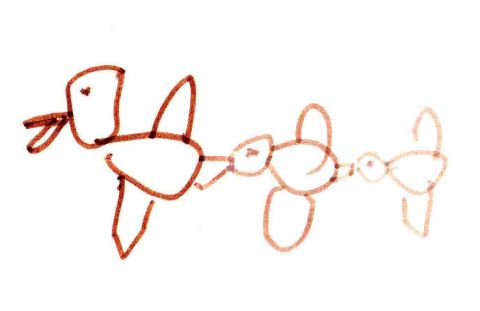 Still, however, there is not enough information for a definitive interpretation. Instead of apparently receding further into the background, these ghosted images could be stylized motion indicators, as if one bird were flying so fast that it leaves two small after-images.

The fundamental problem is at the level of composition. As long as the three bird forms bump right into each other, it will be impossible to let the viewer know exactly what is happening. Since good composition is all about eliminating ambiguity, we can re-compose the picture thus: 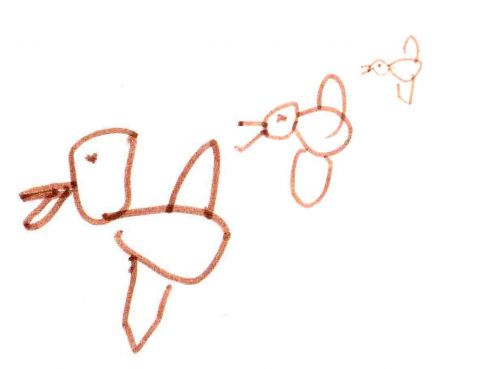 Now that we have eliminated the element of overlap, it is easier to see the three birds receding into a three-dimensional space. We also made the smaller birds a bit smaller still, to help guide the viewer’s eye back into the implied perspective. With this new configuration of forms, the atmospheric perspective can do its work quite effectively.

Having made such material improvements in the image, it is a small step to add a background color and digitally add a few clouds. 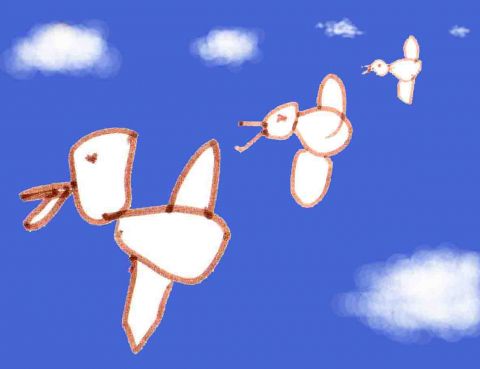 Perfect! Every reasonable viewer would prefer the utterly unambiguous image to the original image, which, admitting of no definitive interpretation, simply raised more questions than it answered.