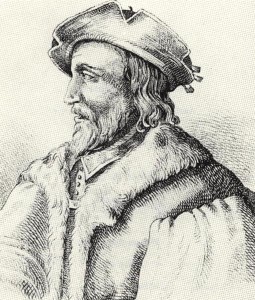 Balthasar Hubmaier (born around 1480) was martyred on March 10, 1528. Hubmaier was trained in Roman Catholic theology on the eve of the Reformation, earning a doctorate with the Johann Eck who would later be on the front line of attacking Luther. He became convinced of Protestant doctrines and allied himself with the Zwinglians at Zurich. As he continued his studies, he became convinced that water baptism is for adult believers, not babies.

It’s hard to remember how radical this view, believer’s baptism, was considered to be back in the sixteenth century. If you became “baptist,” you were considered not just doctrinally wrong or unpopular, but a positive danger to the foundations of civic order in Christendom: an enemy of the state. The Roman Catholic church and the Protestant churches agreed that you should repent or die; the best you could hope for was exile from established civilization. Hubmaier himself had the distinction of being imprisoned and tortured in Zwingli’s Zurich as well as in Catholic Vienna.

When placed on trial, Hubmaier prepared a careful statement that emphasized the common beliefs held by all Christians. But he was burned at the stake for the handful of points that deviated from the consensus of the day.

Conventional wisdom says that the anabaptists were simple folk with a practical mentality, more inclined to live a Christ-like life than to theologize much. We don’t usually look for academically-trained theologians among the early anabaptist groups, because there aren’t many there to find. But Hubmaier is the exception, and his writings reveal a mind of uncommon scope and insight. As an instance, look how sagaciously he sets up his teaching about Christian conduct in his treatise on the freedom of the will:

Though for some years now great zeal and diligence have been expended to make known the gospel to all creatures, yet I find several people who, alas, have up to now really learned and grabbed only two articles from all the preaching. The first is, as they say: “We believe, faith saves us.” The other: “We cannot do anything good, God works in us the willing and doing, we have no free will.” Now such assertions are only half-truths, from which also one can gain nothing more than half a judgment. Therefore, whoever makes up a complete evaluation from these and does not lay on the scale the opposing passages of Scripture, for him the half-truth is far more harmful than an outright lie, when the half-truth is believed and sold by its appearance for a whole truth. Hence come all sects, quarrels, and heresies, when one makes patchwork of the Scriptures, not putting together the opposing Scriptures and uniting them both in a final conclusion. … It is under just the cloak of these aforementioned half-truths that all sorts of wickedness, unfaithfulness, and unrighteousness have completely gotten the upper hand. …All this takes place, sad to say, under the appearance of the gospel… Indeed, I have heard from many people that for along time they have not prayed, nor fasted, nor given alms because their priests tell how their works are of no avail before god and therefore they at once let them go.

Hubmaier was the exception in at least one other way: He stands out from most early anabaptists for his rejection of absolute pacificism.

His works are well worth reading, though his life ended too soon and he was compelled to write too much about believer’s baptism, to the neglect of the many other Christian doctrines of which he would have been an able expositor.