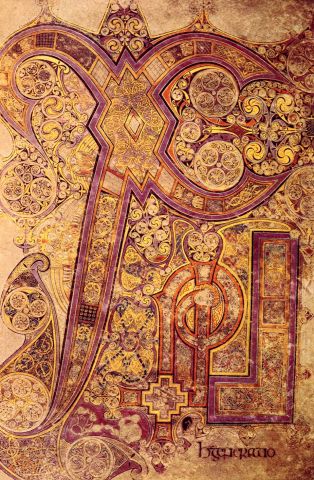 Today is the day Finan, the second bishop of Lindisfarne, died. What is Lindisfarne? Well, go to the far North of England, the part that’s almost Scotland, called Northumbria. Now wait for low tide so you can walk out to the tiny tidal island: Lindisfarne, or Holy Island. What a place for a monastery, for a castle, for a bishopric!

Finan is far less famous than the great Aidan of Lindisfarne, the first bishop of the place (635-51). The Venerable Bede had a lot to say about Aidan, but for Finan, Bede doesn’t tell us much besides that he was “of a violent temper” and rejected the Roman way of figuring Easter. This slender bit of info has made Finan something of a hero for people who like to picture a British or Celtic Christianity that was doing just fine without Rome, thank you very much. It’s hard to believe how much has been made of this Celtic spirituality stuff. You can read a shelf of books about it, take classes on it, go on retreats to learn to practice it, etc. Supposedly it’s a kind of non-authoritarian Christianity of the heart, which retains a lot of groovy paganism, affirms life, nurtures nature, and so on. All of this from a few scraps of literary evidence and some archaeological remains.

Paul Zahl points out, “Celtic spirituality is notorious wax nose! Why is that? Because no one really knows anything absolutely verifiable about it. The sources for Celtic Christianity are extremely limited. A great deal of what we think Celtic Christians felt and taught and prayed are figments of nineteenth-century imagination. Yes, there are some elements in the archaeological record that seem to bear comparison with New Age thinking, yin/yang, complementarity and “weaving,” nonhierarchical views of women and men, and so on.”

Perhaps the safest way to find what’s really solid in the Celtic revival thing is to read Ian Bradley’s book Celtic Christianity: Making Myths and Chasing Dreams. He doesn’t give you quite as much to build on as the more gullible advocates of Celtic spirituality might, but he does give you a lot, and none of it will have to be un-learned. Bradley says:

In the context of the current revival, it is tempting to suggest that Celtic Christianity is less an actual phenomenon defined in historical and geographical terms than an artificial construct created out of wishful thinking, romantic nostalgia and the projection of all kinds of dreams about what should and might be. When I asked a group of students half-way through an MA course on Celtic Christianity what they understood by the phrase, their definitions included ‘an intense sense of presence and place,’ ‘an intimate liaison between humanity and the totality of creation,’ ‘a poetic rather than rational approach to faith,’ ‘an indigenous Trinitarian form of Christianity designed for free spirits,’ ‘wholeness and mystery,’ ‘a loving God revealed through his creation,’ and ‘a church specially rooted in place and culture.’ I suspect that if I had asked what they found most lacking in the contemporary church and modern forms of religious expression, I would have received remarkably similar answers.

Back to Finan. He lived on Lindisfarne, a tiny tidal island! That gives plenty of what you might call scope for the imagination.