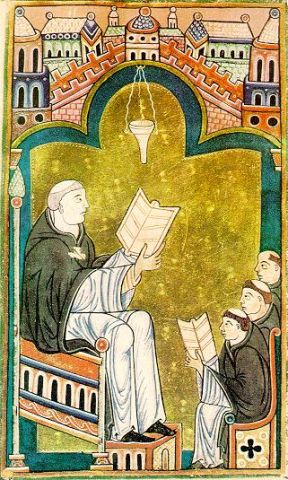 Hugh (1096-1141) taught theology at St. Victor, which was the abbey of the Augustinian Canons Regular in Paris. Hugh began teaching there in 1125, just a dozen years after its founding by a disciple of Anselm of Canterbury.

“Cathedra doctoris sacra Scriptura est,” said Hugh (an oft-quoted aphorism from his Miscellanies 1:75), which means literally “The chair of the doctor is the holy Scriptures.” Today we would probably paraphrase that as something like “the authority from which a theological teacher teaches is the holy Bible,” or maybe “the theologian sits alone on the word of God, the B-I-B-L-E.”

Another motto of Hugh’s was “Learn Everything. Afterwards, you will see that nothing is superfluous (Didascalion 6:3).” So you can imagine what kind of school he ran, and what sort of tools he brought to the interpreter’s task.

Hugh is an exemplary medieval Latin theologian in many ways. Here is an excerpt from his Didascalion, a kind of systematic account of education and interpretation. Hugh is explaining how deeper meanings are beneath the surface expressions of Scripture, and how the theologian should get to them.

It’s quintessentially medieval because (1) It presupposes that Scripture is the source of ultimate truth, (2) it presupposes that the church has gotten the main things right and her teachers know how to teach it (“the rule of sound faith”), (3) It anatomizes an idea down to all its logical permutations, and (4) it’s two-thirds a direct quotation from Augustine.

The divine deeper meaning can never be absurd, never false. Although in the sense, as has been said, many things are found to disagree, the deeper meaning admits no contradiction, is always harmonious, always true. Sometimes there is a single deeper meaning for a single expression; sometimes there are several deeper meanings for a single expression; sometimes there is a single deeper meaning for several expressions; sometimes there are several deeper meanings for several expressions. “When, therefore, we read the Divine Books, in such a great multitude of true concepts elicited from a few words and fortified by the sound rule of the catholic faith, let us prefer above all what it seems certain that the man we are reading thought. But if this is not evident, let us certainly prefer what the circumstances of the writing do not disallow and what is consonant with sound faith. But if even the circumstances of the writing cannot be explored and examined, let us at least prefer only what sound faith prescribes. For it is one thing not to see what the writer himself thought, another to stray from the rule of piety. If both these things are avoided, the harvest of the reader is a perfect one. But if both cannot be avoided, then, even though the will of the writer may be doubtful, it is not useless to have elicited a deeper meaning consonant with sound faith.” “So too, if regarding matters which are obscure and farthest removed from our comprehension, we read some of the Divine Writings and find them susceptible, in sound faith, to many different meanings, let us not plunge ourselves into headlong assertion of any one of these meanings, so that if the truth is perhaps more carefully opened up and destroys that meaning, we are overthrown; for so we should be battling not for the thought of the Divine Scriptures but for our own thought, and this in such a way that we wished the thought of the Scriptures to be identical with our own, whereas we ought rather to wish our thought identical with that of the Scriptures.” (Didascalion, Book 6, ch. 11)