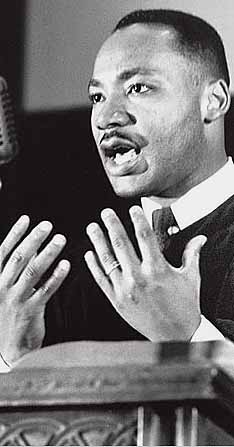 As a Federal holiday, MLK Day falls on the third Monday of January, which is a different date every year. But today, January 15, is the actual anniversary of his birth.

“I Have A Dream” is overwhelmingly his most famous speech, just as the “Letter from a Birmingham Jail” is his most famous writing. The Dream speech draws much of its power from the fact that although it is a secular speech about the life of all Americans, delivered in a secular setting, it nevertheless crosses the line into Christian preaching and proclamation. In his political rhetoric, King was constantly appealing to biblical categories like the kingdom of God, the image of God, and absolute standards of right and wrong established by God. To grasp what he is doing when he unleashes the power of religious language to make moral arguments about national policy, it is helpful to hear how he talks when he is actually preaching on a Biblical text, from a pulpit in a church.

There are plenty of examples of King’s sermons available and published in his works. Many of them are remarkable; at least one ends with an altar call (“We open the doors of the church now. If someone needs to accept Christ, (Yes, sir) this is a marvelous opportunity, a great moment to make a decision. And as we sing together, we bid you come at this time by Christian experience, baptism, watch care. But come at this moment, become a part of this great Christian fellowship and accept Christ (Yes, sir) as your personal savior.)”

An MLK altar call! Never mind that the theology behind King’s sermons was the theology of high liberalism; the point is that he brought Christian theology, and religious rhetorical appeals, from his church life into the political arena.

“Yes, sir,” says someone in the audience. Throughout some of his sermons, the congregation encourages him on in that responsive style that is part of the black church culture and heritage. The best encouragement interjected by the audience members into the sermons: “Make it plain!” Every preacher should have somebody shouting this at them about five times per sermon.

Perhaps the boldest of Martin Luther King’s sermonic moves is Paul’s Letter to American Christians, in which, after a brief introduction, King delivers the entire message as if reading a letter written by Paul. He flags the letter as “imaginary” right at the beginning, but then starts inviting the congregation into the game, talking about how it is postmarked “from Ephesus,” and how he has struggled for weeks to translate it from its original Greek.

Risky? Impious? Doomed to failure? I know I wouldn’t want to try to write words that would sound right coming from the apostle Paul! But good preaching is a kind of prophetic connection between the revealed truth of God’s word, and our current situation. So King ventured to speak as Paul, in an effort to “make it plain.”

The sermon was delivered at Dexter Avenue Baptist Church, Montgomery, Alabama, on 4 November 1956. It’s worth reading in full, as King chastens capitalism but demolishes communism; scourges Protestants and rebukes Catholics; excoriates the opponents of civil rights and then counsels the defenders of civil rights about how to resist spiritual pride.

Here are a few of the best paragraphs:

Americans I must urge you to get rid of every aspect of segregation. The broad universalism standing at the center of the gospel makes both the theory and practice of segregation morally unjustifiable. Segregation is a blatant denial of the unity which we all have in Christ. It substitutes an “I-it” relationship for the “I-thou” relationship. The segregator relegates the segregated to the status of a thing rather than elevate him to the status of a person. The underlying philosophy of Christianity is diametrically opposed to the underlying philosophy of segregation, and all the dialectics of the logicians cannot make them lie down together.

But even more Americans, you may give your goods to feed the poor. You may give great gifts to charity. You may tower high in philanthropy. But if you have not love it means nothing. You may even give your body to be burned, and die the death of a martyr. Your spilt blood may be a symbol of honor for generations yet unborn, and thousands may praise you as history’s supreme hero. But even so, if you have not love your blood was spilt in vain. You must come to see that it is possible for a man to be self-centered in his self-denial and self-righteous in his self-sacrifice. He may be generous in order to feed his ego and pious in order to feed his pride. Man has the tragic capacity to relegate a heightening virtue to a tragic vice. Without love benevolence becomes egotism, and martyrdom becomes spiritual pride.

So the greatest of all virtues is love. It is here that we find the true meaning of the Christian faith. This is at bottom the meaning of the cross. The great event on Calvary signifies more than a meaningless drama that took place on the stage of history. It is a telescope through which we look out into the long vista of eternity and see the love of God breaking forth into time. It is an eternal reminder to a power drunk generation that love is most durable power in the world, and that it is at bottom the heartbeat of the moral cosmos. Only through achieving this love can you expect to matriculate into the university of eternal life.