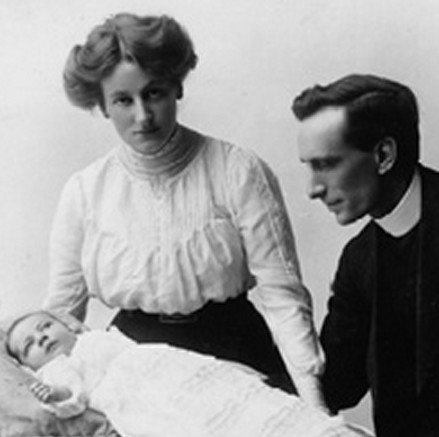 Oswald Chambers (1874-1917) is remembered for one devotional book, My Utmost for His Highest, which was published, like all but one of his 30 books, posthumously by his widow Biddie. Biddie was a stenographer who captured Oswald’s spoken ministry and, after his death, turned her notes into volumes of publishable writing. In 1935 she published Utmost, a selection of short, daily readings. A true bestseller, it has been in print ever since, and now exists in just about any form you could want: cheap paperback, frilly gilded perfumed gift editions, electronic, RSS, large print, interleaved with blank journal pages, audio recordings, and even an updated version with more modernized language.

The name of the book is odd. It is an allusion to the Victorian painter G. F. Watts, who summed up his idealism in the personal motto “The utmost for the highest.” When Chambers quoted this motto, he acknowledged that it was a watchword of personal sacrifice for noble ideals, and that many young men who had died on the battlefield had sealed their loyalty to that aspiration with their blood. Chambers had been a YMCA chaplain to troops who went on to fight in the debacle that was the battle of Gallipoli, so he had some knowledge of such sacrifice. But when he took Watts’ phrase into his own writing, Chambers emphasized that “the highest human love has nothing to do with religious faith,” and that even the upward striving of high idealism needed to be chastened by the specificity of the one true God, who is not just the abstract “highest,” but somebody in particular. So he tweaked the motto to “My Utmost for His Highest,” and Biddie took that as the title for his most enduring book. It was an attitude he applied to all his work. He often asked, “In my study am I a woolgatherer, or like a man looking for his Lord?” God is great; we should strive for him with the best that is in us.

That Chambers would be drawn to the motto of a famous painter makes sense. His first training was in the visual arts, and as a young man he wrote, “My life work, as I see it… is to strike for the redemption of the Aesthetic Kingdom –Music and Art and Poetry– or rather the proving of Christ’s redemption of it.” Chambers grew up in a household thick with Christianity: His father, a Baptist pastor, had been baptized under Spurgeon’s ministry, and his mother had formerly belonged to Edward Irving’s unusual church. No doubt Chambers thought he could take a Christian foundation for granted, and could move forward to advance the cause of Christ in the arts. As he worked out his sense of vocation, however, it seemed to him that he could not simply presuppose the direct ministry of the Word. What his work might have been if he had followed through on the instinct for “the redemption of the Aesthetic Kingdom” we will never know, but the power of his teaching ministry, which he carried out with the attitude of a hard-working artist or poet, is evident.

My Utmost is a strong book, best taken in the prescribed daily doses. I once heard a connoisseur of devotional books say that Streams in the Desert was the well of comfort, but My Utmost for His Highest was the fire of motivation. Like any book that applies the fire to you, My Utmost can begin to seem legalistic, but more exposure to Oswald Chambers’ writings (Discovery House has produced a 1500-page Complete Works –maybe a bit much for all but the serious fan!) makes it clear that he understood the gospel of free forgiveness.

Oswald Chambers had some profound personal experiences with God in the course of his short life (he died at age 43). But he never preached experience, either his own or that of his readers. He is constantly warning against the sticky fly-paper of a past experience, the way it can arrest your attention and so come between you and the presence of Christ in his word. Attending to one’s own past spiritual experiences produces a merely reminiscent faith, and attending to one’s current spiritual experiences produces a morbidly psychologized faith that, perhaps paradoxically, stops hearing the voice of God in the present. J. E. Fison, bishop of Salisbury, put it this way:

There is guidance for all Evangelicals in this avoiding of both Scylla of trust in ‘feelings’ and also the Charybdis of self-deception in ‘kidding yourself’ into believing that something has happened to you, just because of some Bible text, when all the evidence is to the contrary –a tragic error which seems to be the Evangelical counterpart of the Jesuit excaecatio.