Today is the day we commemorate Patrick of Ireland, an amazing missionary who accomplished so much, and has been so beloved down through the ages that vast quantities of legendary material have stuck to him. I don’t want to get into the arguments about whether he really used a shamrock to explain the Trinity, whether there were really 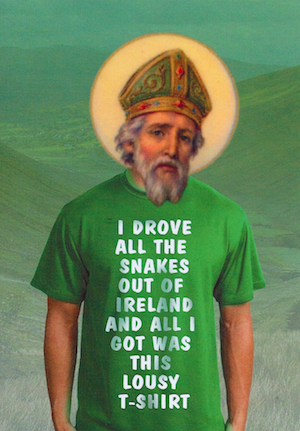 any snakes for him to chase out of Ireland, whether he had anything to do with that great “I bind unto myself today the strong name of the Trinity” prayer. Historians agree broadly on two things: (1) there’s a real, important, and impressive historical core to all things Patricky, and (2) most of your favorite things about Patrick don’t belong to it. For instance, did you know he never drank green beer?

But here’s part of the solid core: His autobiographical Confession, and the theology contained in it. My favorite, most trinitarian parts are below. Patrick habitually apologized for his lack of education. He was, after all, herding sheep and being kidnapped by pirates (true!) during those leisurely years when young folk get liberal educations. But his trinitarian theology is strikingly robust, especially in its affirmation of the eternal Sonship of Christ:

There is no other God, and never has there been, or will be, save the Lord, the unbegotten Father, without Beginning, from whom is all Beginning: for by Him have been made all things, visible and invisible who has begotten a Son consubstantial with Himself, made man, drawn back to heaven to the Father when death was overcome. And to Him He gave all power over every name in heaven and earth and hell, so that every tongue should confess that the Lord Jesus Christ is in the glory of God the Father:

Him we believe, and we expect His speedy coming as judge of the living and the dead, who will repay to each one according to his works : and He has poured into us, in its fulness, the gift of the Holy Spirit and the pledge of immortality. Who makes believers and subjects to be the sons of God the Father, whom we confess and adore, one God in the Trinity of the most holy name;

. . . Without any doubt, in that day we shall arise in the brightness of the Son, that is, in the glory of Jesus Christ, and, all redeemed, we shall be, as it were, the sons of God and co-heirs of Christ, and made like to His image in the future. For from Him, and by Him, and in Him, are all things: to Him be glory for ever. Amen.

Verily, in Him we are to reign; for that sun which we look upon, at His command rises daily for our sakes; but it will never reign, neither will its splendour last. Moreover, all those unhappy ones who adore it shall end miserably in tortures. But we believe and adore the true Sun, Jesus Christ, who will never fail, neither shall he who does His will, but for ever he shall stand, as Christ stands for ever, who, with God the Father Omnipotent and the Holy Spirit, reigns before all time, and now and for ever. Amen.