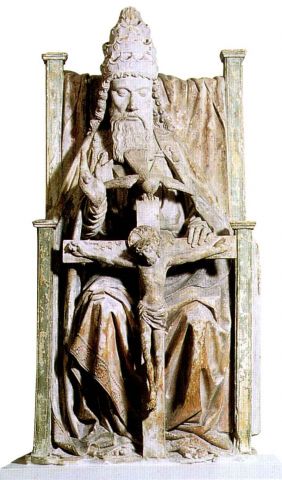 The San Francisco Palace of the Legion of Honor is an art museum with a notable sculpture collection. It is most famous for its seventy works by Auguste Rodin, the greatest set of Rodin sculptures anywhere in the world besides the actual Musee Rodin. But the city’s collection of medieval art is also housed here, and one of the finest pieces –my personal favorite– is a limestone statue depicting the Trinity. It’s five feet tall, and was made in France in the late 1400s. It used to be colorfully painted, but the centuries have worn away the paint and left mostly just the natural stone coloring. If you look closely, you can still pick out some greens, blues, and reds in different sections.

It is an image of the Trinity, made up of two sub-images. The first and largest image is God the Father seated on the throne, wearing a three-layered crown and making a traditional gesture of blessing with his right hand. When you first walk into the room with this sculpture, you are likely to identify the statue at a glance as simply a representation of God enthroned. But the second image quickly impresses itself on you: the crucified Christ stretched out on the cross. 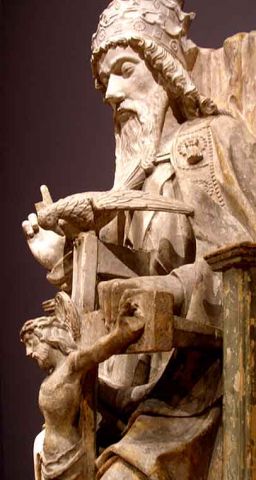 These are the two images that merge together to make this one statue: God on the throne, Christ on the cross. Simply combining those two images would be enough to make this statue a powerful visual statement. I dare you to make a more concise image of sovereignty and sympathy.

But there’s more to be seen here. Father and Son are linked by the Holy Spirit in the form of a dove who descends from the Father and alights on the top of the cross. He spreads out his wings (echoing the cross beam and, more movingly, the son’s extended arms) and pitches forward, his head bent solicitously over the head of Jesus. His presence is what makes this an image of the Trinity rather than merely a sharp juxtaposing of God Seated On High and God Brought Low. Though the dove of the Spirit is not the first thing to catch anyone’s eye, the sculptor has chosen to make him a rather large bird. If you compare him to the Father, he’s about the right proportion from man to bird; but if you compare him to Jesus, he is gigantic. The dove’s monumentality and posture hold the image together in a very helpful way: without the avian symbol of the Spirit, the difference in scale between the Father and the Son might suggest a grown man holding a crucified doll. But the sculptor uses several tricks (the dove, the drapery, the strong verticals of throne and cross) to give the opposite impression. This is not a man holding a diminutive crucifix, but a full-sized crucifixion image placed in front of an image of the Father which is staggeringly huge. If Jesus is read as life-size, that makes the Father impossibly large, too large for the room, all-encompassing. Even when I see this image in person, I have to remind myself its total height is only five feet.

The piece is extremely well proportioned, laid out with clear lines and neatly nested symmetries. In fact, the artist shrewdly places the Father a bit off center in order to relieve the strict geometry of the throne and cross. 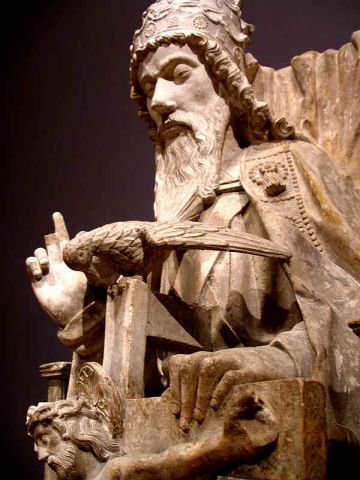 There are heights and depths in this piece, but the visual zone where everything comes together is the center where we can see in one glance the head of Christ, the hands of the Father, and the dove of the Spirit. The figure of Jesus, bearing the side wound which signifies his deadness, must have experienced such god-forsakenness in the crucifixion –you don’t get much more godforsaken than crucified. But what we get to see here is the hand of the Father gripping the beam of the cross and the dove of the Spirit clutching and covering it. In a gesture usually seen in depictions of the last judgment, the one on the throne has salvation in his right hand and a curse in his left: Here, it is the Father’s left hand which holds the cross, as his right hand is raised to bless.

The anonymous sculptor who carved this was a medieval Bezalel, “filled with the Spirit of God, with ability and intelligence, with knowledge and all craftsmanship, to devise artistic designs… in cutting stones for setting, and in carving wood, to work in every craft.” He was theologically astute, and he knew how to handle limestone. 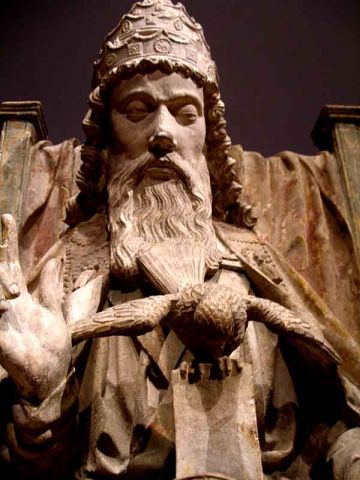 A few things have been lost from the sculpture (the Son’s fingers are mostly missing), but this sculptor (or workshop) built a statue to last. Even the most delicate bits of carving are sculpted in deep relief from a very solid background. And this sculptor also enjoyed a challenge: He has the dove of the Spirit emerging from the beard of the Father, which required him to turn one piece of stone into two un-stony textures: hair and feathers. Try chiseling that out of limestone someday and see how you do. But a challenge like that is all in a day’s work for an artist who has risen to the high vocation of explaining, through his visual understanding, the depth of God’s love and the ultimate significance of the cross of Christ.