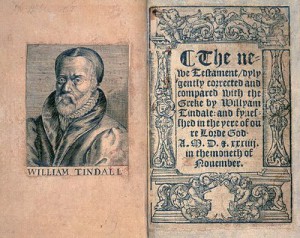 Today (October 6) is the day the martyrdom of William Tyndale in 1536 is commemorated.

Tyndale changed the world with a revolutionary Bible translation that moved straight from the original languages into English with no Latin middle-man. The very words of Scripture were thus unleashed to conduct their own sovereign interrogation of the sixteenth-century church. At the beginning of his career, Tyndale warned a learned man, “If God spare my life, ere many years I will cause a boy that driveth the plough shall know more of the Scripture than thou dost.” God spared his life for enough years that he equipped a lot of ploughboys.

My favorite Tyndale biography, by David Daniell, argues that Tyndale was one of the major forces to give the English language its expressive range and cadences. Some kind of linguistic synergy happened when Tyndale asked what those Greek and Hebrew sentences would sound like if he put them straight into English. On page after page of Tyndale’s translation, he discovered and invented ways that the English language was an exquisite receptor language for the Biblical languages.

One of the major changes he made to English “as she is spoke” was to pick up a lot of the Anglo-Saxon root words. Staring at a Hebrew word, he didn’t ask himself what Latin word that would sound like, but what English word. English (after 1066 and all that) is well stocked with Latin-based words, but also with a hoard of Anglo-Saxon words. Tyndale didn’t have a system for this, but he did have freedom to choose. As a result, says Daniell, “Tyndale transmitted an English strength which is the opposite of Latin, seen in the difference between ‘high’ and ‘elevated’, ‘gift’ and ‘donation’, ‘many’ and ‘multitudinous’.”

If you think you’ve never read Tyndale’s New Testament, you’re only part right. According to Daniell, 90% of the King James Version follows Tyndale’s decisions verbatim. So he didn’t produce the best-seller, but he did most of the work that made it possible. We are all downstream from Tyndale’s influence, and only with a concerted, intentional effort could any English-Bible reader shake himself free of it.

His achievement, however, is the paradoxical one of trying to take middle-men out of the way, including himself. What he tried to do was to put the Bible directly into the hands of the ploughboys, so they could read it for themselves. Time after time, he made translation decisions that would drive English readers to seek answers in the Bible itself when they wanted further understanding about the Bible. He tried to undermine the system that led people to look first to commentators and authoritative explanations. He believed that Scripture interprets Scripture, the clear passages illuminating the obscure passages, and he produced a translation on that principle.

In his preface, he says, “Mark the plain and manifest places of the scriptures, and in doubtful places, see thou add no interpretation contrary to them: but (as Paul saith) let all be conformable and agreeing to the faith.” Daniell adds, “There is strikingly no reference to the Church, to what the pope, the bishops or the priests teach; nor to the ceremonies of the Church as necessities for salvation; nor to the tomes of casuistry erected on each syllable of Scripture down the centuries; nor to the element, taught as essential, of doing good works, especially in giving money to priests, monks and friars. All you need is this New Testament and a believing heart.”

Tyndale was eventually sentenced to execution, not so much for the act of translating as for the act of teaching what the religious authorities (including, prominently, Henry VIII) called heresy. That heresy was the act of bypassing external authorities. Before Tyndale, anybody who heard the Bible read or explained in English would hear all about priests, going to confession, doing penance, and performing works of charity. These medieval formulations were presented, not simply as the right interpretation of Scripture, but as the very words of Scripture. The New Testament explained in English in the fifteenth century directed people to do penance and submit to priests. Tyndale’s Bible scraped away all of those linguistic accretions and restored the words of Scripture: repent, submit to elders, acknowledge your sins. The linguistic details are complex (and Tyndale fought them out with Erasmus and especially Thomas More in great detail), but Daniell summarizes the difference that Tyndale made:

Thus Tyndale is not being perverse in translating the New Testament word for the Christian minister, presbuteros, as ‘senior’, reserving ‘priest’ for the occasional Greek iereus, the Jewish religious official. In Greek, a presbuteros is ‘a more senior man’ –it is the comparative of the word for an old man. (In 1534, Tyndale changed his reading to ‘elder’.) The group of Christians together, called by the New Testament ekklesia, he calls, correctly, a ‘congregation’: the Greek word means ‘an assembly’, ultimately those called together by the town crier. Congregatio had been used by Erasmus in his parallel Latin translation for the Greek ekklesia wherever it occurred. Tyndale avoids ‘church’ because it is not what the New Testament says. The Greek verb metanoeo means, precisely, ‘repent’, that is turn the mind, and so Tyndale gives ‘repent’, and not ‘do penance’. The Greek verb exomologeo has a primary sense of ‘acknowledge, admit’, and ‘acknowledge’ is what Tyndale usually prints, rather than ‘confess’. The Greek word agape is one of several words for ‘love’, so Tyndale prints ‘love’ (as in 1 Corinthians 13) and not ‘charity’. In other words, he is making the New Testament refer inwardly to itself, as he instructs his readers to do, and not outwardly to the enormous secondary construction of late-mediaeval practices of the Church: priests and penance and confession and charity. Interpretation, as he explains in the second paragraph of the epilogue, has to be so that ‘all is conformable and agreeing to the faith’ of the New Testament. He cannot possibly have been unaware that those words in particular undercut the entire sacramental structure of the thousand-year Church throughout Europe, Asia and north Africa. It was the Greek New Testament that was doing the undercutting.