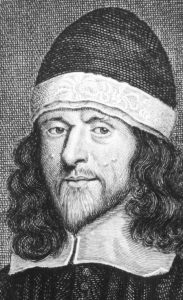 Puritan theology makes a very helpful distinction between union and communion: “Union is the foundation of communion,” says Sibbes. A union is an underlying oneness of some kind, but communion is an ongoing set of  responses, actions, habits, and disciplines by which fellowship is cultivated and maintained. John Owen describes their relation this way: “Communion is the mutual communication of such good things as wherein the persons holding that communion are delighted, bottomed upon some union between them.” Whenever we talk about spiritual experience, or (in modern idiom) of a relationship with God, we are talking about communion; we should also maintain a lively sense of how that relationship is “bottomed upon” a foundation of union.

Many of the Puritans use the union/communion distinction in their spiritual theology, either to explore union with Christ and the communion that arises from it (Sibbes), or communion with the Trinity based on justification and adoption (Owen). Theologians interested in spiritual experience are always going to talk a lot about communion; the Puritan distinction enabled them to keep that personal, practical, experiential domain firmly located against the horizon of the grand, objective doctrines of the Christian faith.

But Thomas Goodwin got even more out of the distinction by applying it to God. Goodwin used the distinction between union and communion in his doctrine of the Trinity proper. In his book The Knowledge of God the Father and His Son Jesus Christ (Works, vol. 4), Goodwin pressed it into service for interesting ends. He used it to explore the difference between the union of the three persons and their communion. Their union is ineffable and absolute; we might describe it in terms of the oneness of the divine nature and the fact that the three persons equally possess that nature. “There is not only this superior union of the three persons,” though; Goodwin goes on: “there is also a supreme and independent communion between those persons in the Godhead, having an entire abstracted converse among themselves, and incommunicable to any mere creature.” That communion, based on that union, is a set of interpersonal actions in the divine life. Goodwin has a list of seven things in which this communion, “which they had one with another from all eternity,” consists:

If you’ve read any Goodwin (and if not, dear reader, why are you reading a blog instead? Tolle lege!), you’ll know that he has plenty to say about each of those seven points. He spends five or six pages  (365-370) describing these mutual interactions, and it is a rich series of descriptions, engaging scriptural usage extensively. For anything like it in recent literature, I can only think of Kevin Vanhoozer’s section on God’s light, life, and love in Remythologizing Theology.

One of the things Goodwin gains by distinguishing union and communion in God is a thicker description of the unity of the Triune God. Without compromising his commitment to divine simplicity, Goodwin finds layers and layers of interpersonal connectedness in the unity of the Trinity. It enables him to redescribe the divine interpersonal unity in the categories of life, interest, enjoyment, knowledge, communication, delight, and blessedness.¹ There is scope here for the imagination (to quote the theologian St. Anne of Green Gables) to engage but not to overreach.

The distinction is in such a characteristically Puritan idiom that it doesn’t at first seem to map very well onto more classical distinctions in Trinitarian theology. But here’s how I think it aligns: The seven things identified by Goodwin as elements of the Trinitarian communion are aspects of perichoresis, the mutual in-being of the three persons in each other. Considered as a Puritan inflection of perichoresis, Trinitarian communion has a decidedly personalist edge. But it also has a solid metaphysical foundation, always “bottomed on” the unity of the divine nature. Too often, modern appeal to perichoresis has seemed like an attempted end-run around the metaphysical oneness of God, as if a doctrine of divine unity could be a late arrival to bind up Trinitarian monotheism after the fact. Goodwin’s account of Trinitarian union and communion works precisely the other way; as such it is a salutary alternative framework for perichoresis.

But I think Goodwin’s distinction functions differently than either the essential/relational predication rule or the internal/external works rule. The main difference is that the actions of Trinitarian communion do not distinguish the persons from each other: they are all mutual, common, and reciprocal. As such you cannot use them to distinguish the persons. But relational predication (Father of Son; Son of Father) and internal works (begetting and proceeding) serve precisely to distinguish the persons from each other. No doubt we could take up any of Goodwin’s aspects of Trinitarian communion and describe it non-reversibly. When he says their communion consists in “the mutual interest, or propriety, which they have in the things of each other,” we could gloss that as “the Father has a paternal interest in the things of the Son, and Son a filial interest in the things of the Father,” and so on for the Spirit. For all I know, Goodwin may even do this somewhere –there’s a lot of Goodwin to read! But those precisions are not the point of his distinction. The point of describing Trinitarian communion is to describe a rich mutuality and reciprocity, arising from and bottomed on a union. This life of communion does not clash with the relations of origin, but it is not simply reinscribing them either.

¹Much further along this line and Goodwin would be describing the interpersonal Trinitarian communion as a form of dance. And why not? There’s no rule against that, if he handled it with characteristic good judgment. Strictly ballroom I’m guessing, but who knows?