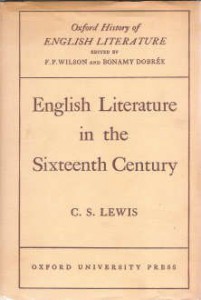 C.S. Lewis’ biggest book, English Literature in the Sixteenth Century, runs to nearly 700 pages. It has one 45-page chapter with the title (I am not joking here) “Drab and Transitional Prose,” full of quotations and learned discussions of authors nobody has ever heard of (Harpsfield, Starkey, Bullein, Peacham, Tilney… who?). It’s a hard book to get through.

But Alan Jacobs has declared it “the greatest of all of Lewis’ books,” and “a great masterpiece of literary and intellectual history.” And though Alan Jacobs is an English prof who was bound to love Lewis’ most English-proffy book, he is nevertheless probably right. This is Lewis doing what he was best at, what he spent most of his mental life preparing for, what he is absolutely expert in. I admit I haven’t read the whole book, but it’s an easy book to skip around in.

“The best part of the book is its long introduction,” says Jacobs, right again. In this chapter, titled “New Learning and New Ignorance,” Lewis pulls an “everything you know is wrong” maneuver, hauling out just the right bits of evidence to make the reader re-examine all sorts of presuppositions about the middle ages, the renaissance, and the Protestant movement. It’s that last bit I want to quote at length here.

Lewis wants to sort out Anglican and Puritan authors for us, but first he has to clear some cluttered ground. “Neither,” he warns, “can be understood apart from the original Protestant experience in which both were rooted, though puritanism more exclusively. To that experience I must now turn.” (p. 32)

“We want, above all, to know what it felt like to be an early Protestant,” he says. Lewis’ strength as a scholar was his uncanny power of making himself at home in the distant past, and then speaking form that perspective to the modern world, describing what things looked like to him. He described himself as a dinosaur, and invited his colleagues to study him as primary evidence of antique times. His most famous performances of this “The Past is a Nice Place, Wish You Were Here” routine were his rehabilitation of medieval cosmology, allegorism, and romance. But in a few key paragraphs of this book, we get to see him doing the same trick with the first Protestants.

So what did it feel like “to be an early Protestant?” Well, here is what it did not feel like:

One thing is certain. It felt very unlike being a ‘puritan’ such as we meet in nineteenth-century fiction. Dickens’s Mrs. Clennam, trying to expiate her early sin by a long life of voluntary gloom, was doing exactly what the first Protestants would have forbidden her to do. They would have thought her whole conception of expiation papistical. On the Protestant view one could not, and by God’s mercy need not, expiate one’s sins.

The real key to Protestantism, says Lewis, is the theology of Paul. The entire movement was sparked by “either a recovery, or a development, or an exaggeration (it is not for the literary historian to say which) of Pauline theology.”

In the mind of a Tyndale or Luther, as in the mind of St. Paul himself, this theology was by no means an intellectual construction made in the interests of speculative thought. It springs directly out of a highly specialized religious experience; and all its affirmations, when separated from that context, become meaningless or else mean the opposite of what was intended.

To do justice to this original spark of Protestant theology, Lewis compares it to every radical transformation he can think of: waking from a nightmare, falling in love, getting a gift you could never have deserved. This is the key to the Protestant insight, according to Lewis, and here is the long quote which is the real reason I’m making this blog post:

Propositions originally framed with the sole purpose of praising the Divine compassion as boundless, hardly credible, and utterly gratuitous, build up, when extrapolated and systematized, into something that sounds not unlike devil-worship. The experience is that of catastrophic conversion. The man who has passed through it feels like one who has waked from nightmare into ecstasy. Like an accepted lover, he feels that he has done nothing, and never could have done anything, to deserve such astonishing happiness. Never again can he ‘crow from the dunghill of desert.’

All the initiative has been on God’s side; all has been free, unbounded grace. And all will continue to be free, unbounded grace. His own puny and ridiculous efforts would be as helpless to retain the joy as they would have been to achieve it in the first place. Fortunately they need not. Bliss is not for sale, cannot be earned. ‘Works’ have no ‘merit’, though of course faith, inevitably, even unconsciously, flows out into works of love at once. He is not saved because he does works of love: he does works of love because he is saved.

It is faith alone that has saved him: faith bestowed by sheer gift. From this buoyant humility, this farewell to the self with all its good resolutions, anxiety, scruples, and motive-scratchings, all the Protestant doctrines originally sprang.

For it must be clearly understood that they were at first doctrines not of terror but of joy and hope: indeed, more than hope, fruition, for as Tyndale says, the converted man is already tasting eternal life. The doctrine of predestination, says the XVIIth Article, is ‘full of sweet, pleasant and unspeakable comfort to godly persons’.

But what of ungodly persons? Inside the original experience no such question arises. There are no generalizations. We are not building a system.

When we begin to do so, very troublesome problems and very dark solutions will appear. But these horrors, so familiar to the modern reader (and especially to the modern reader of fiction), are only by-products of the new theology. They are astonishingly absent from the thought of the first Protestants. Relief and buoyancy are the characteristic notes. In a single sentence of the Tischreden [Table Talk] Luther tosses the question aside for ever. Do you doubt whether you are elected to salvation? Then say your prayers, man, and you may conclude that you are. It is as easy as that.

I would have said some of that a bit differently (especially the devil-worship bit, or the connotations of “not building a system”). But I couldn’t have said it that well in the first place, so it’s best to let Lewis have his say. He is attempting to channel the first Protestants, and let us catch a glimpse of what it felt like to be them. Let the redeemed of the Lord say so.