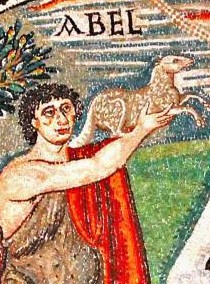 In Charles Simeon’s sermon on Hebrews 11:4, “Abel’s  Offering Instructive to Us,” he explores the meaning of Abel’s sacrifice: compared to Cain’s, it was an admission of guilt and a confession of the need for salvation. The offering of Cain could have been given in Eden before the fall, but the death of a firstborn shows an awareness of the consequences of sin.

Charles Simeon’s preaching always showed his genius for getting to the heart of the gospel from any passage of scripture, without doing violence to the context. His multi-volume Horae Homileticae, sermon outlines on the whole canon of Scripture, is the fruit of his fifty-year preaching ministry and a gift to the church. These wonderful outlines are available in many places, but the easiest way to sample a few is to use the indexed version at studylight.org. Whatever book of the Bible you’re studying right now, dip into Simeon’s Horae and watch him draw out the most important things.

At the end of his sermon on Abel, Simeon says “there is one thing not yet noticed in our text, which deserves particular attention, and which will serve us for an APPLICATION of the subject to our souls.” What he has in mind is the line “Abel, though dead, yet speaketh to us.”

From this verse, Simeon ventures to give a full and elaborate paraphrase of what Abel says to us by his faith.

“Hear then Abel as now speaking to you from the dead,” says Simeon:

‘Brethren, though dead, I yet live; and though I have been dead almost six thousand years, I would speak to you as though I had died but yesterday.

I am concerned that you should profit by my experience. You are all assembled to worship and serve your God: and you are ready to conceive, that on that account you are all rendering unto God an acceptable service.

But I must declare to you that this is far from being the case. Your outward forms, considered independently of the frame of mind in which you engage in them, are of no value in the sight of God. You may “kill an ox in sacrifice, and be only as if you slew a man: you may sacrifice a lamb, and be as if you cut off a dog’s neck: you may offer an oblation, and be as if you offered swine’s blood: you may burn incense, and be no more accepted, than if you blessed an idol.”  God looks not at the act, but at the heart: and if that be not right with him, your sacrifices, how costly soever they may be, are only “an abomination to him.”

Of all this you may be assured from what is related concerning my brother Cain and myself. He, as you have been told, was not accepted, whilst I was honored with tokens of God’s merciful approbation. What was it that made the difference? Why did God look on me with complacency, and with abhorrence on him? It was because I approached him as a sinner, whose hopes were founded solely on the sacrifice of his Son, whilst my brother approached him without any such exercise of repentance and faith. And so it is with you. On those who draw nigh to him with a broken and contrite spirit, and with their eyes fixed on the Lamb of God to take away their sins, he looks with delight: he will even give to them sweet tokens of his acceptance, and testimonies of his love: and, if he do not give the same visible demonstrations of his love to them, as he did to me, he will not leave them without witness even in the minds of their enemies: for he will so enrich their souls by his grace, as shall make it evident, that God is with them of a truth. But on the proud self-righteous formalist he will look with scorn and indignation. Yes, to those of you who have come up hither merely to perform a duty which custom has prescribed, he says, “Ye hypocrites, in vain do ye worship me, seeing that, whilst you draw nigh to me with your mouths, and honour me with your lips, your hearts are far from me .”

I warn you then not to deceive your own souls: for assuredly, whether ye will believe it or not, God will ere long make the same distinction between you that he did between me and Cain: the contrite and believing worshipers shall have a testimony of his approbation before the whole assembled universe; but the impenitent and unbelieving shall be marked out as monuments of his everlasting displeasure.

As for you who worship him in faith, he may for the present leave you in the hands of the ungodly, who from envy may be incensed against you; he may even suffer your “greatest enemies to be those of your own household;” yea, he may leave you even to be put to death, and to suffer martyrdom for your fidelity to him. But let not that deter you from confessing him openly before men.

I have never regretted the sufferings I endured for him; nor will you ever regret any thing which you may be called to sustain. Even the testimony which you shall now enjoy in your own conscience, shall be an ample recompense for all: what then shall that testimony in the day of judgment be, when he shall say, “Well done, good and faithful servants, enter ye into the joy of your Lord?”

Go on then without fear, and “hold fast the profession of your faith without wavering.” “Be faithful unto death; and he will give you a crown of life.”