Reading in modern liberal theology, you begin to notice some recurring themes. Especially when liberal theologians get around to describing God, they tend to emphasize a few characteristics. You find these pervasive patterns of thought: that God is deeply mysterious, but is always opposed to oppression; that God is intimately and immanently near to us, affirms matter in all its materiality, and is genuinely, deeply moved in the core of his being by all that affects us. Different authors say all of this differently, and it’s hard to name what they all have in common. But I’ve come to think of it as human FLIRSHing. Which is a silly mis-spelling of flourishing.

Human flourishing has become the criterion for assessing the doctrine of God in modern liberal theologies. When the doctrine of God comes in for revisionist treatment, it is usually being subjected to the demands of human experience. The description of God is being re-worked so that it will function better at making humans better. Theology throughout the past century undertook a number of reconstructive efforts to conceptualize a God who, far from stifling human flourishing, instead serves as the very possibility and guarantee of flourishing. The God depicted by classical theism is judged to be an idol. Such a God (infinite, self-existent, incorporeal, eternal, immutable, impassible, simple, perfect, omniscient, omnipotent), moderns say, is not only unworthy of human worship, but a barrier to human fulfillment. 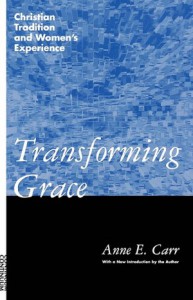 This impulse is ubiquitous in revisionist liberal theology. To name names would be to write out a bibliography of contemporary liberalism. For a very clear and straightforward argument in favor of this way of doing theology, though, it’s hard to beat the old book by Anne E. Carr. Carr (1934 – 2008), was a Roman Catholic theologian who taught at the University of Chicago, and her most influential book was Transforming Grace: Christian Tradition and Women’s Experience (San Francisco: Harper & Row, 1988). It was widely used as a theology textbook (especially among liberal Roman Catholics) and was translated into German, Italian, French, and Portuguese. Much of the book is specifically devoted to a feminist theological project, and can’t easily be generalized to cover wider trends. But when she reflected more broadly on theological method, Carr made a classic statement of the revisionist or liberal motive. On pp. 148-157 of Transforming Grace, Carr described six concepts which characterized this twentieth-century reconstruction of the doctrine of God. Carr described God as liberating, incarnational, relational, suffering, future, and hidden.

When I read these pages in Carr, I immediately recognized that she had named the modern liberal project perfectly. When I teach on the movement, I rearrange the six characteristics so their initial letters fall into a mnemonically helpful order, spelling FLIRSH, which kind of sounds like “flourish,” to emphasize that the basic concern of this general movement is to find a God-concept that enables people to live fully human lives. Carr’s own order is LIRSFH, which follows a better systematic structure: LIRSFH progresses through four categories of immanence (L-I-R-S) to two categories of transcendence (F-H). Carr was a gifted teacher and a gracious writer; if you have to study liberals, invest your time with the best ones. But I tweaked the order to help me retain all six points: FLIRSH.

Here are brief descriptions of the characteristics of the God that moderns think will make them flirsh, that is, flourish:

God is FUTURE: When divine transcendence must be discussed, it is cast in terms of futurity: God is ahead rather than above; Wholly New rather than Wholly Other; the absolute future that guarantees human freedom, rather than the primal all-determining origin that precludes it. Theologies of hope started this turn to the Resurrection paradigm and its categories of hope, promise, the not-yet, and an open future of possibilities. This God is not an existent being who intervenes from outside of history, but the God who is to come, who will transform human history in and through our freedom and responsibility.

God is LIBERATING: Latin American Liberation Theology and black theology lead the way in describing God as the God of the Exodus, whose mighty acts of deliverance take the form of empowering humans to become persons, subjects, responsible agents in their own histories. This God wills justice rather than suffering, and is on the side of the poor, favoring the oppressed, the marginalized, the outcast. The notion of God as liberating guarantees that in striving together for justice we are not working alone; God in fact somehow waits on and works through our human work in solidarity with each other.

God is INCARNATIONAL: New implications are being drawn from the doctrine of the Son’s incarnation: it declares that God is by nature incarnational, and further, that there can be no fundamental or ultimate dualism (mind/body, spirit/matter, or any other) that separates God and the world. Incarnation manifests and guarantees the sacramentality of all creation, and indicates that God and the world, far from being competitors, are cooperating with each other on the basis of God’s gracious self-gift to the world. Since God’s power is always expressed through Christ, –and this means through the human and the natural– divine power and human autonomy cannot be seen as opposites.

God is RELATIONAL: Process theology leads the way in arguing for a God-concept in which relations are not accidental and external, but real and constitutive; in which God and the world are intrinsically related (cf. “dipolar God” and panentheism). At issue here is the concept of divine power: persuasive power replaces coercive power in this model, as God waits for human cooperation rather than intervening. This recasts the question of theodicy. An essentially relational God is a changing God, responding to novelty and initiative from the human covenant partner.

God is SUFFERING: Since “only the suffering God can help,” (Bonhoeffer) it’s a good thing that God is “the fellow-sufferer who understands” (Whitehead). God does not passively watch the world’s pain from afar, but participates in it. This way of speaking is obviously metaphorical and mysterious, but it can be as evocative as the symbol of the cross. Kitamori and Moltmann led the way in developing this idea, and it has passed into common parlance, although it is open to a wide variety of conflicting meanings.

God is HIDDEN: unknown and mysterious, an incomprehensible enigma that always surpasses human formulations and symbols. Revelation does not deliver God over to us as a known quantity. The unknown God is unavailable to us, but we work through analogical language to “name towards God.” The highest point and most concrete exposition of divine mystery is the affirmation of God as Trinity: this doctrine has come to indicate that God is incomprehensibly social, a community or perichoresis of persons.

Thus God as the guarantor of human flourishing embodies mutuality, reciprocity, cooperation, unity, and peace in diversity: this God is deemed worthy of imitation and worship by modern liberal theology.

There is some truth to be found in each of the six characteristics to be found above. In combination, though, they do align to depict a God whose profile is hard to trace in Scripture. Much is missing, everything’s a bit off balance. The reason, I think, can be glimpsed in the methodology: the quest for a guarantor of human flourishing is no way to arrive at a doctrine of God. Christian theologians ought to behave, instead, as if we had received a revelation.