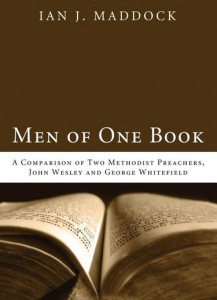 George Whitefield and John Wesley, the two titans of the evangelical awakening of the eighteenth century, are not paired often enough. The people who write about them or quote them tend to be strongly attracted to one and averse to the other. As a result, most assessments of the two men have a tendency to use a “hermeneutics of admiration” for their favorite, and a felt need to downplay the other.

But in a new book on W&W, Ian J. Maddock succeeds in treating them with real evenhandedness and equanimity. Men of One Book: A Comparison of Two Methodist Preachers, John Wesley and George Whitefield (Wipf & Stock, 2011) does a good job comparing and contrasting the ministries of the two men without making a case for one over the other. If Maddock has a favorite, I can’t tell who it is. Maddock breaks through the “Wesley have I loved, but Whitefield have I hated” (or vice versa) syndrome.

The result is a book that is helpful and thought-provoking, because these two men do need to be understood together. The key example, for me, was the comparison between Wesley and Whitefield on evangelism and discipleship. Whitefield took the lead in itinerant evangelizing: He went further, and spoke to more people in more places, than Wesley. It was Whitefield (ten years younger than John Wesley) who began open-air preaching. As one historian said, “he was the first who ever burst into that silent sea, and was converted while the two Wesleys were still fast bound in sin and nature’s night, and he was the one great evangelist to share in the Revival as it embraced America, Wales, Scotland, and England.”

Wesley also joined in Whitefield’s work of going to new towns and preaching the gospel. Though not as dramatic an orator as Whitefield, Wesley was a famously effective preacher. But he lamented to his co-workers in 1743 the “terrible instances” of those “half-awakened and then left to themselves to fall asleep again.” He saw early that a serious program of discipleship, accountability, and spiritual formation needed to be put in place wherever the gospel was preached to nominal Christians. He solemnly vowed, “by the grace of God, not to strike one stroke in any place where I cannot follow the blow.”

About twenty years into the evangelical awakening, Wesley reflected,

I was more convinced than ever that the preaching like an apostle, without joining together those that are awakened and training them up in the ways of God, is only begetting children for the murderer. How much preaching there has been for these twenty years all over Pembrokeshire! But no regular societies, no discipline, no order or connection. And the consequence is that nine in ten of the once awakened are now faster asleep than ever.

John Wesley wrote to his brother Charles in the early days of the revival (1741), “I must go round and glean after G. Whitefield,” but I’m not sure that was a complaint. Even as they grew to disagree with each other quite sharply over theological issues like predestination and perfection, Wesley and Whitefield maintained a profound sense of cooperation and collaboration. If Whitefield did a broader and sloppier harvesting work, Wesley was well suited to the gathering and gleaning. Maddock, not giving preferential treatment to either man, is able to highlight how each of them was true to his own gifts and calling. Whitefield “preached to vast congregations and then moved on, hoping that, having sown the seed, others would come to reap the harvest… Wesley’s strategy was one of concentration on various centres and groups of people,” especially in centers like London, Bristol, and Newcastle in the early days of the revival.

The observation is not new. Historian Kenneth Cragg said that “wherever Whitefield went, he left an overwhelming impression of impassioned eloquence. Wherever Wesley went, he left a company of men and women closely knit together in a common life.” But by putting it this way, Cragg ran the risk of praising Wesley and dismissing Whitefield. Maddock, quoting this line from Cragg, cries foul. Then he goes on to give patient attention to the historical details (Whitefield’s major impact came from making the most of emerging opportunities to travel and to network with nobility; Wesley’s Methodist bands were regionally focused in a way that still helps make sense of the spiritual landscape of the UK). It’s easy enough for armchair evangelists in our day to say “no evangelism without discipleship,” but both Whitefield and Wesley were breaking through the barrier of an age and a culture that had decisively declared, “no evangelism, period.” Both of their emphases were needed.

Maddock’s evenhandedness makes several other contributions to understanding the awakening. Whitefield and Wesley both pursued a “preach and print” strategy with their sermons which multiplied their labors tremendously. And the best chapter in the book is probably chapter four, a comparison of the “use, interpretation, and application” of the Bible in the printed works of the two men. It’s a rich chapter that deserves close study. Men of One Book is a bit too dissertationy in its tone of voice at times, and would have benefited from closer editing (the subjects and verbs often disagrees with each other in number). But it’s an informative discussion of an important and neglected subject, and Maddock succeeds in what he set out to do.