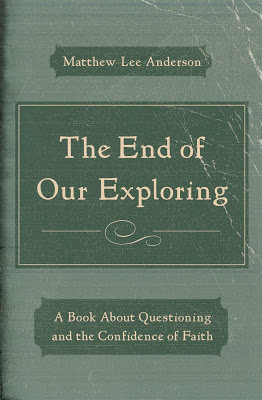 I’m so glad to see this new book by Matt Anderson: The End of Our Exploring: A Book About Questioning and the Confidence of Faith.

Anderson may be most in his element as a frontline blogger, elevating the discourse in his corner of the internet with astute writing and exceptional judgement about which topics to address and which to ignore. But his first book, 2011’s  Earthen Vessels, showed how much Anderson can accomplish with a couple hundred pages, still intervening and editorializing on current cultural trends but also giving himself the space to frame the overall discussion the way he wants to. When I reviewed Earthen Vessels, I said it was “Paul’s theology of Christian experience, but undercover” as a book about vampires, cremation, and yoga. So it’s great to see Anderson stretch out again and put the urgent issues of the day in a broader perspective, not just taking them as they come but re-orienting them, letting them arise and be considered in a more helpful sequence.

The End of Our Exploring is a fairly quick read, but I’m guessing most of its readers will want to return to certain favorite chapters for deeper reflection. Each of the ten chapters (plus a couple of appendices) is well planned and coherent in itself, and each is carefully enough crafted to support a nearly devotional reading, that is, reading for meditation and personal application.

I’m not pretending to be writing a critical review of the book here, partly because Matt’s a friend and former student, and partly because I already blurbed the book in print, so why feign neutrality or non-endorsement?

Here’s the verbiage of my blurbiage of The End of Our Exploring:

Matt Anderson has questions. But he also has answers. But he also has questions about those answers, and answers about where our questions come from, where they take us, what they reveal and conceal, how they work, what kind of people we questioners are, and what our questioning is for. Open your mind for this book the way you would open your hands for a gift, so you can grab onto something solid at last.

The best thing about this book on questions is that it takes questioning so seriously. Anderson defends the process of questioning from at least two kinds of opponents who, from opposite perspectives, devalue it.

On the one side is the kind of person or community that thinks answers, especially religious and theological answers, crowd out all the room for questioning.  This book seeks to woo that audience by showing “The Liberation of Questioning,” (chapter 6). Skillful questioning can set you free from defensiveness (“defensiveness isn’t confidence, even though it often mimics it”), from self-sufficiency (“When the answer of our justification is given to us in Christ, we still learn and inquire and grow. But we can let go of the burden of imitating omniscience…”), and from shallow curiosity (“Curiosity stays on the surface of things.  The moment the unknown becomes known, it is ready to move on”).  It’s a lovely chapter that persuades by showing the benefits of a lifestyle of posing questions to others, to the world, to God, and authentically waiting for real answers.

Anderson’s opening gambit in this chapter is risky: he puts himself forward an example of someone who learned how to ask good questions. Riskier still, he puts the spotlight on himself as a high school student in a scene from youth group. The youth pastor asserts a doctrinal point about the Holy Spirit (that his personal ministry did not begin until Pentecost), and our hero, The Earnest Young Questioner, steps forward to inquire how that can be true if David pleads with God back in Psalm 51, “take not thy Holy Spirit from me?” The youth leader immediately cuts off the question and the questioner: “With a sharp tone, he abruptly told me to go ask my father, who was the senior pastor. And then he moved on. But the moment left a mark.”

Poor, sincere, high school Anderson, merely seeking to understand; crushed by authoritarian Bible teacher armed with answers that are not to be examined too closely. “Two things were strikingly clear: he had no idea how to answer my question and he clearly felt it was a challenge to his authority.”

Just when you think The End of Our Exploring is about to take a strange turn into a self-congratulatory portrait of earnest, intrepid, young questioners everywhere, starring the author, it takes an even stranger turn. It questions authority, sure sure sure, but it pushes right on through and begins questioning the questioner.  Why did Matt Anderson want to know about that detail of pneumatology, and what was behind his asking? And what was his relationship with that big, mean youth pastor?

“Until that point in our relationship,” Anderson admits, “most of my questions had stemmed from my desire to woo pretty girls who loved Jesus by demonstrating my keen biblical insight.” It’s easy to see how this Psalm 51 question fits that profile. Anderson insists that in this instance, he was not similarly motivated –at least not consciously. He was actually experiencing confusion over two ideas that needed to be reconciled with each other. “It was quite possibly the only real question I asked in all my high school years,” but at least with hindsight Anderson can see why it was interpreted otherwise. The situation begins to take on a more complex tone.

“Growing up,” he admits, “my questions were frequently motivated not by an interest in the answer per se but by my eagerness to impress. And, to be candid, I worry that many of them still are.” And with that last verb he jumps from his high school self to his current, authorial self: “Having recently returned to school for a graduate degree, I have been simultaneously terrified and fascinated by how easily my ambition, rather than my desire for understanding in itself, motivates my pursuits.”

What has happened here –and it happens repeatedly throughout the book, though without the autobiographical element– is that Anderson has opened up the process of questioning and revealed that it is not a neutral tool to be employed by invincible seekers of truth. If questioning is a tool, it is a uniquely self-involving one, an instrument that brings its user fully into the encounter, whether the user is aware of it or not.

Our questions are inseparable from our histories. They don’t simply float above us, angel-like in the ether. They are tied to the stories of our lives like the habits and practices of thought that have formed us. We have this particular interest in part because we were formed in that particular way. Had I not been (happily) raised in a biblically literate household, the question never would have occurred to me. And had I not earned for myself a reputation of being pretentious, I suspect my youth pastor might not have been so curt.

It’s this fundamental insight into the seriousness of inquiry that makes The End of Our Exploring a defense of questioning not only against those who tend to be dogmatically answer-oriented, but equally against those who pride themselves on being the questioners.

The fact is that there is just too much cheap questioning going on among the bright young things in the contemporary church, perhaps especially in the evangelical subcultures. But the problem is not in the questioning; it’s in the cheapness. To riff on Bonhoeffer, we might say “Cheap questioning is the deadly enemy of the truth. We are fighting today for costly questioning.”

Questions are not just missiles to be catapulted at authority structures by guerrilla warriors hiding in the jungle of anonymous objectivity. Real questions carry the questioner with them. That accounts, by the way, for why the questions put to Christianity by internal critics are so much more searching than those put by its external critics and opponents: faith asks the hard questions, and knows itself to be implicated in the answers. Unbelief also deserves answers, but in our day it lobs too many pseudo-questions to be permanently damaging.

Anderson exposes cheap questioning for what it is, a shallow and manipulative technique which, if embraced as a lifestyle, is even more damning than dogmatism because more smug and self-righteous (“I thank thee, God, that I am not like those unquestioning dogmatists”). In that precise sense, The End of Our Exploring is an existential book, a book that is not about some topic out there to be dispassionately considered, but about the reader in a way that demands self-examination.

An implication of this, by the way, for those who are watching Matt Anderson’s trajectory as a thinker, is that The End of Our Exploring is a further stage along the way of his exploration of the Christian doctrine of humanity. It’s more theological anthropology, in other words, which is a rich topic that I’m glad to see someone like Anderson investigating in so many unpredictable ways.

Summer is over, and parents and pastors may have missed the chance to send students off to college with this book already in their luggage. But this is a perfect time to get the book into the hands of students who are experiencing a whole new level of learning how to seek and find the truth by questioning. The appendices (“How Not to Lose Your Faith in a Chrisitan College” and “Loving Those Who Leave”) make explicit what much of the book suggests more obliquely: The End of Our Exploring: A Book About Questioning and the Confidence of Faith is designed to help a rising generation of thoughtful believers to navigate a minefield of self-deception, to trust God, and to fear no questions.