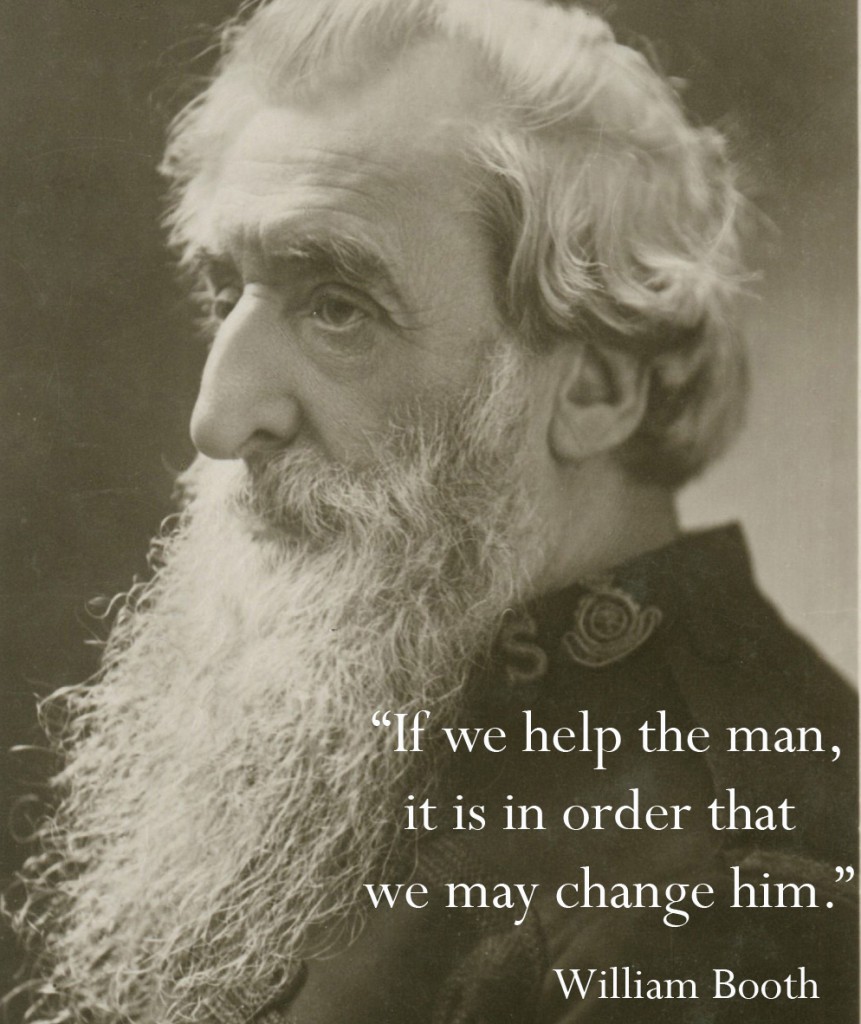 William Booth (born today, April 10, 1829; died 1912) came out of nowhere, or out of “darkest England” as he called it, and did more good in one lifetime than could reasonably be expected from one man, even a man with so remarkable a wife as his Catherine.

In 1890 Henry Morton Stanley thrilled England with his book In Darkest Africa, describing the miseries of the pagan Congo. Playing on that title, William Booth published his description of how pagan his own homeland was: In Darkest England, and the Way Out. He had already, in 1877, published Heathen England and What To Do For It, but Darkest England was a clearer call for action. Booth’s gospel ministry had always included social action, but now he was recommending much more sweeping and strategic political program. It was an expansion of his work, but no departure:

I have no intention to depart in the smallest degree from the main principles on which I have acted in the past. My only hope for the permanent deliverance of mankind from misery, either in this world or the next, is the regeneration or remaking of the individual by the power of the Holy Ghost through Jesus Christ. But in providing for the relief of temporal misery I reckon that I am only making it easy where it is now difficult, and possible where it is now all but impossible, for men and women to find their way to the Cross of our Lord Jesus Christ.

Booth was a man of action, but he had visions and published them. When American poet Vachel Lindsay (1879–1931) heard of his death in 1912, he wrote this strange anthem, later set to stranger music by composer Charles Ives:

Booth died blind and still by Faith he trod,
Eyes still dazzled by the ways of God.
Booth led boldly, and he looked the chief,
Eagle countenance in sharp relief,
Beard a-flying, air of high command
Unabated in that holy land.

Jesus came from out the court-house door,
Stretched his hands above the passing poor.
Booth saw not, but led his queer ones there
Round and round the mighty court-house square.
Yet in an instant all that blear review
Marched on spotless, clad in raiment new.
The lame were straightened, withered limbs uncurled
And blind eyes opened on a new, sweet world.

Drabs and vixens in a flash made whole!
Gone was the weasel-head, the snout, the jowl!
Sages and sibyls now, and athletes clean,
Rulers of empires and of forests green!

And when Booth halted by the curb for prayer
He saw his Master thro’ the flag-filled air.
Christ came gently with a robe and crown
For Booth the soldier, while the throng knelt down.
He saw King Jesus. They were face to face,
And he knelt a-weeping in that holy place.
Are you washed in the blood of the Lamb?