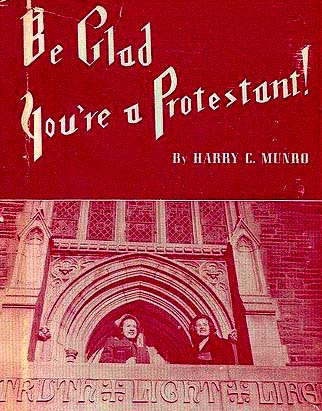 Last Friday, the estimable Peter Leithart posted a little manifesto in his column space at First Things,. declaring “The End of Protestantism.”

I didn’t like the piece at all. In fact, for a moment I entertained the theory that somebody had hacked his account and posted a satire. Leithart is after all one of a handful of contemporary theologians who actually writes with a personal style, with a voice that could be imitated. And this piece just seemed too over the top, badly considered, and hastily dashed off to be real Leithart.  There’s even –horrors!– a typo in it! I decided it was the real Leithart, but not his best work. Having profited greatly from his writing over the years, I figured it was my duty to “cover the nakedness of the fathers” and not draw undue attention to this rare, poor performance.

But the piece got passed around social media, and I started getting e-mail. Some hailed it as a rallying cry that gave voice to their own inarticulate longings, others were troubled and knew they should disagree but couldn’t quite figure out how or why. I took a swat at the piece on Twitter. Friends asked me to say more. Then Jamie Smith poked fun at me for not saying more. Then Peter Leithart asked me to say more. Okay, already. The original post was only 840 words, so I’ll try to respect the medium and keep this shortish. The original was also a bit of a puckish provocation, so I’ll do my best to show that I didn’t miss the joke altogether.

This is all certainly deplorable. Where shall we find men of such denominational ressentiment? Mostly in “the local Baptist or Bible church,” but also among “conservative Presbyterians.” Leithart deplores a few other things, like preaching in a suit and tie instead of vestments, and a low sacramentology, but let’s stick for a moment to the historical outline of the portrait. Leithart calls us away from that kind of small-minded, knee-jerk, unimaginative, amnesiac man of ressentiment, and conjures instead something free and fully realized. He calls it Reformational Catholicism, and builds up its portrait in bright, not to say self-congratulatory, colors, in contrast to the dark tones he has just used.

To put it this way is to point out that the essay labors under an inconsistency between its message and its method. You don’t beat the man of ressentiment by resenting him harder. And this “End of Protestantism” essay has a  squint, a stoop, a cramp, a kink in the hose. It deplores more than it deploys. The spring in its engine is the decision to turn the word “Protestant” into a term of abuse, and use it as a label to catch all the mockery directed at the know-nothings depicted above. I’m not sure who that’s supposed to help. It seems likely to quench the smoking flax of any actual Protestant interest in the great tradition.

The comments section below the piece is, predictably, a tangled bank of confusions. Among the Anglicans saying “I think we’ve got what you’re looking for, it’s not a new idea” and the Roman Catholics saying “you’re half right, keep talking,” there is the occasional note of perplexity:  “I’m wondering just what the names of ‘Reformational Catholic’ churches are. Where should I go to worship with these people?” One of the confusing bits is that all those churches are likely to have the word “Protestant” in their names, but this is an essay calling for everybody to bail out of the Protestant ship.

The most misleading thing in the essay is that it is a massive act of catastrophic silencing, covering over the witness of the Reformers and their heirs. Leithart leaps over the 16th, 17th, and 18th centuries of confessional Protestant theology and spirituality, suggesting that there’s nothing there worth investigating. For the purposes of this essay, he’s constructed a new dark ages, though a shorter one and a more recent one. On the far side of the chasm is something called Patristic and Medieval Land; and on this side is an anti-Catholic bigot serving the Lord’s Supper in a Mickey Mouse T-shirt. But there’s nothing between them, so choose you this day.

The way this essay is set up reminds me of an awkward stage some of my undergraduates go through. They come to Biola from good families and good churches, and we give them, along with all the Bible instruction, a truckload of Irenaeus, Athanasius, Nazianzus, Augustine, Anselm, Aquinas, and Dante. They read it, wrestle with it, come to love much of it, and then at some point in the sophomore year they look up and ask, “Why don’t Protestants read any of this great stuff?”

Trying to avoid that gobsmacked look, I sometimes ask, “By ‘Protestant,’ do you mean your high school youth group?” Sometimes they admit that’s what they mean.

Sometimes a student will ask, “why don’t any Protestants recite the creeds?”

I don’t get exasperated. I get pretty excited that I get to be the person who throws open the doors to the vast resources of historic Protestant theology. Come on in, kids, and explore a lost culture: your own! Start with Billy Graham and R. A. Torrey and read your way backwards into the Victorians and the Puritans. Check out the Protestant Scholastics who knew Aristotle by heart. Meet the Methodist revival, run almost exclusively by Anglicans at first. Try to follow Martin Chemnitz as he engages Cyril of Alexandria on the hypostatic union. Watch Calvin’s mastery of the church fathers, and see him refuse to yield the patristic case to Sadoleto. See if you can figure out what strange mystical spot Luther is reading the Bible from.  Explore the hinterland of the soul. All things are yours, and you are Christ’s, and Christ is God’s.

What bothers me about “The End of Protestantism” is that it gives people like this the message that the trailhead to the great heritage cannot be picked up in their own church. The trailhead must be in some other church or denomination. Leithart’s unfortunate language effaces all signs of the trailhead, covers the tracks that we could follow back, demands a leap. The face of Luther glowers ambiguously from the top of the page, but we are assured that there are “unplumbed depths in Scripture, never dreamt of by Luther and Calvin.” I expect this kind of dismissiveness from someone who hasn’t spent any time reading the exegesis of Luther and Calvin. But I always assume Leithart’s read everything, so I boggle at his false dichotomy between the Reformers and the ancient church.

Leithart gives one final hint that he knows better than the post suggests. He ends with the sentence, “It’s time to turn the protest against Protestantism and to envision a new way of being heirs of the Reformation, a new way that happens to conform to the original Catholic vision of the Reformers.” Wise readers will pick up on the tiny clue here, that the whole point of actual Protestantism (when it’s not having a new meaning forced on it as a term of abuse) is to claim the full heritage of the church while making necessary adjustments in recent deviations.

But, to conclude, this essay is simply misconceived, so the trouble starts immediately. The first two sentences invite readers to join the author in a private definition of a word already in use to mean something else. The third and fourth sentences (about English Evangelicals being antithetical to the Church of England) can’t stand up to Gerald Bray politely raising his hand and voting “present” in the comments section. The fifth sentence (“What I’m calling “Protestantism” does the same with Roman Catholicism.”) admits investing a word with a new, private meaning, and uses scare quotes to do so, thereby making itself inconsistent with the rhetorical pitch of the full article. The sixth sentence (and a few later ones) seems to trade on a bogus etymology of the word Protestant, that imagines it to be about protesting.

A little over a year ago, in an essay about how nobody should take any of his arguments to mean that a Roman Catholic or Eastern Orthodox exit door was the right solution to any problems,  Leithart wrote about what he called “my Protestantism, my reformed catholicity.” I’m going to continue assuming he means the same things today. “My Protestantism – better, reformed catholicity – is not fundamentally anti-.  It’s pro-, pro-church, pro-ecumenism, pro-unity, pro-One Body of the One Lord.  It’s not that I’m too anti-Catholic to be Catholic.  I’m too catholic to be Catholic.” I believe Leithart’s “reformed catholicity” (the capitals and the -isms aren’t bringing a lot of clarity, it seems to me) is fundamentally pro-. But in the convoluted case of “The End of Protestantism,” two anti-s didn’t make a pro-.