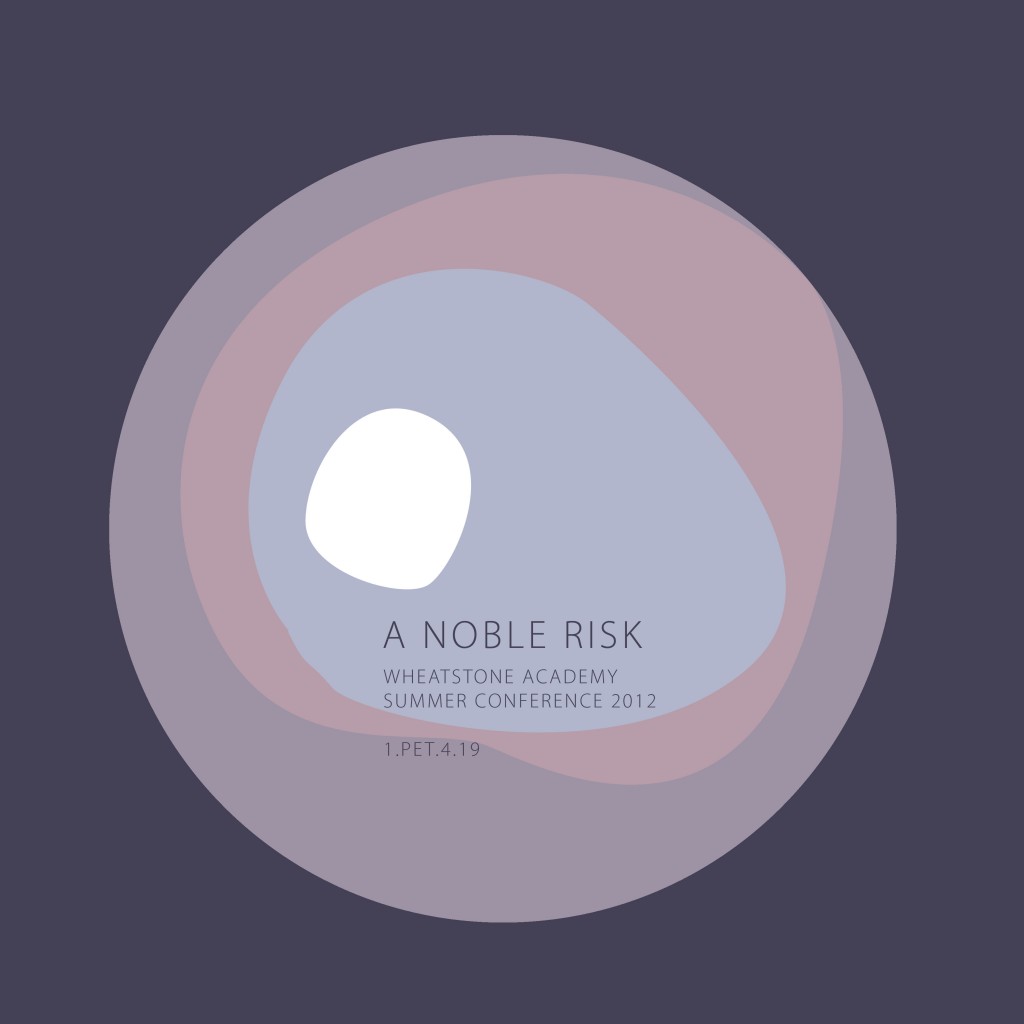 Wherefore let them that suffer according to the will of God commit the keeping of their souls to him in well doing, as unto a faithful Creator.  1 Peter 4:19

No sensible man would insist that these things are as I have described them, but I think it is fitting for a man to risk the belief—for the risk is a noble one—that this, or something like this, is true about our souls and their dwelling places, since the soul is evidently immortal, and a man should repeat this to himself as if it were an incantation, which is why I have been prolonging my tale.  Phaedo 115d

What you’re about to read:

You may have heard that I run the single best program for Christian youth in the United States today. People do say things. I love this job. It’s incomparably rewarding, and always exciting. And one of its most exciting parts is the hard work of distilling the many, varied elements of a Wheatstone conference into one meaningful, novel, and potent theme. I love laying all the pieces of a Wheatstone week on a table – films and art and lectures and games and (of course) our two main texts – and staring at them long and hard enough to find a key that unlocks each one, and that locks them all together. That key for this year’s conference is A Noble Risk. It’s the theme that connects our tshirts to our tirades, our dialogues to our dinners – everything to everything else. But it especially connects our two main texts, Plato’s Phaedo and 1 Peter.

It hasn’t been our habit to say much about Wheatstone conference themes before participants arrive. We strive to maintain the bit of mystery that keeps them exploring our big ideas when they get here. But this year I’ve tried to write an introduction to A Noble Risk that gives a framework for exploring the conference theme, while still inspiring more questions than it answers. It’s a meditation on the ideas expressed in the two quotations above – ideas about goodness, hope, suffering, death, and everlasting life. Take a peek below, and get a taste for what Wheatstone conference participants will be exploring in July.

Goodness is simple, but it isn’t clear. It doesn’t have the immediate force or apprehensibility of the things around us–chairs, trees, faces–nor of the things inside us–desires, fears, appetites. Sometimes, someplaces, for some reason, some people can see it clearly. Often, we think we see it clearly, but are wrong–we’ve mistaken goodness for something that is similar to it. And even when it is clear, we see it through dark glasses, or through scales, like the Apostle Paul. Someday goodness will be clear, like faces and fears are. Now, here, it isn’t clear. It’s risky.

Goodness is simple, but it isn’t easy. It doesn’t have the liquid nonchalance of eating when you’re hungry, nor of running when you’re scared. Sometimes, someplaces, for some reason, some people can be good easily. Often, we think we are being good, but are wrong–we are behaving well because of fear or pride, or for selfish reasons. And even when it is easy, its ease sits in the context of a world that’s bending away from God’s true lines. Someday goodness will be easy, like laughing after a joke is. Now, here, it isn’t easy. It’s risky.

Looking before death, goodness doesn’t guarantee benefits. It doesn’t guard from harm. You might not be safe or sane or well at ease, even if you’re good. You might not laugh. You might just die. End. Yes, you might succeed and flourish. Yes, you should want beneficial things. But you can’t depend on goodness to get them for you. It’s not directly, immediately connected to any marvelous treats. It’s risky.

It isn’t clear that it is worthwhile to be good, looking before death. It’s hard to tell what it is, and it’s hard to do things that we do know are good. And after we work hard to do a thing that it was hard to understand in the first place, we might not get any discernible benefits from it. That’s why the question, “Why should I be good?” has been valid and powerful for as long as we’ve poked around outside of Eden. Without the idea of some ultimate payoff for good behavior after death, it’s pretty easy to think you shouldn’t worry about it. Just make do, then die.

But that’s also why people who know that it’s worthwhile to be good have been taking a pretty big risk for a really long time: they’ve believed that, after death, goodness will be made worthwhile somehow. In Phaedo, Socrates suggests (roughly) that believing in a time after death where all confusions and injustices will be cleared up is so important and so desirable that it would be worth doing hard, hard thinking through a whole long life to figure it out. He says that he wishes that God would send a message saying that it’s true. He says that he would run anywhere to get that message. He’s desperate to hear it because he knows that his belief in the value of philosophy and virtue is risky, and he wants to know that his risk is worthwhile. He wants to ground his righteousness in a tangible hope–in this case, in heaven.

Now, there are compelling reasons for people to be good that would be true even if humans die and that’s it, but they’re really tricky to come up with, and they frequently disagree with each other, sometimes drastically. Socrates knows a bunch of those arguments (add The Republic to your reading list if you’re interested in exploring them), but still, in Phaedo, at the end of his life, he’s searching. He’s taking a risk and believing that virtue will pay off in the end. He chooses to believe in the thing that will keep him pursuing goodness relentlessly, even when it’s risky. Goodness is, for him, good enough reason to throw hope out into the future, to lay a line of belief past death, into the middle of humanity’s ending unknown. His goodness demands hope. Hope past death is his noble risk. It grows out of his virtue, and then nourishes it.

He opens his letter to Christian believers, scattered by persecution, with a thrilling vision of the glory of Jesus’ return, and of the benefits they’ll receive from it. This hope of glory is rooted in their identification, through love, with Christ’s resurrection. He points to the glory of that event, and of the present ministry of the Spirit, as evidence of how much more glorious “the revelation of Christ” will be. It’s only later, after fixing this hope in his readers’ minds, that Peter uses it to demand that they live good lives, and, to make his point even clearer, to place that demand for goodness squarely in the middle of some of his readers’ most difficult life circumstances: subjection to an antagonistic emperor, enslavement to cruel masters, or marriage to unbelievers. He believes that, no matter what circumstances Christians may experience, hoping in Christ necessitates behaving like he does. Hope in the immortal Christ demands a righteousness that will risk suffering or death, because it’s a righteousness that reaches past them into Christ’s immortality.

Socrates and Peter have these things right: that hope and virtue require each other, and that you can’t have either without taking a serious risk. But, in Socrates’ words, it’s a noble risk. It’s a risk that allows you to stand up straight and look life clean in the eyes, secure. It’s a risk that lifts you out of brokenness and points you toward what’s whole.

Peter and Socrates also teach us that goodness and hope and death are more important and more expansive ideas than the ones we’re used to. Goodness isn’t simply something that we muster up now, clutching fists and knitting foreheads. It’s something that places us on a particular path–a path that’s either pointless, or one that points past death. It’s more like a story than like physical energy, and you have to believe in its “happily ever after.”

Hope isn’t just wishful thinking, a forward glancing sigh. It isn’t just a ball we toss out into the future. When we reach out toward a potent hope, that hope reaches back and pulls us firmly in its direction, along a very particular path. Any future we hope for isn’t passive at all. It makes immediate, important demands on our everyday living. In a sense, the future comes behind us and pushes us forward by means of our hope in it.

Death is the testing ground for hope and virtue. It makes goodness look foolish, and it challenges hope. It’s opaque. If we didn’t have someone to die and come back from death’s dark other end to tell us about it, we’d have no idea what to expect. Death is a bastion for despair, and it’s the hard, solid line that keeps virtue and hope necessarily linked. It demands attention; no one can look away from it forever. It’s strong.

The things you’ll see and hear and read this week will point you back to this theme. Look around and you’ll see supernovae and chrysalises because they’re natural images of the explosive glory we hope for after death. You’ll hear music that expresses longing or transformative resurrection. The books you’ll read will probe the theme deeply and honestly. The games you’ll play may have rules that imitate our big ideas. Look everywhere, because we’ve probably buried meanings that are meant for you to find.

Don’t know how? Here’s a place to start. Look: the image on the conference tshirts and on this book’s cover is an abstracted supernova, and it’s also an abstracted picture of a light source that’s looked at through foggy layers. It expresses both the beautiful hope of glory, and our present difficulty in seeing it. It’s expressing both, because they’re meant to go together.