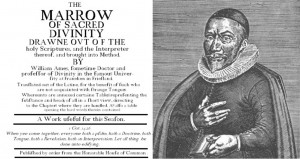 Puritan theologian William Ames (1576-1633) wrote the Medulla Theologiae,  which is available in English as The Marrow of Theology (trans. John Dykstra Eusden). It’s a fine little systematic theology for many reasons. But in this age of Twitter, I’m struck by how Ames chose to express his thought. He wrote out the whole system of doctrine as a series of short, focused, carefully-worded theses.

There are many appropriate ways of writing theology. Sometimes a writer needs to go on at great length. Calvin has some very long paragraphs that start with one topic, shift to another, and then deliver an application at the end along with illustrations. John Wesley wrote some passages that string together a dozen parallel constructions joined by semicolons, alluding to scripture passages from Genesis to Revelation. Karl Barth has some sentences that never did end: they are still going on, best I can tell.

But Ames chose to go short. Not the book itself (the Marrow is about 200 pages), but the theological assertions in it: they are as brief as possible. They range in length from 4 words to about 300, but the majority seem to settle in somewhere around 40 words.

Here are a few of Ames’ brief declarations about theology. The content is solid stuff, but I’m drawn to them especially because of their brevity. They seem definitive, decisive, truculent, ready to put into action. Ames chose his words very carefully, and I’m amazed how much he can communicate with such economy.

I:3.9- The declarations in the Scriptures… are called the objects of faith by metonymy of the adjunct.

I:4.32- What God is no one can perfectly define except one who possesses the mind of God himself. But an imperfect description follows which we can understand and comes close to explaining the nature of God.

I:4.66 – The perfection of God whereby he is called blessed results from all these attributes.

I:5.1 -The subsistence, or proper manner of being of God is his one essence so far as it has personal properties.

I:8.22 -Natural things tend towards God, first, in that they declare God’s glory; second, in that they give occasion for us both to know and seek God; and third, in that they sustain our life that we may live well to God.

I:11.1 – For man there are two things to be considered in the ordering of events: apostasis and anastasis, his fall and restoration.

I:13.2 – Original sin is a habitual deviation of the whole nature of man, or a turning aside from the law of God.

I:17.2 – The propagation of sin has two parts, imputation and real communication.

I:18.17 – The union adds nothing to the divine person and nature except a relationship. But in the human nature it effects a change whereby that nature is elevated to highest perfection…

I:22.22 – The consummation of Christ’s death in conscious realization was the curse whereby he endured the full consciousness of God’s judgment on man’s sin.

I:23.4 – Christ triumphed on the cross as on a field of victory, but in his exaltation as on a king’d throne or triumphal chariot.

I.24.1 – Application is the making effectual, in certain men, of all those things which Christ has done and does as mediator.

I.25.4 – It is called destination because there is a sure determination of the order of means for the end. Because God determined this order by himself before any actual existence of things, it is called not simply destination but predestination.

I:26.1 – The parts of application are two, union with Christ and partaking of the benefits that flow from this union.

I:31.2 – The church is both the subject and an effect of redemption. For it is not first actually a church and later joined in union and communion with Christ; it is the church of Christ because it is united to Christ.

I:34.18 -The articles of faith have grown with the times not in essence but only in explication.

I:35.18 -Ministers impose upon their hearers and altogether forget themselves when they propound a certain text in the beginning as the start of the sermon and then speak many things about or simiply by occasion of the text but for the most part draw nothing out of the text itself.

I:35.21 – A doctrine is a theological principle either in the express words of Scripture or deriving from them as a direct consequence.

I:36.15 – In a sacrament there is something perceptible to the senses and something spiritual. 16 -The former is a sign which represents or applies and the latter is what is represented and applied.

I:40.1 -The sacraments of the New Testament follow from its nature. They are few in number, easy to prepare and observe, and very clear in their meaning.

II:3.6 -To be truly good an action must be referred to God as the chief end, at least in effect.

II:4.1 -Observance consists of either religion or justice.

II:8.7 -The receiving of the word consists of two parts: attention of the mind and intention of will.

II:8.25 -There is something of pride in every sin but especially in those which are committed deliberately.

II:9.1 -Prayer is a devout presentation of our will before God so that he may be, as it were, affected by it.

II:13.1 -Instituted worship is the means ordained by the will of God to exercise and increase natural worship.