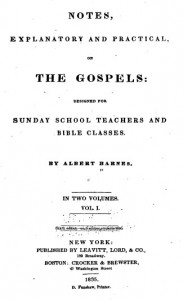 Today (December 24) is the anniversary of the death of Albert Barnes (1798-1870), the American pastor remembered for his popular commentary on the Bible, Barnes’ Notes. Barnes pastored for over 40 years at the First Presbyterian Church of Philadelphia, and generated thousand of pages of commentaries. He has been called “the most prolific commentator of his generation,” and he sold voluminously as well: One million copies were sold by 1920, and the Notes are still in print today (as well as available in digital formats and online in various ways).

Barnes’ Bible commentary began appearing in 1832, with the Notes Explanatory and Practical on the Gospels, Designed for Sunday School Teachers and Bible Classes. Eleven more volumes on the New Testament were next, followed by commentaries on Job, Isaiah, Daniel, and Psalms. (The set was apparently rounded out by the labors of one James Murphy, but I don’t know the details.)

Barnes produced these notes while engaged in full-time pastoral ministry, and his goal was simply to train Sunday School teachers in the right understanding of the Bible, to improve their teaching. Barnes (a Princeton seminary graduate) read the best available commentaries, and then made their conclusions available in a more accessible style:

The design has been to state, with as much brevity and simplicity as possible, the real meaning of the sacred writer; rather the results of critical inquiry… than the process by which those results were reached…. It was my wish to present to Sunday-school teachers a plain and simple explanation of the more common difficulties of the book which it is their province to teach.

Charles Spurgeon recommended Barnes’ notes, calling them “Thoroughly good.” He added, “Using these notes constantly, we are more and.more struck with their value. For the general run of preachers this is probably the best commentary extant.” Elsewhere Spurgeon dug in a bit deeper, admitting that they were uneven (the OT volumes far more helpful than the Gospels), and even warning of some errors in Barnes’ doctrinal judgments (Barnes was New School Presbyterian, with a view of the transmission of original sin that probably differed from Spurgeon’s).

But even as he flags a few problems with Barnes, Spurgeon admits that for books that were only intended as brief helps for Sunday School teachers, Barnes’ Notes are remarkably satisfying works:

Placed by the side of the great masters, Barnes is a lesser light, but taking his work for what it is and professes to be, no minister can afford to be without it, and this is no small praise for works which were only intended for Sunday School teachers.

Spurgeon quotes somebody named Wardlaw as saying, “so far as my examination has gone, I feel confident in pronouncing them to be characterized, in no ordinary degree, by discriminative judgment, sound theology, unostentatious learning, practical wisdom, and evangelical piety.”

In 1858, Barnes preached a sermon about lessons he had learned in his decades of ministry. It was entitled Life at Three-Score. Barnes credits his success in life to religion, staying tee-totally sober, and hard work. He was also an early riser:

Whatever I have accomplished in the way of commentary on the Scriptures is to be traced to the fact of rising at four in the morning, and to the time thus secured which I thought might properly be employed in a work not immediately connected with my pastoral labours… All my commentaries on the Scriptures have been written before nine o’clock in the morning. At the very beginning, now more than thirty years ago, I adopted a resolution to stop writing on these Notes when the clock struck nine. This resolution I have invariably adhered to, not unfrequently finisihing my morning task in the midst of a paragraph, and sometimes even in the midst of a sentence.

Barnes was against slavery (he was born in 1798, so that mattered) and for prohibition (he lived until 1870, so that mattered). At age sixty, he marveled at how technology had changed his world. “I see wonders around me which have sprung up anew,” he said, and then predicted the internet:

A mysterious and incomprehensible network, like spiders’ webs, is weaving itself over all lands, and making its way beneath deep waters, by which thought is transmitted simultaneously to millions of minds, and is diffused over distant lands regardless of mountains and of oceans. How different such a world from what it was sixty years ago!