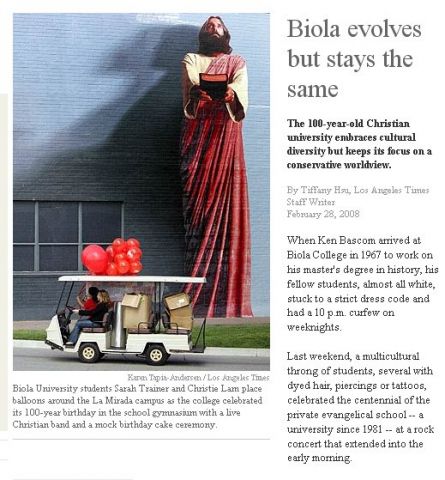 2008 is Biola University’s centennial year, and this week saw the actual birthday. LA Times reporter Tiffany Hsu did a fine write-up of the celebration, and explained to Los Angeles what this Bible Institute-turned-into-a-university thing is all about. I’m quoted briefly. Click on through for the story, or see below.

Biola evolves but stays the same
The 100-year-old Christian university embraces cultural diversity but keeps its focus on a conservative worldview.

When Ken Bascom arrived at Biola College in 1967 to work on his master’s degree in history, his fellow students, almost all white, stuck to a strict dress code and had a 10 p.m. curfew on weeknights.

Last weekend, a multicultural throng of students, several with dyed hair, piercings or tattoos, celebrated the centennial of the private evangelical school — a university since 1981 — at a rock concert that extended into the early morning.

Bascom, 58, now a Biola staff member, joined in the revelry. During the culmination of a year’s worth of festivities at the suburban La Mirada campus, he was feted with his family for the clan’s long history with the school: His grandmother took classes in 1914, as did his grandfather in 1930.

The family has watched as Biola both evolved and stayed the same. It has gone from a Christian adult education center with eight students in 1908 to an institution with satellite campuses throughout the state and in New York City, Ukraine and Thailand.

The grand building that first housed the institute in downtown Los Angeles was demolished years ago, its prominent red neon “Jesus Saves” sign moved. Biola’s well-known radio station, which was founded in 1922 and dominated national Christian airwaves for years, was shut down in the 1980s.

Biola starts its second century on unfamiliar ground, with a new president — the first to be chosen from outside university staff — dealing with concerns about diversity and environmentalism that were nonissues at its founding.

But Biola has stayed constant to its initial purpose of training students to infuse their lives and professions with a conservative Christian worldview, unlike many secular universities founded on similar principles, officials said.

Biola is said to be the only nationally ranked Christian university that requires all students and faculty to be Christian and has a mandatory Bible study curriculum.

“Biola has never had to reinvent itself and disown what’s happened before,” said Fred Sanders, an associate theology professor. “It’s been mostly organic growth.”

Nearly 6,000 students attend Biola, the most in its history, though some officials worry that the number will drop due to declining church attendance nationwide. But for now, they say, Christian colleges are growing fast, and Biola has grown even faster, setting enrollment records every year for 12 years, college officials said.

Biola is nondenominational and has always welcomed male and female students of all nationalities.

But diversity is still a new concern for what was long a homogeneous class of students bred in well-to-do Los Angeles communities, officials said. A position for an associate provost for diversity leadership was added in 2004. Officials hope to recruit more Latino students.

And believing that environmental stewardship is a Christian duty, officials said they have committed to “green” construction guidelines. Biola already has an on-campus power plant.

This year, Biolans have been adjusting to a new, young president: Barry H. Corey, 46, a Boston native. Beloved former President Clyde Cook, the last in a long line of leaders who rose through internal promotion, stepped down in June after a stable 25-year term.

But Cook said he struggled to keep Biola affordable, adding that Corey inherited a hefty fundraising burden. Several buildings are slated for expansion and fees are rising, although state financial aid programs remain stagnant. Biola received $70.5 million in donations in the last three years, but more than 90% of the school’s operating budget depends on tuition.

Corey said he believes Biola has potential for modest growth, but said his focus is on shaping students into “cross-cultural Christians.”

“The issue is how we live between the conviction to stay true to who we are and the courage to not live with our heads in the sand,” Corey said. “It’s not easy.”

The conviction may have remained constant, but the name has changed over time. The Bible Institute of Los Angeles was founded Feb. 25, 1908, by Union Oil Co. head Lyman Stewart as a two- to three-year certificate program for adults. A broader curriculum bloomed after World War II as GIs flooded the school and administrators realized that a liberal arts degree was fast becoming necessary for students to pursue jobs.

The institute became Biola Bible College in 1952. The “Bible” was dropped in 1961 as the school scooped up regional and professional accreditations. Student numbers swelled again as the baby boom hit, and the campus was moved to its current site in 1959.

“First and foremost, I am a child of Christ, and everything else goes from there,” Jones said.

“To be relevant, students need that broader education,” Bascom said. “We’ve been flexible and responsive with the package and methods of delivery, but our values are eternal.”

He is clearly taken with his adopted home. Watching students join in centennial activities in the quad, he said he hoped his three children would someday attend Biola.