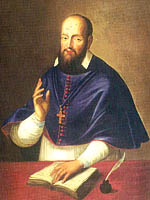 Today (August 21) is the birthday of Francis de Sales (1567-1622). De Sales, regarded as a Saint by the Roman Catholic Church, was the Catholic bishop of Geneva in the early seventeenth century. Think about that phrase for a minute. Obviously, he served as bishop in exile, since Geneva was solid Calvinist territory.

His work was in large part shaped by the necessity of responding to the Protestant Reformation. He did this in two ways: first, he opposed the Reformation very vigorously, arguing forcefully against the leading ideas of its teachers, while hoping that the general populace, sheep deceived by false shepherds, would find their way back to Roman allegiance. De Sales took the conversion of Protestants to be a special charge of his ministry. When he was in his thirties, he even attempted to persuade the venerable old Theodore Beza to recant his Protestant ideas.

Another aspect of De Sales’ work that reflects his historical setting is the way he undertook to reform and clean up the state of his own Roman Catholic church. In his devotional writings, he took care to present the traditional Catholic positions in the most defensible way, protecting them from Protestant criticisms. For example, he defended the use of Latin as the mandatory language of devotion for all the faithful, but he explained how to combine Latin with prayers in the native language:

say your Pater [The Lord’s Prayer] and Credo [The Apostles’s Creed] in Latin; but at the same time learn to comprehend the meaning of the words in your own tongue, that, whilst you say them in the common langauge of the church, you may at the same time relish the admirable and delightful sense of those holy prayers.

Another example: In all his work, De Sales continued to uphold monasticism as the highest peak of true Christian life, but he was more explicit than a lot of late medieval spiritual writers that ordinary Christians could also lead lives of devotion and holiness. He offered his own busy life as a bishop as an example, and exhorted people from all walks of life to seek the devoutness appropriate to their calling:

Would it be fitting for a bishop to desire to be as retired as a Carthusian; and for married people not to lay by any more than Capuchins; if the artizan should be all day in church, like a monk; and the religious continually open to all manner of calls for the service of his neighbor, like a bishop; would not such devotion be ridiculous, unreasonable, and insupportable? … No, devotion, when it is true, inures nothing, but rather makes all things perfect: and when it runs counter to any one’s lawful vocation, then without doubt it is false devotion.

Things like “understand what you are praying” and “serve God in your own secular vocation” had been said before, but Francis de Sales said them especially well in light of the bracing challenge of established Protestantism.

Though the anti-Protestant de Sales has been called “the most unecumenical saint in the calendar,” his writings also include a great deal of “mere Christianity” for everybody to love.

The most durable of his works are the Treatise on the Love of God, which peers as deeply into essential Christian doctrine as de Sales ever did, and the famous Introduction to the Devout Life from 1608.

The Introduction is framed as a series of letters to Philothea, meaning “lover of God.” It features a classic discussion (in part 2, chapter 2) of how to meditate in God’s presence. Evangelicals like Simon Chan and Peter Toon have pointed to this section as one helpful model of Christian meditation, especially on the subject of recalling the presence of God. The central chapters begin with the memorable exhortation, “place yourself in the presence of God. Humble yourself and implore his assistance.” Unfortunately, these key chapters also end with the memorable exhortation, “make your spiritual nosegay,” which apparently meant something in the seventeenth century.