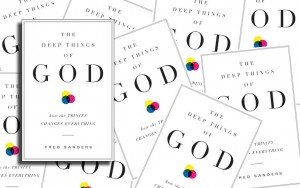 August 31, 2010, is the official release date for my new book, The Deep Things of God: How the Trinity Changes Everything. It ought to be on bookshelves by then. But you can already order it now straight from the publisher, Crossway, or put it on pre-order at Amazon, Barnes and Noble, or CBD. Matt Anderson has even managed to have a contest and give away free copies already!

I’ve written about the Trinity before, from comic books to hefty academic stuff only fit for specialists, and of course on this blog. But Deep Things is my first major book for ordinary Christians on the subject I care most about. I’ve devoted my life and ministry to giving this doctrine the attention it deserves, and I’m very excited to be releasing the best book I could write on it.

I’ve done a few interviews about it already (you can read the ones with Michael DeBusk and Andrew Faris online). Further information about upcoming promotional events is posted below.

But for Scriptorium readers, I wanted to post an excerpt from the first chapter here, to give you a taste of what the book is like. Here is a section on “Three Good Questions about the Doctrine of the Trinity,” and a glance at how I approach them.

The kind of trinitarianism that we need is not simply the acceptance of a doctrine. The doctrine of the Trinity is not, in the first instance, something to be constructed by argument from texts. At best, that method will lead to mental acknowledgement that “the trinitarian theory” best accounts for the evidence marshaled.

The first step on the way to the heart of the trinitarian mystery is to recognize that as Christians we find ourselves already deeply involved in the triune life, and need only to reflect rightly on that present reality. Most evangelical Christians don’t need to be talked into the trinitarian theory, they need to be shown that they are immersed in the trinitarian reality. We need to see and feel that we are surrounded by the Trinity, compassed about on all sides by the presence and the work of the Father, the Son, and the Holy Spirit. From that starting point, truly productive teaching can begin.

There is certainly a time and place for introducing the words, concepts, propositions, and truth claims of trinitarian theology. But too often in contemporary teaching about the Trinity, those words not only come first; they come first, last, and exclusively. The Trinity seems to most evangelicals like a doctrinal formula to be received and believed by a mental act of understanding. In short, it is at best a true fact about God that we hold in our minds in the form of words. Teaching about it is then a matter of using words to lead learners to more words. “Words, words, words,” was Prince Hamlet’s reply when he was asked what he was reading, but that was hardly a sign of a balanced mind or a generous spirit.

A Christian who is reading about the Trinity ought to be able to say he is reading more than “words, words, words.” Evangelical commitment to the Trinity should not stay confined to the realm of verbal exercises; it ought to dive deeper and rise higher than the power of words. It ought to begin from the experienced reality of the Trinitarian grace of God, and lead us to a deeper encounter with the Father, Son, and Holy Spirit.

A merely verbal approach to the Trinity is doomed to be shallow, weak, and brittle, because it will be no stronger than our own ability to understand and articulate what we are thinking about. This is in fact the plight that much evangelical trinitarianism finds itself in at the popular level. As I have taught in various churches about the doctrine of the Trinity in the past twelve years, I have tried to answer the top three questions that evangelicals bring with them about the Trinity: Is it biblical? Does it make sense? And does it matter?

These are all good questions, and deserve the most helpful answers a theologian can bring to a congregation. But I have learned that if the first two questions are answered only at the level of verbal maneuvers, the third question has a tendency to loom impossibly large. The question “is it biblical” can be answered by a congeries of Bible verses proving various elements of the doctrine. First we provide biblical proofs of the deity of the Son, then the deity of the Spirit, then the personhood of the Spirit, then the distinction between the Father and the Son, then the distinction between the Son and the Spirit, and so on, either beginning or ending with biblical proof of the unity of God. It is possible to catch a glimpse of the deeper trinitarian logic of the Bible’s total message through this approach, but when time is short, the biblical proof of the Trinity is reduced to a verse-by-verse affair.

That leads to the second question, “Does it make sense?” There are a few satisfying, logical distinctions to make here, especially in pointing out that God is not one something and also somehow three of the same somethings (which would be a strict, logical contradiction), but one being in three persons (which still requires further explanation, but is not simply a contradiction). But the apparently inevitable next step in pursuing the question “Does it makes sense” is the sub-question, “What is the best analogy for the Trinity?” This sub-question is usually the death-knell for trinitarianism’s relevance. Analogies can play a useful role in thinking about God, but when the hankering for an analogy arises right here, on the border between “Does it make sense” and “Does it matter,” it is usually a sign that trinitarian thinking has devolved into a verbal project for its own sake. It has become a matter of getting the right words, so they can lead us to more of the right words. Serial proof-texting gives way to broken analogies, confronting us with an unanswerable So What question.

How do we fall so quickly from three perfectly good questions (Is it biblical? Does it make sense? And does it matter?) to a form of discourse as hollow as an echo chamber? What is the difference between a belief in the Trinity that simply doesn’t matter, and one that changes everything?

What is needed is an approach to the doctrine of the Trinity that takes its stand on the experienced reality of the Trinity, and only then moves forward to the task of verbal and conceptual clarification. The principle is, first the reality, then the explanation. What goes wrong in so much popular discussion of the Trinity is that Christians approach the doctrine as if it were their job to construct it from bits and pieces of verses, arguments, and analogies. The doctrine itself seems to lie on the far side of a mental project. If the project is successful, they will achieve the doctrine of the Trinity and be able to answer questions like “why have three persons?” and “what is the Trinity like?”

But the right method would begin with an immersion in the reality of the triune God, and only then turn to the task of explaining. The words and concepts would then find their proper places in the context of a life that was marked by the recognized presence of the Father, Son, and Holy Spirit. This kind of teaching about the Trinity would not be a project of constructing a complex idea, but of unpacking a comprehensive reality that we would already find ourselves in the midst of as Christians.

What can be done to make the doctrine of the Trinity flourish in evangelical theology as if this were its own native soil? What would it take to inculturate trinitarianism in the culture of evangelicalism? I am arguing that we need to start with the resources at hand, right where we are. We know more than we can say about the Trinity, and we should not let ourselves be trapped into thinking that everything depends on our ability to articulate the mystery of the triune God. But we do need to be reminded that we are immersed in a Trinitarian reality. It is possible to be radically trinitarian without knowing it, or to have amnesia about one’s real status. We may be formed and schooled by a movement that came into being as the most consistently trinitarian force in the history of Christianity, but we can live in a way that is alienated from those trinitarian riches.

I’ll be doing more interviews about the book in coming weeks, and I’ll link here to the online ones. I’ll be talking with Greg Koukl on Stand To Reason Radio on September 5, and for Southern California residents, Craig Hazen and Biola’s Apologetics department will be hosting a local book release event on September 27. 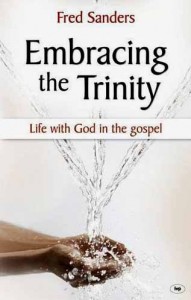 Here’s good news for UK readers: IVP-UK is publishing a British version, entitled Embracing the Trinity: Life with God in the Gospel. It should appear on September 17. Oops, make that 17 September, as they say over there.

I’ve always said that I’d go anywhere and talk to anybody about the Trinity. I may have to amend that boast temporarily during this busy time of the book release, when my full-time job keeps me from doing a book tour. But now that I’ve finally written down and published so much of what I have been saying in churches and classes for the last several years, I can send the book out to do my talking for me. And I’m also available by phone and e-mail for interviews, or for Los Angeles area events.